Viewers of the July 14th edition of BBC One’s ‘News at Ten’ saw a report from the BBC’s Middle East editor Jeremy Bowen relating to the Israel leg of the US president’s Middle East visit.

That report opened with a cynical dismissal of the Joint Declaration on the US-Israel Strategic Partnership signed earlier in the day by the US president and the Israeli prime minister as something that “had all been said before”.

Bowen quickly moved on with a visit to the Benaya Lookout near Misgav Am on Israel’s northern border, ignoring repeated violations of UN SC resolution 1701 in order to tell viewers that: 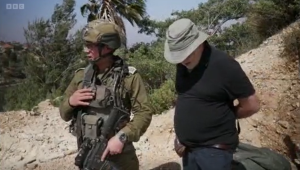 “Both sides here worked hard to keep the border quiet since Hizballah fought Israel to a standstill in a war in 2006.”

Bowen’s portrayal of how that war began erased the killing of eight Israeli soldiers and the kidnapping of two others in a cross-border attack by Hizballah as well as the simultaneous launching of rockets at civilian communities:

The anti-terrorist fence, including its minority walled sections, was of course constructed in order to reduce the number of terrorist attacks –  in particular suicide bombings – against Israelis during the second Intifada. The BBC’s Middle East editor however elected to erase the relevant issue of that terrorism from audience view, in line with his overall presentation of Palestinians devoid of all agency and responsibility who are just waiting for a solution to what he described as “the festering Israeli-Palestinian conflict”.

Viewers saw unexplained footage of Palestinians burning a poster of Joe Biden but Bowen did not bother to inform them of the demonstrations against Biden’s visit or the calls from various Palestinian factions to cancel Biden’s meeting with Mahmoud Abbas.

Against a backdrop of no fewer than four different shots of banners put up by the political NGO ‘B’tselem’, Bowen chose to amplify politically motivated ‘apartheid’ smears.

“Along Joe Biden’s route into Bethlehem – his next stop – are accusations that Israel is guilty of apartheid. Denied by the Israelis and the US, widely accepted by Palestinians and human rights groups.”

Bowen then proceeded to make an entirely unproven claim concerning the death of Shireen Abu Akleh: 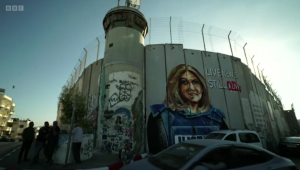 “And he’ll see many portraits of Shireen Abu Akleh, the Palestinian-American journalist killed by Israeli troops in May.” [emphasis added]

As we see, the BBC’s senior reporter on Middle East affairs was perfectly happy to abandon editorial guidelines on accuracy and impartiality in order to promote as fact speculation for which neither he nor anyone else has any proof, but which supports the politically motivated narrative to which he has obviously whole-heartedly self-conscripted.

THE BBC ME EDITOR’S PORTRAYAL OF ‘INTERNATIONAL LAW’