Earlier this week we noted the BBC Middle East editor’s promotion of a claim concerning the death of Shireen Abu Akleh on BBC One’s ‘News at Ten’ on July 14th.

“And he’ll [Joe Biden] see many portraits of Shireen Abu Akleh, the Palestinian-American journalist killed by Israeli troops in May.” [emphasis added]

Along with others, CAMERA UK submitted a complaint on that matter, pointing out that it has not been proven that Abu Akleh was killed by Israeli troops and that when the BBC’s Middle East editor makes such an inaccurate and overtly political statement, the damage to impressions of BBC impartiality is very serious indeed.

“Thanks [sic] you for contacting us about the News at Ten, broadcast on 14 July.

During our report on policy areas that would be on the agenda during Joe Biden’s visit to the Middle East, we briefly referenced the shooting of journalist Shireen Abu Akleh, and said she had been “killed by Israeli troops”.

The findings of the UN report published last month pointed to the shots that killed Abu Akleh as coming from the Israeli Security Forces, and the US investigation confirmed that this was likely to be the case, although it could not prove it forensically.

Although this was a general report rather than an examination of the circumstances of her death we would agree it would have been preferable to have referred to the investigations and the way their conclusions were phrased.

We have acknowledged this on the BBC Corrections and Clarifications website:
https://www.bbc.co.uk/helpandfeedback/corrections_clarifications/

We’ve shared your feedback with senior editors at BBC News.”

That correction – which interestingly does not mention the name of the journalist concerned – reads as follows: 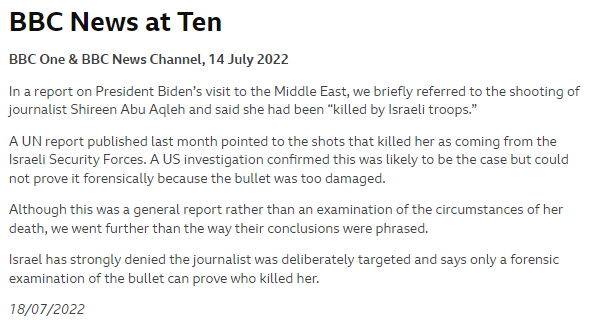 One can of course only wonder how many of the millions of viewers who watched that report from Jeremy Bowen will happen to visit the BBC’s ‘Corrections and Clarifications’ webpage and come across that ‘acknowledgement’.

BBC COVERAGE OF US STATEMENT ON ABU AKLEH INVESTIGATION