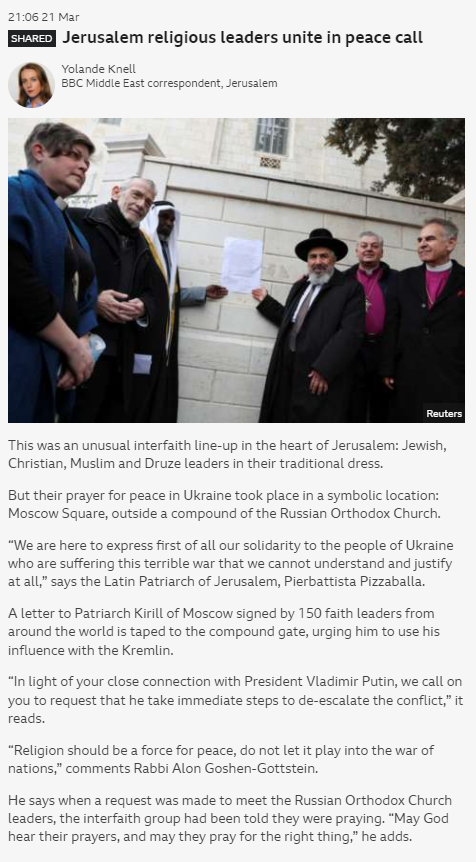 The same event was covered by local media including the Times of Israel and the Jerusalem Post, both of which provided additional information concerning the leader of the Russian Orthodox Church to whom the letter taped to the Jerusalem cathedral wall was addressed.

“Kirill, 75, is a close ally of Putin, sharing his vision of a muscular Russia defending traditional Christian values from an ostensibly immoral West. His public statements on the Ukraine-Russia war have been in line with Moscow’s official rhetoric.”

“Kirill, 75, a close ally of Russian President Vladimir Putin, sees the war as a bulwark against a West he considers decadent, particularly over the acceptance of homosexuality.

His full-throated blessing of the invasion has splintered the worldwide Orthodox Church and unleashed an internal rebellion that experts say is unprecedented.”

The National Catholic Reporter noted earlier this month that:

“Kirill, in a sermon delivered March 6 before the start of Orthodox Lent, echoed Putin’s unfounded claims that Ukraine was engaged in the “extermination” of Russian loyalists in Donbas, the breakaway eastern region of Ukraine held since 2014 by two Russian-backed separatist groups. Kirill focused virtually all of his talk about the war on Donbas — with no mention of Russia’s widespread invasion and its bombardment of civilian targets. […]

He contended that some of the Donbas separatists were suffering for their “fundamental rejection of the so-called values that are offered today by those who claim world power.”

He claimed that this unnamed world power is posing a “test for the loyalty” of countries by demanding they hold gay pride parades to join a global club of nations with its own ideas of freedom and “excess consumption.””

In 2009 the BBC reported on Kirill’s appointment as patriarch of Russia’s Orthodox Church and in 2012 BBC Monitoring noted his “support of President-elect Vladimir Putin”. In 2018 the BBC reported the church’s severing of diplomatic relations with the Patriarchate of Constantinople over its recognition of Ukraine’s Church as independent from Moscow.

We have however been unable to find any BBC coverage to date of Kirill’s support for the Russian invasion of Ukraine or the ensuing discontent among some Russian Orthodox church officials, with the exception of one rather vague item on a ‘live’ page concerning the arrest of a priest on March 7th.

Given that just one day prior to this report Yolande Knell had promoted the notion that Israel has taken a “somewhat neutral position” on Russia’s invasion of Ukraine, while alleging “ambivalence” and a “schizophrenic position” on its part, it would of course have been helpful to audiences had they been informed that the “letter to Patriarch Kirill of Moscow signed by 150 faith leaders from around the world” was initiated by Israeli NGOs which also organised the event in Jerusalem attended by Israeli religious leaders and clerics based in Israel.

Likewise, audience understanding of the story would certainly have been enhanced by the provision of more information about Patriarch Kirill’s “influence with the Kremlin” and his statements in support of Russia’s invasion of Ukraine.