Long-time readers may remember the Iranian regime apologist and English Literature professor Mohammad Marandi of Tehran University who has appeared in various items of BBC content in the past.

The lead item in the afternoon edition of the BBC World Service radio programme ‘Newshour’ on April 12th was presented as follows: 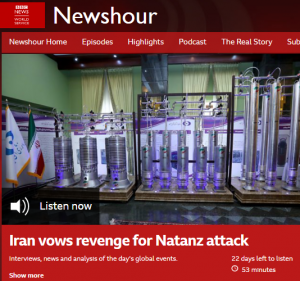 “The Israeli Prime Minister – Benjamin Netanyahu – has reiterated that Israel will not allow Iran to obtain nuclear weapons capability — a day after an attack on a nuclear facility in Iran, which Tehran has blamed on Israel. Mohammad Marandi, a political analyst in Tehran, told Newshour the attack will have an impact on the talks about the possible return of the US to JCPOA.”

Presenter Razia Iqbal set the scene (from 00:12 here) as follows: [emphasis in italics in the original, emphasis in bold added]

Iqbal: “We begin today with the possible fall-out from the power failure that struck the Natanz uranium enrichment site in Iran. Tehran says the plant was the target of what it calls nuclear terrorism and it’s pointing the finger at Israel. And, it will take revenge. The new advanced centrifuges to enrich uranium had just been activated there. Israel has not commented but public radio there cited intelligence sources as saying it was a Mossad cyber operation. In a moment we’ll hear from a former head of Mossad and we’ll also hear from Iran. Thousands of miles away from Israel and Iran, diplomats representing the signatories of the Iran nuclear deal are still in Vienna. Talks about the way in which the US can re-join the JCPOA will resume on Wednesday, which of course suggests the timing of the attack on Natanz could be significant.”

Listeners heard voiceover translations of statements from a spokesperson from the Iranian foreign minister and Israel’s prime minister before Iqbal introduced Marandi (from 02:21), who she has interviewed in the past.

Iqbal: “Well just before we came on air I spoke to Professor Mohammad Marandi. He is a political analyst with close ties to the government in Tehran. What can he tell us about what happened?”

Particularly given that this interview was pre-recorded, it is interesting to note which of Marandi’s claims Iqbal chose to challenge and which she chose to let stand unquestioned.

Marandi: “Well apparently it was an act of sabotage. It damaged one of the four or five halls in the Natanz site where older centrifuges were enriching uranium. What the Iranian government has decided to do in retaliation is so far to replace those older centrifuges with new state-of-the-art centrifuges. That will be their initial response. And they also believe that this act of sabotage was initiated by the Americans and the Israelis.”

Iqbal then asked whether it was a cyber attack or an explosion, to which Marandi replied that the latter is the case because “the facility itself is separated from the internet so it’s not possible to carry out a cyber attack”. Iqbal went on to ask how the incident had affected “Iran’s capacity to enrich uranium” before presenting her next point.

Iqbal: “OK and you mentioned that the Iranians are saying that it was the Americans and the Israelis who were behind it. What evidence is there for that?”

Marandi: “Well the Israelis have virtually through all of what has been said in their media and by their officials, they’ve virtually accepted responsibility for this act of war. And in all previous experiences Iranian intelligence has said that the Americans and the Israelis have always worked together. And the Israelis wouldn’t carry out an operation without American consent.”

Iqbal: “You described it as an act of war and we’ve heard from the foreign minister that Iran will take revenge. In your view, how will that manifest itself?”

Marandi: “Well the Iranians are very patient and therefore it’s difficult for me to say what sort of response there will be and when it will be. But I think the main question that people in Iran are asking is that how is it that the Israeli regime can bomb Syria and murder Syrian government soldiers who are fighting ISIS and Al Qaeda, they can bomb Gaza, they can fly over Lebanon with impunity and they can murder Iranian deputy government ministers and attack Iranian installations and no-one in Western Europe or North America or countries affiliated to the United States will say anything about it.”

Iqbal chose to ignore Marandi’s context-free references to ‘bombing’ in Syria and the Gaza Strip. She made no effort to try to ascertain to which incidents her interviewee was referring when he alleged that Israel had murdered “Iranian deputy government ministers” (plural) and whether in fact his claim refers to the 2013 shooting of the Iranian deputy minister of industry which was described by the police at the time as being related to “a personal motive”. Rather, Iqbal went on to promote a theme seen in additional BBC content.

Iqbal: “Let me ask you about the possible impact of this incident on the talks in Vienna which are an attempt to try and establish a roadmap for direct talks possibly between Tehran and Washington. Do you think that the timing of this is significant and what kind of impact do you think it’s going to make?”

Iqbal: “Well it’s supposition on your part that the Americans were completely aware that this was going to take place. I wonder what you think the motivation is of Washington to be complicit in something like this when alongside that they are saying that they are interested in re-joining the JCPOA and that they are going into these talks with a view to that being the outcome.”

Iqbal’s final question related to internal Iranian politics and a Tweet that Marandi had sent on the day of the interview. She then closed the item with a description of Marandi as “a political analyst who has close ties to government figures in Tehran”, once again without clarifying to which “government figures” she was referring.

As we see, while Iqbal challenged Marandi’s claims of American involvement in, or advance knowledge of, the incident quite robustly, asking for “evidence” and describing his allegations to listeners as “suppositions”, she failed to meet the same standard with regard to any of Marandi’s entirely predictable claims concerning Israel.