In part one of this post we saw how the BBC ignored a September 19th announcement by the Israel Security Agency concerning the arrests of seven members of a Hamas cell in Judea & Samaria. We also noted the BBC’s long-running failure to inform its audiences on the topic of Hamas’ efforts to undermine the Palestinian Authority in the areas that the Oslo Accords put under its control.

Interestingly, when two members of Hamas were arrested by PA security forces in Nablus (Schem) on September 20th, BBC journalists in the region swiftly took to Twitter to comment on that story. The BBC Jerusalem bureau’s Tom Bateman used footage from the Hamas affiliated Shehab News Agency and amplified Hamas talking points. 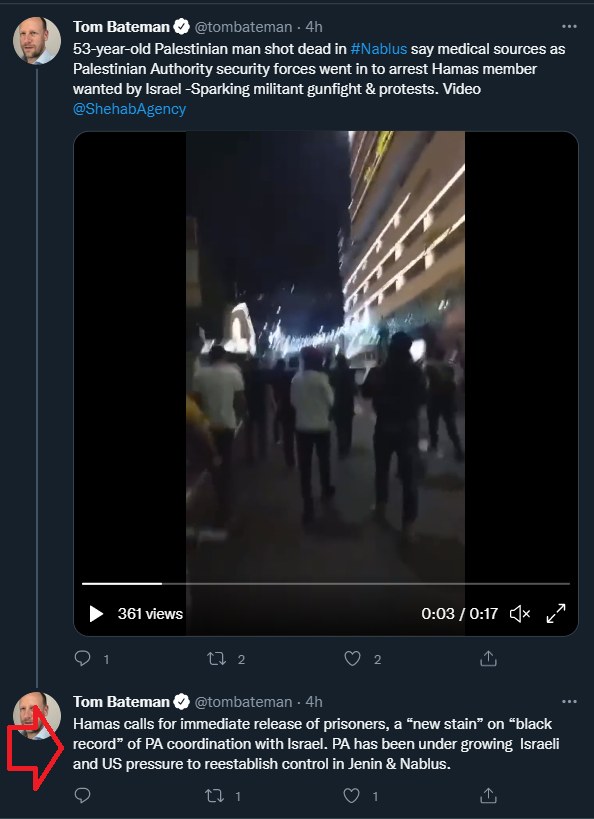 Later in the day the BBC News website published a report by Bateman headlined “Rare fighting between Palestinians and own police” which subsequently was wisely retitled “Palestinian raid sparks gunfights and protests”. 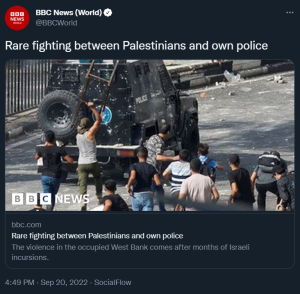 As is so often the case in BBC reports, the article’s opening paragraphs reflect its overall framing and take-away messaging.

Bateman begins by describing the men who were arrested by the PA security forces as “militants” despite both being members of the terrorist organisation Hamas, with one described by Palestinian sources as “close to a senior member of Hamas’s armed wing, Izaddin al-Qassam”: [emphasis added]

“There have been fierce gun battles in the city of Nablus in the occupied West Bank, after Palestinian security forces arrested militants wanted by Israel.”

Only in paragraph nine does Bateman get round to informing readers that one of those arrested “was described by Hamas as one its senior members”.

That framing clearly excludes from audience view the issue of the threat posed to the Palestinian Authority by Hamas as well as the fact that, as recently noted at the INSS, the PA has on occasion taken action “against Hamas efforts that the PA leadership sees as threatening its stability and its very survival”.

In paragraph three, Bateman frames Palestinian dissatisfaction with the ruling Palestinian Authority solely as a product of Israeli counter-terrorism operations:

“It marks a further deterioration of security in the West Bank and is a sign of growing dissatisfaction among Palestinians with their leadership, after months of Israeli incursions.”

The reality of a city overrun by armed young men belonging to competing terrorist factions (or none) and the resulting harm to the local economy is not part of Bateman’s portrayal of the story. He goes on:

“The atmosphere in the cities of Nablus and Jenin has grown more volatile as ordinary Palestinians contend with near-nightly raids by the Israeli army, sparking gun battles with increasingly well-armed militants, while control by the PA has been disintegrating.”

No explanation of how those “militants” have become “increasingly well-armed” is provided and Bateman avoids the topic of why PA control “has been disintegrating”, including factors such as the actions of Fatah’s military wing, the terror attacks carried out by members of the PA’s own security forces and the political rivalry within Fatah.

“Since January, more than 90 Palestinians, including militants and civilians, have been killed in the West Bank, mostly by Israeli security forces.”

In fact, the majority of those killed were members of terrorist organisations or people who chose to engage in violent rioting or terror attacks.

Bateman’s report includes the uncritical promotion of talking points from both Hamas and the Palestinian Authority which he does not bother to unpack: 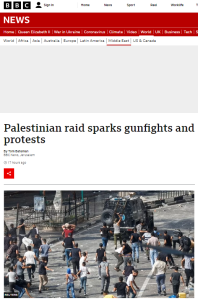 “Meanwhile, the militant group Hamas accused its rivals in the Western-backed Palestinian Authority (PA), which governs parts of the West Bank, of a “national crime” by carrying out the raid.”

“Israel and the US had been putting pressure on the PA to re-establish control in the northern West Bank. PA officials responded that Israel’s growing incursions were undermining their authority.”

Bateman closes with a dubious portrayal of the PA’s obligations to combat terrorism under the terms of the Oslo Accords which again amplifies the talking points of terrorist organisations:

“Under agreements dating back to the Oslo peace accords of the 1990s, Israel and the PA conduct security co-ordination, one intention of which was to marginalise Hamas and other militant groups to allow the PA to rule effectively and to prevent attacks against Israelis.

But the process is opaque and is denounced by the PA’s critics.

Politically, the security co-ordination has often suited the Palestinian leadership, which is dominated by President Abbas’ Fatah movement, rivals of Hamas. But it has always been controversial.

Militant groups and many ordinary Palestinians argue that in practice it reduces the PA to a secondary security force bolstering Israel’s military occupation.”

At the bottom of this article readers find a report by Bateman filmed in July in Jenin (part of which he also re-promoted separately on Twitter). As noted here at the time, in that report Bateman refrained from providing a proper explanation of the Palestinian Authority’s loss of control over certain parts of Area A. Two months on, the BBC is still failing to provide meaningful information on that topic and continues to avoid core issues including Fatah’s Al Aqsa Martyrs Brigades, terrorism by members of the PA security forces and Hamas’ efforts to undermine the Palestinian Authority.

Instead, Bateman chooses to amplify partisan talking points – including from anonymous sources – while yet again painting an overall picture of “Israeli incursions” as the prime factor responsible for the increasingly volatile situation in areas under PA rule. Once again, however, BBC audiences saw no serious analysis of the rise in terrorism which has prompted those Israeli actions.