Since the beginning of the year the BBC News website has published two reports about Israeli counter-terrorism operations against members of the Al Aqsa Martyrs Brigades terrorist group:

“The military wing of the Palestinian Fatah faction confirmed that the dead men were its members and said they were killed in “a cowardly assassination”.” 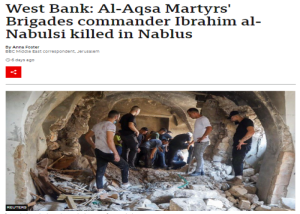 August: BBC NEWS GETS OUT THE SCARE QUOTES IN REPORT ON COUNTER-TERRORISM OP

“The al-Aqsa Martyrs’ Brigades is a network of militias linked to Fatah, the Palestinian movement which controls the West Bank.”

Another BBC report from June failed to clarify AAMB involvement.

Despite the fact that the BBC obviously knows that the Al Aqsa Martyrs Brigades is part of the Fatah faction which dominates the Palestinian Authority and the PLO and which is headed by the Palestinian president, audiences have seen remarkably little coverage of that terror group’s recent activities.

Recent incidents such as a shooting attack on a bus on September 4th which was claimed by the Al Aqsa Martyrs Brigades, the fatal involvement of an AAMB commander in a gunfight in Jenin or the arrest in Jaffa of a would-be Palestinian terrorist who was carrying a banner with the logo of a group called ‘The Lion’s Den’, which is apparently connected to the Al Aqsa Martyrs Brigades, have not received any BBC coverage.

The corporation has also been muted on the topic of growing number of members of the Palestinian Authority security forces who have taken part in armed clashes with the IDF or terror attacks. As noted by the FDD’s Joe Truzman:

“The evidence suggests the PA is ostensibly losing control of its security services. While the number of PSS members launching attacks against IDF troops has not reached the level of the second intifada, the upward trend should be noted.” 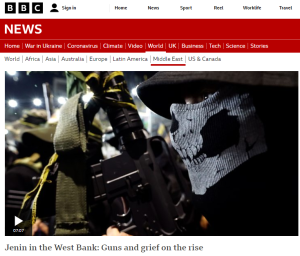 When the BBC Jerusalem bureau’s Tom Bateman published a report from Jenin in July of this year we noted that BBC audiences had at that point seen no serious coverage of the relevant topic of the Palestinian Authority’s loss of control over that part of Area A, where it is responsible for both civil affairs and security.

Bateman’s report did nothing to compensate for that chronic omission beyond veiled references to the Jenin refugee camp as “a place where the official Western-backed Palestinian security forces are not welcome” and “ungoverned spaces”. No substantial reporting on that topic has been seen since, despite its growing importance, not least in light of calls by terrorist organisations to step up the violence.

Writing at the INSS just after the September 4th attack, Kobi Michael described the situation as follows:

“The attack on the bus is part of a trend evident since March 2022, which began with terrorist attacks within the State of Israel. The Jenin region became the export center of the terrorist actions, after a long period during which Islamic Jihad, with the funding of Iran and Hezbollah and with their active assistance in smuggling weapons into the West Bank, succeeded in becoming the strongest and most significant organization in the area. The organization, which is operated as an Iranian proxy, is free of any commitment or responsibility toward the local population. The purpose of its existence is adherence to the idea of armed resistance, and it is an important and convenient means for Iran to undermine stability in the region and enhance the struggle against Israel. The organization has established networks of collaboration with Hamas and with the Fatah armed militias, and it leads a systematic effort to recruit young people who do not necessarily belong to a particular organization, and others who have an organizational affiliation, to carry out acts of terrorism in exchange for (Iranian) money. The terrorism hub that operated from the Jenin region under the leadership of Islamic Jihad has migrated to the Nablus region due to the difficulties created by the Israeli security forces, who operated intensively in the region, but it has not entirely died out. Evidence of this is that the perpetrators of the bus attack came from the area. […]

Alongside Islamic Jihad’s ongoing effort, Hamas has continued its military buildup efforts in the region under the direction of Saleh al-Arouri. For their part, Fatah’s al-Aqsa Brigades have continued to distinguish themselves from the Palestinian Authority and joined the armed struggle, both against IDF forces operating on the ground and in the effort to carry out terrorist attacks. In the spirit of the traditional cooperation between the organizations in the Jenin region, the cooperation between the organizations has deepened. […]

…this is an expanding cognitive struggle that is fed by the increased violent friction with IDF forces, by the sense of success, and in particular by the governmental vacuum of the Palestinian Authority. The image and standing of the PA have been severely undermined in the eyes of the Palestinian public due to its failure to advance the national vision and to offer a political horizon. The governmental vacuum is reflected in part in that the Palestinian security apparatuses prefer to refrain from taking determined action against the armed militias – aside from exceptional cases against Hamas efforts that the PA leadership sees as threatening its stability and its very survival. This is also the background to the involvement of operatives from the security forces or their children in the terrorist attacks. The extent of this phenomenon, even if it still relatively small, is worrisome and indicates the difficulty facing the security apparatuses in taking action against these efforts.”

The IDF Chief of Staff recently commented on the same issue:

“Military chief Aviv Kohavi on Monday slammed the Palestinian Authority for its inability to govern areas in the northern West Bank, where troops have repeatedly come under gunfire during nightly raids, during a months-long operation aimed at preventing Palestinian terrorists from committing attacks. […]

“Part of the increase in terrorism stems from the helplessness of the Palestinian Authority security forces, leading to a lack of governance in certain areas of Judea and Samaria, and these are fertile grounds for terrorism,” Kohavi said, […]

He was referring to the northern West Bank cities of Jenin and Nablus, where recent reports have said the Palestinian Authority warned it is losing control to terror groups.”

In addition to the sporadic reporting that the BBC has been producing since early this year on the topic of Israeli counter-terrorism operations in Judea & Samaria, it would obviously be helpful for BBC audiences to see some broader coverage of the situation which would enhance their understanding of the factors at play, including foreign funding for terror, the failure of the Palestinian Authority to meet its Oslo Accords obligations regarding terrorism and the uptick in involvement in terrorism by members of the PA security forces and Fatah’s Al Aqsa Martyrs Brigades.