Back in June we documented a BBC News website report which failed to provide adequate information on its topic of remarks made by a Labour councillor in the UK: 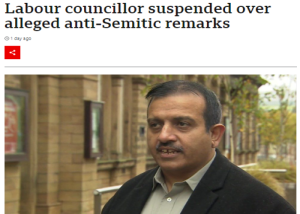 “…rather than accurately reporting Mohammed Iqbal’s comments in a manner that would enable readers to understand why he has been suspended pending investigation, the BBC instead chose to paraphrase his remarks in a vague way that hinders comprehension.”

CAMERA UK submitted a complaint concerning that report two days after its publication. On June 20th we were informed that it would take more time to address the issue and on July 11th the BBC contacted us to say that the time frame had expired.

On October 4th – nearly four months after the complaint was made – we received the following response:

“Thank you for getting in touch about our article Labour councillor suspended over alleged anti-Semitic remarks and please accept our apologies for the very long and regrettable delay in our response.

You raise a fair point and we have amended the story to include the quote from Mohammed Iqbal which was reported in the Jewish Chronicle.

We have also added a correction note advising readers of the change.

Please accept our apologies for the oversight and thank you once again for getting in touch.”

The footnote appended to the report reads as follows:

While this correction is obviously welcome, the continued absence of a dedicated corrections page on the BBC News website means that people who read the original report (and will not randomly revisit it four months later) are unlikely to see it.