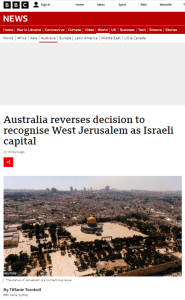 In relation to the actual story, readers are told that:

“Australia has reversed a decision made four years ago to recognise West Jerusalem as the capital of Israel.

Foreign Minister Penny Wong said the 2018 move had undermined peace and “put Australia out of step with the majority of the international community”.

She stressed that Australia remained a “steadfast friend” to Israel. Its embassy will stay in Tel Aviv.”

(In contrast, a BBC Radio 4 ‘Six O’Clock News’ bulletin on the same day – from 26:59 here – inaccurately claimed that “Canberra reversed its decision to recognise Jerusalem [sic] as the country’s capital”.)

The fiasco which preceded that announcement is presented to BBC audiences solely as a quote from the Israeli prime minister:

“In light of the way in which this decision was made in Australia, as a hasty response to an incorrect report in the media, we can only hope that the Australian government manages other matters more seriously and professionally,” Israeli Prime Minister Yair Lapid said in a statement.”

The fact that the Australian Foreign Minister had previously denied any reversal of the 2018 decision is not communicated to readers in the BBC’s own words.

Turnbull informs readers of the reaction of the PA prime minister:

“…Palestinian Prime Minister Mohammed Shtayyeh welcomed the “wise and bold decision”, which he said expressed “Australia’s respect and alignment with the values of truth, justice and freedom, and the legitimate rights of the Palestinian people, sanctioned by international legitimacy”.”

She does not however report the similar reactions of two Palestinian terrorist organisations that are designated by Australia.

The “narrative” on Jerusalem mentioned in that PIJ statement is of course remarkably similar to the one repeatedly promoted by the BBC over the years, including in this report:

“The status of Jerusalem is one of the most sensitive issues, at the heart of the Israeli-Palestinian conflict.”

Turnbull amplifies a misleading claim about a supposed reversal of “decades of American foreign policy”:

“Then-US President Donald Trump drew international criticism in December 2017, when he reversed decades of American foreign policy by recognising the ancient city as Israel’s capital. The US embassy was relocated from Tel Aviv to Jerusalem in May 2018.”

That same misleading claim has been repeatedly made by the BBC in the past, including in its 2018 reporting on the original decision of the then Australian government. As we noted at the time:

“In 1990 the US Congress passed a resolution stating that it “acknowledges that Jerusalem is and should remain the capital of the State of Israel”.

Five years later the US Congress passed the ‘Jerusalem Embassy Act of 1995’ – a law declaring that “Jerusalem should be recognized as the capital of the State of Israel; and the United States Embassy in Israel should be established in Jerusalem no later than May 31, 1999.”

In June 1997 the US Congress passed a resolution stating, inter alia, that it “calls upon the President and the Secretary of State to affirm publicly as a matter of United States policy that Jerusalem must remain the undivided capital of the State of Israel”.

In June 2017 the US Senate unanimously passed a resolution stating that “Jerusalem should remain the undivided capital of Israel in which the rights of every ethnic and religious group are protected”.

And yet the BBC’s Sydney correspondent – like many of his colleagues before him – would still have the corporation’s audiences believe that “President Trump overturned decades of US neutrality” in December 2017 while failing to clarify that presidential waivers of the Jerusalem Embassy Relocation Act were signed on the grounds of protecting the national security interests of the United States rather than for reasons of “neutrality”.”

Turnbull promotes a link to a problematic report by Yolande Knell from last month:

“The UK is currently considering moving its embassy to Jerusalem. Honduras, Guatemala and Kosovo are the only countries other than the US with embassies in the city.”

At the bottom of her article a 2017 backgrounder by Knell on Jerusalem – plagued by inaccuracy and omission – is promoted.

The final two paragraphs of Turnbull’s report are apparently intended to provide readers with background to the story:

“While Israel regards Jerusalem as its “eternal and undivided” capital, the Palestinians claim East Jerusalem – which Israel occupied in the 1967 Middle East war and effectively annexed in 1980 – as the capital of a future state.

Israeli sovereignty over Jerusalem has never been recognised internationally, and according to the 1993 Israel-Palestinian peace accords, the final status of Jerusalem is meant to be discussed in the latter stages of peace talks.”

As is standard BBC practice in any report about the status of Jerusalem, Turnbull’s account fails to inform readers of the inclusion of Jerusalem in the territory assigned by the League of Nations to the creation of a Jewish homeland. It also excludes the 1948 belligerent Jordanian invasion and subsequent ethnic cleansing of Jews who had lived in Jerusalem for generations from districts including the Old City, together with the destruction of synagogues and cemeteries, as well as the fact that the 1949 Armistice Agreement between Israel and Jordan specifically stated that the ceasefire lines were not borders.

The BBC has been covering the topic of the recognition of Jerusalem as Israel’s capital since late 2016. Throughout those nearly six years, the full range of background that would help audiences understand these stories has been serially withheld. It is entirely obvious that the BBC’s chosen framing of this topic is not intended to meet its obligation to “provide accurate and impartial news, current affairs and factual programming of the highest editorial standards so that all audiences can engage fully with issues across the UK and the world” but to advance a politically motivated narrative.

IN WHICH BBC RADIO 4 RE-DIVIDES JERUSALEM