A Guardian op-ed by Australian academic Lana Tatour (“Australia’s decision not to recognise West Jerusalem as Israel’s capital is welcome – but hardly enough”, Oct. 22) included the charge that Israel is engaged in “ethnic cleansing” of Palestinains in Jerusalem.

The Old City and entire neighbourhoods in Jerusalem such as Sheikh Jarrah, Silwan and Jabal Al-Mukaber are facing ethnic cleansing policies, with hundreds of families facing the threat of expulsion.

Tatour is an anti-Israel activist who considers all Israeli Jews (even those within 1949 boundaries) “settlers”, and expressed support for a Palestinian journalist named Shatha Hammad who was recently stripped of her Thomas Reuters Foundation award after it was revealed she praised Adolf Hitler.

Regarding east Jerusalem, the area Tartour is referring to, the section of the city where all Jews were illegally expelled by the Arab Legion during the 1948-49 War, the suggestion that Palestinians there are being “ethnically cleansed” is completely untrue.  As the following statistics alone – from the Jerusalem Institute for Policy Research (JIPR) – show, the proportion of Palestinians and Jews in that area of the city has remained fairly steady over the last 40 years – at a 3:2 ratio.

Here are some more revealing graphs from the JIPR: 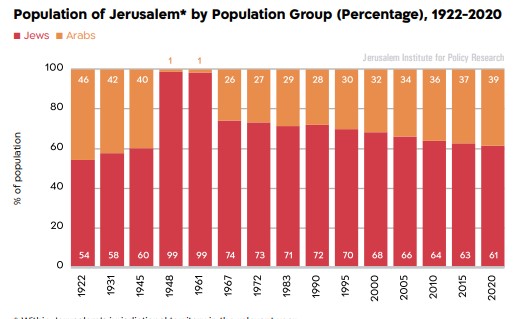 Tatour’s allegation is an egregious lie, and the fact that it wasn’t flagged by Guardian editors is just another example of the outlet’s indifference to accuracy when it comes to their promotion of the pro-Palestinian narrative.