In the context of this blog’s continuing communication with the Guardian over factual and historical inaccuracies in their reporting on Israel and the Middle East, one recent communication seemed straight forward enough.

We pointed out to Guardian editors that a report, “10 highlights of Palestine“, by Sarah Irving, Guardian, Nov. 18th, which including the following passage, was categorically false.

Granted, tourism to Palestine still faces many challenges, not least the Israeli border authorities who control all routes into the West Bank and Gaza.

As we posted shortly after Irving’s story was published, Israeli border authorities certainly do not control all routes into Gaza, as the territory borders Egypt, which controls Gaza’s Rafah crossing.

We discovered this cartographical omission by use of our blog’s highly advanced satellite technology (Google Maps), which demonstrated the following: 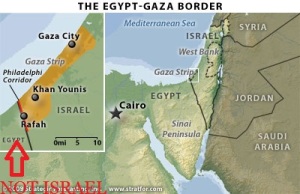 Today, the Guardian updated the geographically challenged passage, and the post now adds as an addendum :

This article was amended on 15 December 2011. The original said the Israeli border authorities controlled all routes into the West Bank and Gaza. This has been corrected.

After nearly a month of no doubt exhaustive research, the Guardian (and perhaps Sarah Irving) has discovered a route into Gaza not controlled by Israel.