Beneath the Guardian’s Middle East Live Blog (Syria crisis: Erdogan threatens military retaliation) on June 26 was a standard off-topic, incoherent diatribe which managed to focus most of its malign energy squarely at the desired Zionist target.

However, while you can jump to the last line to read the rant’s comical crescendo, please note the creative characterization of Zionists, (underlined in red) in the second line, who he/she knows is behind calls for military intervention in Syria. 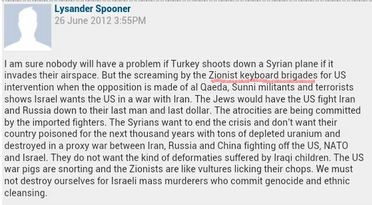 So, just for fun, I Googled “Zionist Keyboard Brigades” to see if there would be any direct hits and, sure enough:

The first link takes you to a site called ‘Before It’s News’, and a piece titled, “Zionist Corporate Media Censoring Syrian War“, and includes this pearl of wisdom:

“The media reports from the corporate Zionist media are being heavily censoring to prevent posters who know the truth from commenting on the comments portion of the news stories that are aggregated through such news aggregators as Google News, Yahoo and Microsoft.  Post after post by the Zionist keyboard brigade shows them making ridiculous accusations, inflammatory postings, bellicose statements,  disseminating pro-war and anti-Iranian propaganda is also being supported by the media deleting those who know and post the truth about what is going on in Syria.

The second hit, from a readers’ forum for mountain bikers (don’t ask), provides some further clarification on the term:

“Zionist Keyboard Brigade[s]...They have websites who monitor other websites who criticize Israel, and these Keyboardists try to make it seem that there’s more support than there actually is and try to obfuscate the reality on the ground, the brutality, the objectives, the Zionism. “

Hmmm…A Zionist blog which arduously monitors another site obsessively critical of Israel.  Which site could this commenter have in mind?

Alright, that’s enough fun for one day fellow “Keyboardists”. Back to trolling beneath the line at that “other site” to make it seem (to those untrained in the insidious art of Zionist villainy) that there’s more support for Zionism than there actually is, and obfuscating the ugly, brutal Israeli reality on the ground!

Like Loading...
Tags from the story
Anti-Zionism, Comment is Free, Delegitimization, Guardian, Uncategorized
Written By
Adam Levick
More from Adam Levick
In Douglas Murray’s latest piece for The Spectator, he asked whether Jews should...
Read More

0 replies on “CiF reader comment of the day: On “Zionist Keyboard Brigades””