Anyone getting their Middle East news from the BBC – as millions of people from around the world do – will be able to tell you without a shadow of doubt that the overriding factor preventing peace in the region is what the BBC recently so quaintly termed “settler homes“. The reason for such certainty is the intensive promotion of that theme by the BBC – see for example here, here, here, here and here – just from the past five weeks.

But the mirage is not only created by the regular repetition of that specific theme; its construction and maintenance also depend upon the diligent failure to inform BBC audiences about  things going on in the Middle East besides Israeli building tenders.

It is currently summer camp season in the Middle East and, as in past years, parents in the Gaza Strip have the choice of sending their children to a variety of activities organised by different groups – some of which are proscribed terrorist organisations – as documented by the Meir Amit Intelligence & Terrorism Information Center.

“At the beginning of June 2013 Hamas announced the opening of this year’s summer camp project. The theme this year is “The generation of the return” [i.e., the return of the Palestinian refugees to Israel]. According to Khalil al-Haya, a member of Hamas’ political bureau, an estimated 100,000 Gazan children will participate in the camps. He said the camps’ objectives were “to unite the younger generation with the homeland,” “to make religion attractive” and “to instill educational values.” According to Musa al-Samak, chairman of the high summer camp committee, there are 700 summer camps throughout the Gaza Strip with activities which will end before the Muslim religious month of Ramadan (Safa News Agency, June 8, 2013).

The ceremony opening the Hamas camps was attended by Ismail Haniya, head of the de-facto Hamas administration, and other senior Hamas figures. Haniya said that the objective of the camps was to instill the campers with values to strengthen their morals and spread the spirit of jihad (Al-Ra’i, June 9, 2013). He also said “Israel has no future in the land of Palestine” (Al-Aqsa TV, June 9, 2013).”

“The PIJ runs its own camps throughout the Gaza Strip where semi-military training and education are emphasized. This year their theme is “The generation of faith,” and each camp session will last two weeks. Campers – including the very young – receive military training and learn how to use weapons. The organization has provided broad media coverage for the camp activities (possibly to compete with Hamas and other organizations running camps).

On June 12, 2013, a ceremony was held to mark the end of the PIJ’s first camp session in Rafah. It was filmed by an Agence France-Presse correspondent who had been invited to the ceremony (PIJ military-terrorist wing website, June 12, 2013). The ceremony was military and the children demonstrated the various military skills they had acquired, including firing live ammunition, simulating the abduction of an Israeli soldier (See pictures below.).

According to one of the camp counselors, the objective of the camp was to train a younger generation familiar with the PIJ’s goal of fighting the “Zionist enemy” and a generation faithful to the Qur’an, a concept commanded by PIJ founder Fathi Shqaqi. The counselor said that the camp sessions were in great demand. A 12 year-old camper said that “Today I feel joy at joining the PIJ. I desire to receive military missions in the future and to be like the great shaheeds…the Zionist enemy will not overcome our people, who have been raised on the fundamentals of the Qur’an and on the love of death for the sake of Allah. My father’s blood was not shed in vain. Today I shoot my first bullet. My blood burns in my veins and will not cool until I am on the battlefield fighting the enemy” (PIJ military-terrorist wing website, June 12, 2013).” 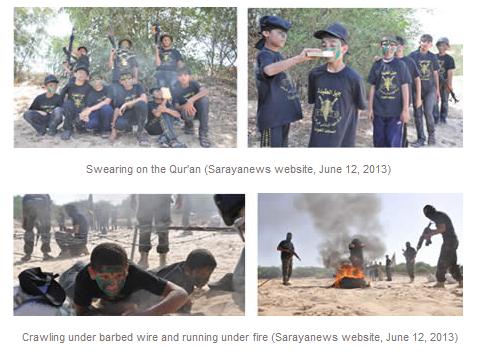 AFP also has a short film about one of the Hamas camps. Note the logo on the large sign shown at the beginning of the film and on the children’s t-shirts, in which Israel is erased completely.

The BBC has so far studiously avoided telling its audiences about these terrorist-run summer camps in which tens of thousands of children are indoctrinated annually with pathological hatred and the belief that Israel will cease to exist. A Google search for ‘BBC & summer camps Gaza Strip’ turns up three results – all of which refer to attacks on UNRWA summer camps in previous years.

As long as the BBC continues its campaign to shape audience perceptions by censoring coverage of real obstacles to peace such as the indoctrination of the next generation of its rejectors, BBC coverage of the Middle East cannot comply with its professed standards of accuracy and impartiality and it will not fulfill the “Public Purpose“ defined in its charter of building “a global understanding of international issues”.