The latest episode of the BBC World News programme ‘Talking Movies’, presented by Tom Brook, includes an item about Lebanese director Ziad Doueiri’s film “The Attack” which was also featured on the ‘Entertainment & Arts’ page of BBC News website.

As stated, the film has been banned in Doueiri’s native Lebanon – ostensibly because he filmed it in Israel – and also (in what these days must be a rare show of unanimity) by the entire Arab League.

“The Arab League ban was not limited to commercial theaters, Doueiri said. He said his wife was warned that if she proceeded with a screening for friends in Beirut she would be arrested. “So we canceled it,” he said.”

Oddly though, such reactionary attitudes – and the type of archaic censorship they impose – do not appear to cause too much concern to the ‘liberal‘ BBC, with Brook even suggesting to Doueiri:

“Looking back – might it have been prudent in a way not to have filmed in Israel?”

Apparently in order to present an impartial view of the subject, Brook interviews a film critic who presents the side of the argument according to which the film should not have been banned in Arab League member countries. To get the opposing view, however, Brook does not bring either the voice of the Lebanese government or the Arab League to his report, but instead features an interview with Andrew Kadi, whom he presents in very euphemistic terms.

“Palestinian rights activist Andrew Kadi is boycotting the film. He refuses to see it. He believes the director took the wrong course of action.”

“By Ziad Doueiri going to Israel, hiring Israeli staff …emm… and making a film where in fact he couldn’t get a Palestinian to play the part – one of the starring roles – and so he got a Jewish Israeli to play a Palestinian – this was extremely problematic. He violated what both Lebanese people and the Lebanese government were calling for, which was not having relations with the State of Israel.”

It is difficult to imagine that the BBC would elect to describe a member of the EDL or BNP as an ‘English rights activist’ and even more doubtful that it would bother to run an interview with such a person in which he objected to, say, a mixed-race actor playing the part of an Englishman.  But Andrew Kadi’s no less archaic and reactionary opinions are nevertheless given BBC airtime and notably, his actual activities are disguised behind the cuddly term “Palestinian rights activist”. 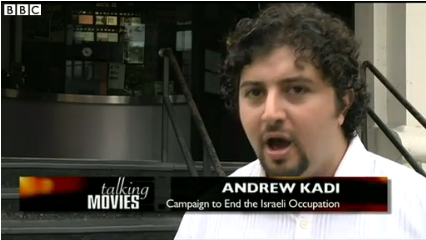 caption, but which will of course mean nothing to the vast majority of viewers. He is also an activist with Adalah-NY and a member of Al Shabaka. As such, Kadi is active in the Boycott, Divestment and Sanctions (BDS) campaign, with one of his most recent activities being the (failed) attempt to persuade Alicia Keys to cancel her concert in Israel.

Of course the BDS campaign is no more about ‘Palestinian rights’ than the BNP is about ‘English rights’: the end game of the BDS campaign is in fact to deny the Jewish people the right of self-determination in their own state.  Oddly, the BBC’s ‘liberal bias’ apparently does not equip it with the ability to recognize the BDS campaign’s anti-liberal foundations even after such a reactionary rant from Andrew Kadi and so the BBC willingly provides a platform for the promotion of BDS.

According to the BBC’s Editorial Guidelines, audiences have the right to be informed of a contributor’s political affiliations.

Tom Brook’s failure to make clear to audiences that the variety of bodies with which Kadi is associated are in fact active in campaigning to bring about an end to Jewish rights of self-determination is clearly a breach of those editorial guidelines and his misleading description of Kadi as a “Palestinian rights activist” further compounds that breach.