One of the more common false narratives regarding the Israeli-Palestinian Conflict advanced by the Guardian is that Ariel Sharon’s visit to the Temple Mount (the holiest site in Judaism) in 2001 “sparked” the 2nd Intifada – a lie repeated so often that casual observers could be forgiven for believing it.

Here’s a photo and caption from a 2006 Guardian story titled ‘Ariel Sharon: A life in pictures‘.

There’s also permanent content on the Guardian’s Israel page titled ‘The Arab-Israel Conflict‘, which consists of 22 photos illustrating the history of the conflict. Here’s the photo meant to illustrate the 2nd Intifada. 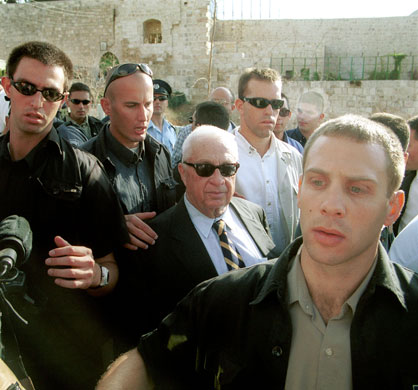 Most recently, David Shariatmadari, deputy editor on the Guardian comment desk, wrote a review (Guardian, Sept. 7) of a book titled ‘What do you buy the children of the terrorist who tried to kill your wife?’, by David Harris Gershon, which began thusly:

Jerusalem is a city electric with tension. There are frequent sparks, as the circuits that cross the city make contact, separate currents suddenly, dangerously flowing into one another. At their least serious, they ignite a monkish fight in the Church of the Holy Sepulchre. At their worst, they can set the region alight, as when Ariel Sharon visited the Temple Mount in 2000.

No matter how many times responsibility for the Palestinian violence which began in 2000 is assigned to Ariel Sharon, implicitly or explicitly, evidence abounds that the five-year war was orchestrated at the highest levels of Palestinian leadership.

A thorough report at the Jerusalem Center for Public Affairs by Jonathan Halevi included the following:

“Extensive testimony at the time and in retrospect demonstrates the Palestinian Authority’s role in initiating and managing the Second Intifada as an extensive terror onslaught, designed to impose a unilateral, unconditional withdrawal upon Israel, and improve conditions in anticipation of the battle for realizing Palestinian demands for the return of the refugees.

The final decision to initiate the Second Intifada was made by Yasser Arafat immediately upon the conclusion of the second Camp David summit, which ended on July 25, 2000. Directives were disseminated to the national security forces, instructing them to prepare for the immediate option of initiating a violent campaign against Israel.

Additional evidence that Ariel Sharon didn’t start the 2nd Intifada includes comments by Suha Arafat (and Palestinian leaders), in 2011, acknowledging that Yasser Arafat planned the terror onslaught, as well as the following interview with Suha in late 2012 on Dubai TV: