The caption to the photograph used to head early versions of the report (which also appears in later ones) states:

“The prisoners’ releases are deeply resented by families of their mainly Israeli victims”.

In fact, as those who have studied the list of prisoners provided by the Israeli Prison Service will be aware, in this particular round of releases, the number of Palestinian victims is higher than the number of Israeli victims. Like the rest of the Western media, the BBC however is determined to avoid exploring the subject of Palestinians murdered by Palestinians.

The article also claimed that:

“The prisoners were convicted of murder or attempted murder prior to the Oslo Accords and have served 19 to 28 years”.

As was noted here in our recent report on the subject, two of the prisoners were in fact convicted of murders committed after the signing of the Oslo Accords in September 1993. Shai Shuker was murdered by strangulation in February 1994 and Yosef Zandani was stabbed to death in his home in March 1994.

As the evening progressed, this report underwent many changes and now appears at the same URL under the title “Israel releases 26 Palestinian prisoners“. 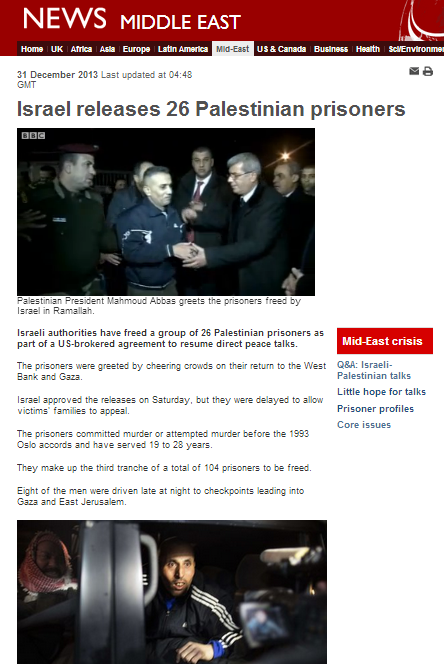 “The prisoners committed murder or attempted murder before the 1993 Oslo accords and have served 19 to 28 years.”

The article fails to adequately explain to audiences the political capital gleaned from these releases by the Palestinian president whose term of office expired almost five years ago (January 15th 2009) and the significance of the lavish public celebrations organized by the PA as a public relations attempt to bolster support for Abbas’ waning and divided Fatah party.

As was the case in past BBC reports on previous rounds of prisoner releases, the notion of terrorists and murderers as “heroes of the Palestinian cause” and “freedom fighters” is amplified, with no serious exploration of the effects of the glorification of terrorism and incitement which are central to such framing on the prospects for a viable end to the Arab-Israeli conflict.

“The Palestinian minister for prisoner affairs, Issa Qaraqai, dismissed the Israeli complaints, saying: “Israel is a murderous state and these prisoners are freedom fighters.” “

Previous BBC content relating to the prisoner releases in August and October 2013 has for the most part been notably economical with portrayals of the Israeli side of the story – see for example here and here – and has in general failed to make readers properly aware of the violent nature of the terrorist acts committed by the prisoners. In this latest article the Israeli side is presented by using second-hand information gleaned from an Israeli newspaper.

“Palestinians celebrate the releases as victories over Israel – something deeply resented by families of Israeli victims of political violence, our correspondent says.

Relatives of the victims of the latest prisoners being freed – 18 from the West Bank, three from Gaza and five from East Jerusalem – have staged days of protests against the releases and appealed to the Supreme Court to block them.

In the past, the court has allowed such releases to take place.

“One of the things we knew when we captured these detainees is that they needed to stay in prison for the maximum period,” Meir Indor of Israeli victims’ association, Almagor, told the Jerusalem Post.

“These men are time-bombs. Wherever they go they kill, because that’s the purpose of their lives.” “

Notably that choice of wording downplays terrorism by turning it into “political violence” and ignores the broad consensus within Israeli society – not just the victims’ families as implied by the BBC – which opposes the release of convicted terrorists, views Palestinian glorification of murderers in a negative light and has no confidence that these releases will do anything to improve the chances of success of talks with the PLO, particularly in view of the past experience of the high proportion of released prisoners known to have returned to terrorist activities.

Once again, the BBC’s reporting on this latest round of releases has failed to provide to audiences with any real insight into the views of the families of the victims of the released prisoners. With the list of those to be released having been published on Saturday night, the BBC had 48 hours in which to carry out interviews with relatives of their victims, but no such items have so far been produced. In contrast, a recent BBC News website article on the subject of the release of prisoners belonging to the Basque terrorist organization ETA in Spain included the following illustration, caption and text.

“Ms Carmen’s husband, Jesus Maria Pedrosa, was a Popular Party councillor in the Basque town of Durango. He was killed by Eta in June 2000.

“They shot him near where we live, with one bullet in the head,” she says. “I was listening to the radio at home and straightaway I knew it was him.” “

Towards the end of the BBC’s report comes the standard and inevitable introduction of the subject of Israeli construction plans, with the usual repetition of jaded and misleading mantras concerning “international law”.

“Our correspondent says that after the two previous releases, the Israeli government has sugared what the right-wing parties within its coalition regard as a bitter pill by making announcements about Jewish settlement plans in the occupied West Bank.

About 500,000 Jews live in more than 100 settlements built since Israel’s 1967 occupation of the West Bank and East Jerusalem. The settlements are considered illegal under international law, though Israel disputes this.”

Ramat Shlomo is of course a neighbourhood of Jerusalem which, according to any realistic scenario, will remain under Israeli control under the terms of an agreement between Israel and the PLO.  BBC audiences should of course be made aware of that fact in order for them to be capable of understanding that any building there is of no consequence.

Instead, the article goes on:

“Palestinians say continued settlement construction undermines the direct peace talks, which have shown little sign of progress since resuming in July after a three-year hiatus.”

Although it eagerly promotes that Palestinian view to its audiences, the BBC is predictably less interested in informing them of the undermining effects on the talks of Palestinian incitement and glorification of terror – as manifested in the PA-organised celebrations of the release of convicted terrorists and murderers of Palestinians and in addition to its daily stream of inflammatory official television programmes, sermons and statements.

One has no need of a crystal ball to appreciate that for months now, BBC News has been preparing the ground for future reporting of any collapse of the current talks by keeping audiences focused on one issue – that of Israeli building – whilst consistently ignoring the many other no less relevant factors at play.  That, of course, is an editorial decision inspired by a particular political viewpoint and it flies in the face of the BBC’s obligation under the terms of its Charter to provide audiences with information which will “enable individuals to participate in the global debate on significant international issues”.