The CST, the official body advising the UK Jewish community on matters of security and antisemitism, just released a comprehensive report on antisemitic discourse in the UK for 2011 and singled out the Guardian for opprobrium.  In fact, CST devotes an entire section of their 36 page report to the Guardian.

In 2011, the Guardian faced more accusations of antisemitism than any other mainstream UK newspaper.

Here are some specific highlights from the full report:

Concerns within the Jewish community and elsewhere regarding the Guardian, relative to other mainstream media outlets, have persisted for many years now – a situation that will probably worsen as the paper’s Comment is Free website grows.

Comment is Free website hosts many more articles than the Guardian’s actual print edition –and has lower editorial standards. Articles critical of Israel and its supporters are commonplace and routinely attract hundreds of comments from members of the public. Counter-articles are far less common.

Specific accusations of antisemitism against the Guardian itself usually arise from opinion pieces that reflect the hostility of the writer to Israel or those they associate with it. These articles are rarely, if ever, explicitly antisemitic. Rather, they usually contain remarks and attitudes that echo antisemitic motifs, such as Jewish conspiracies of wealth and power, and the notion that Jews are loyal to no one but each other. In their hostility, these articles afford little or no room for mainstream Jewish voices or perspectives.

[Not] innocent in the war of words about Jews and Israel

A March 2011 opinion piece in the Jewish Chronicle by its deputy editor, Jenni Frazer, appeared to capture the feelings of many Jews and mainstream UK Jewish communal bodies towards the Guardian. She wrote: “…I cannot count the number of complaints we have had from readers who do not understand the Guardian’s obsession with Jews and Israel, the poisonous letters or op-eds it publishes.”

Typifying the Guardian’s problems regarding antisemitism, according to the CST, were comment articles by Washington correspondent Chris McGreal, a piece by weekly columnist Deborah Orr and its coverage of the Sheikh Raed Salah deportation case. 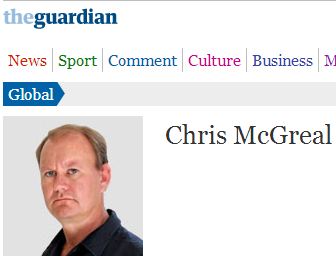 In an article concerning American Jewish voting patterns, senior Guardian correspondent Chris McGreal wrote: “Obama [told] American Jewish leaders that he would put some ‘daylight’ between the US and Israel after eight years of George Bush slavishly refusing to pressure the Jewish state to move toward ending the occupation.”Following protests that this risked reading as if former President Bush had somehow been a slave to Jews, the word “slavishly” was changed to“consistently”. The Guardian stated that this would“clarify the intended meaning” of the sentence.Given President Obama’s ethnicity, it seems unlikely that the Guardian would have allowed the word “slavishly” to be as readily used as in relation to former President Bush.

Nevertheless, the importance of conspiracy theory to antisemitism requires the newspaper (and others) to show sensitivity to risking such associations. In this regard, the Guardian’s alteration of “slavishly”to “consistently” maintained the overall meaning of the sentence, while reducing (but not entirely removing) the potential antisemitic sting.

Deborah Orr: “lives of the chosen”

In October 2011, Israel exchanged over 1,000 Palestinian prisoners in return for a soldier, Gilad Shalit, who had been held captive in Gaza for five years.Guardian columnist Deborah Orr sparked outrage when she used the phrase “the chosen” in an article about the exchange:  “…there is something abject in their [Hamas’]eagerness to accept a transfer that tacitly acknowledges what so many Zionists believe –that the lives of the chosen are of hugely greater consequence than those of their unfortunate neighbours.”

Writing in the Jewish Chronicle, commentator David Aaranovitch explained his (and others’) concerns with Orr’s use of “the chosen…when the predicted complaint [about the Shalit exchange terms] was made in the predictable place (the Guardian’s opinion columns), the source surprised me. Deborah Orr is a clever, sensitive writer, as little given to bombast or prejudice as any columnist.“…What was so shocking to me about this phrase was its casualness – not its deliberation. The writer just didn’t realise, it seemed, that this charge about ‘chosenness’ – as applied specifically and categorically to Jews (whether ‘Zionists’ or not) is one of the most recurrent and poisonous tropes in antisemitism… Had she been confronted with the suggestion that, say, blacks were a bit childlike,undisciplined, sensual and physical rather than intellectual, she’d have recognised immediately the contours of old-time racism. The alarms would have gone off, the thought would have been interrogated, the problem noticed.“…Orr’s reaction seems to come from a place that deems all Zionism – all belief in a Jewish homeland– to be beyond respectability.“…What worries me here, as it increasingly has done for a decade, is the way in which the Palestinian issue is leading to a slippage in sensibilities, from concern, to partisanship, to an almost unconscious acceptance of the characterisation of Jews or Zionists or Israelis which replicates ancient libels….”

Controversies concerning alleged antisemitism from Islamist sources were typified by the 2011–12 visit to Britain of Sheikh Raed Salah, a leader of the Islamic Movement in Israel. In particular, the Guardian newspaper was highly partial in its reporting of the case. Some coverage of the case (including, in part, by the Guardian) asserted or assumed that the Salah controversy had been engineered by the Israeli Government and carried out, at its behest, by its ‘local’ supporters and forced, somehow, upon the Home Secretary. These allegations about Israeli Government involvement were both unreferenced and untrue.

The case exemplified the manner in which UK Islamists and pro-Palestinian activists defend their political allies from accusations of antisemitism. It is normal for such groups to act in this way and for them to misrepresent British Jewish concerns; but Blood libel allegation CST argued that Salah’s presence was unwelcome, primarily because of a speech he had made in Jerusalem in 2007 that had alluded to the “blood libel”, the notorious medieval charge that Jews kill Christian children in order to use their blood for religious practices.

As the controversy developed, Salah and his supporters claimed that Israeli officials had brought no charges against the speech, then said charges had been brought but dropped due to lack of evidence, before admitting that the case remained outstanding in Israel, but Salah and his supporters now claimed he had been discussing the Spanish Inquisition, not the behaviour of Jews.The final hearing (which Salah won) agreed with CST’s interpretation of the speech.

In February 2012, Justice Ockelton ruled in Salah’s favour against deportation, despite Section 59 of his own ruling finding that Sheikh Salah (“the appellant”) had indeed referred to the blood libel and that the Home Secretary had been right to consider this.  This finding has never been acknowledged…in any Guardian articles.”

“In our judgment this [Salah’s counterargument] is all wholly unpersuasive. The appellant is clearly aware of the blood libel against Jews…The truth of the matter is that the conjunction of the concepts of ‘children’s blood’ and ‘holy bread’is bound to be seen as a reference to the blood libel unless it is immediately and comprehensively explained to be something else altogether.”.

“We have taken into account that the same sermon contained more moderate language and concepts and positive references to Jewish prophets and synagogues. Nevertheless we do not find this comment [by Salah] could be taken to be anything other than a reference to the blood libel against Jews…”

Throughout the controversy, the Guardian…reported the views of Salah’s UK Islamist hosts and defenders, but failed to adequately ask for, report, or consider, the concerns of CST and the UK Jewish community.  It ran no articles countering Salah’s position.

On 29 June 2011, the Guardian ran an article by Haneen Zoabi, entitled, “An Israeli trap for Britain”.This framed the Salah controversy as being an Israeli ploy, carried out by its “supporters abroad”. It essentially reduced the allegations against Salah to the status of lies, concocted by Israel and its British supporters to defend racism and then forced upon the Home Secretary. Excerpts included: “…Unable to produce any legal evidence, the Israeli establishment and its supporters in Britain accuse him of antisemitism….It appears that the charge of antisemitism is being used as a way of suppressing criticism of Israeli policies…it seems that the British government has bowed to pro-Israel pressure even when it comes to inshore affairs.

Next, Zoabi alluded to Zionists being responsible for Islamophobia, repeated her dismissal of the allegations against Salah and ended by implying that “Zionist racism” and “the pro-Israeli lobby”were controlling UK policy: “Pro-Israel organisations in Britain and elsewhere are manipulating growing European Islamophobia to discredit us by falsely portraying the democratic Palestinian struggle against racism and discrimination in Israel as antisemitic.“…The British authorities have fallen into an Israeli trap…until now, Palestinian citizens of Israel have been struggling for our political rights in our country, and confronting Zionist racism inside Israel. But now it seems we have to confront Zionist racism abroad as well.“The pro-Israeli lobby must not be allowed to determine politics in Britain…”

On 1 July 2011, the Guardian ran an editorial in support of Salah. Its title, “Muslim Brotherhood activists: unwelcome guests?” signaled the newspaper’s failure to properly address the antisemitism allegations against Salah, or what this meant for British Jews, Muslim-Jewish communal relations and the Government’s recently tightened anti-extremism guidelines.

The editorial echoed Haneen Zoabi’s opinion piece by crassly suggesting that the UK Government was moving against “all Palestinian activists Israel has a problem with”, before appearing to accept Salah’s denials at face value: “…he says [the allegations] were fabricated, and for which he has started libel proceedings…Mr Salah has not been convicted of antisemitism”.

Additional coverage of Salah by the Guardian.

On 26 September 2011, the Guardian reported upon Salah’s forthcoming appeal. The story summarised the antisemitism allegations against Salah and ran his lawyer’s rebuttals of them. This included implying that CST had “doctored”the Koranic poem and the “blood libel” speech to include mentions of “Jews”.

Following CST’s intervention, the story was altered on the Guardian website, clarifying that these were the lawyer’s claims, not the Guardian’s, and stating:“there is no suggestion that CST doctored the quotes”.  A line suggesting CST had not checked the quotes for accuracy was removed; but a further clarification that CST had actually found and supplied the accurate versions of the poem and speech was not included.

On 30 September 2011, the Guardian reported that Salah had won compensation for two days of wrongful immigration detention.

On 26 October 2011, Salah lost his first appeal. Despite its extensive prior coverage (at least articles prior to this date), this verdict did not appear to be reported by the Guardian. Indeed, the paper seems to have made no further mention of Salah until 9 April 2012, when he won a further appeal. This was covered at length by the  two articles, which implied that Salah had won on all charges, whilst making no mention of the ruling dismissing Salah’s denial of having made a blood libel speech.

It also ran an article by Salah himself, entitled, “Britain’s duty to the Palestinian people”.

CST’s 2011 Report on Antisemitic Discourse clearly demonstrates the Guardian’s continuing antisemitic sins of ‘commission and, just as dangerous, ‘omission’: their silence in the face of clear evidence of antisemitism when covering a story.

While this blog’s mission is clear, and we’ll continue combating antisemitism and the assault on Israel’s legitimacy at the Guardian and ‘Comment is Free’, we also have a related mission: to name and shame the Guardian as an institution which fancies itself the “world’s leading liberal voice” yet continues to display tolerance towards decidedly illiberal opinions about Jews.

It is incumbent upon all those who consider themselves passionate anti-racists to join us in this fight.