Despite the constraints of its famously “smaller operation at the weekend when fewer stories are covered“, BBC News managed to devote considerable effort on Saturday, January 11th to the promotion of the story of the deportation of anti-Israel activist Gary Spedding from Ben Gurion airport the previous day.

The story was included in BBC national news bulletins on that morning as well as being featured in a televised filmed report and a written report – both of which appeared on the BBC News website’s Northern Ireland page – and on BBC Radio Ulster. It was also promoted on BBC Newsline’s Facebook account and by BBC Northern Ireland’s Kevin Sharkey on his own Twitter feed.

The synopsis to the filmed report by Sharkey reads:

“A member of the Alliance Party’s youth wing has said he has been deported from Israel because of his support for Palestinian rights on social media.”

The same claim – according to which Spedding was refused entry to Israel because of his Twitter postings and was banned from Israel for ten years –also features prominently in all versions of the written report, which was amended no fewer than four times after its initial publication. Only in the report’s fifth and final version are readers informed of the fact that:

“The Israeli embassy in London said Mr Spedding was denied entry into Israel because he “organised a violent protest” in Belfast.”

Right down at the bottom of the article the following information appears:

“A spokesman for the Israeli embassy in London said: “Mr Spedding’s entry into Israel was denied due to his involvement in organising a violent protest in Queens University, Belfast, in which an Israeli representative was attacked, and others were forced to take shelter to prevent being hurt.

“No country has an obligation to allow foreigners who have been involved in violent activities targeting its nationals to enter its territory.” “

Notably, the BBC elected not to provide readers with further information about that 2011 event involving the Queen’s University ‘Palestine Solidarity Society’ which was founded by Spedding in 2010 and which he chaired at the time.

“Solon Solomon, a former legal adviser to the Knesset Foreign Affairs committee, had been invited to speak to law school students at Queen’s University in Belfast.

But he was heckled by members of the university’s Palestine Solidarity Society (PSS) and the youth wing of Sinn Féin shortly after starting his lecture about the legality of Israel’s security wall on Wednesday last week.

Sally Wheeler, the law school acting head, abandoned the lunchtime session after less than 10 minutes, and a security team bundled Mr Solomon out of the lecture theatre.

Protesters then surrounded the room where Mr Solomon and other panel members were sheltering.

When the security team eventually moved him out of the university building, protesters attacked the car he was travelling in, punching the vehicle and attempting to smash its windows.”

Via the Jewish Chronicle we learn that the embassy statement included another relevant item of information ignored by the BBC:

“Contrary to Mr Spedding’s claims, the embassy said a 10-year-ban had not been imposed, but that future visits would have to be co-ordinated through the London embassy.” 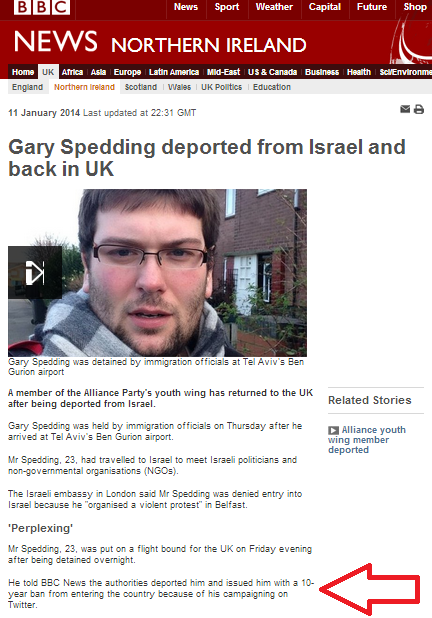 In other words, claims made in both the filmed BBC report and all versions of the written article with regard to a “10-year ban from entering the country because of his campaigning on the social media site, Twitter” are inaccurate.

Despite that fact, no notification advising audiences to that effect appears on the webpage displaying the filmed report or is attached to the written report.

Obviously, it is highly unlikely that BBC audience members who had heard news bulletins, viewed the filmed report on television or read the earlier drafts of the written report on Saturday morning would have bothered to re-read the last version of that article some 21 hours after it was first published – meaning that they will be unaware that the information they were given is inaccurate.

Hence, self-proclaimed Middle East ‘expert’ and apparent political hopeful Gary Spedding has – with no small amount of help from the BBC – milked to the full the exposure and one-sided publicity he (and apparently his party) desired from this story.

The fact that the BBC is bound to standards of accuracy and that these reports do not meet those standards is clear. Whether or not it is the BBC’s role to allow itself to be used to advance the propaganda and public relations campaigns of activists-cum-aspiring-politicians is of course another (no less interesting) issue for discussion.