On Monday, Israeli and Palestinian negotiators agreed to extend a temporary ceasefire in Gaza by 24 hours so they could continue to conduct more talks on a long-term truce. The five-day ceasefire was set to expire at midnight Israeli time.
On Tuesday, at roughly 15:45 Israeli time (less than 16 hours into the 24 hour extension), terrorists in Gaza violated the ceasefire when they fired three rockets at Israel, causing large explosions near Beersheva. (This represents the eleventh cease-fire that Hamas either violated or rejected since the war began.)
Forty-five minutes later, at 16:30, there were reports of further Gaza rocket attacks on Ashdod and Ashkelon.
At 16:34, the IDF began retaliating in response to the Palestinian rocket barrage.
The timeline is not in dispute, as US officials made clear last night.
However, here’s the Guardian misinformation that we were all anticipating:
Print edition headline and strap line: 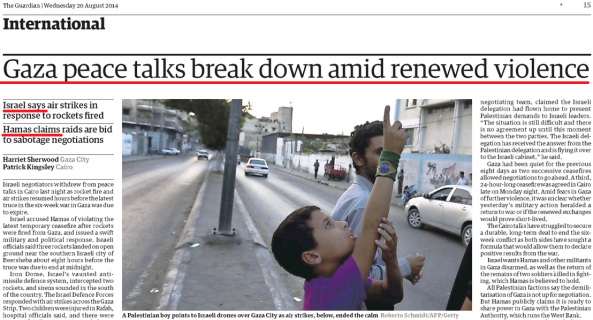 Here are the relevant opening passages:

Israeli negotiators withdrew from peace talks in Cairo aimed at forging a durable ceasefire in the six-week war in Gaza on Tuesday night as rocket fire and air strikes resumed hours before the latest truce was due to expire.
Israel accused Hamas of violating the latest of a series of temporary ceasefires after rockets were launched from Gaza, triggering a swift military and political response
…
Israeli officials said 10 rockets were fired from Gaza, the first of which were launched about eight hours before the truce was due to end at midnight

Then, we learn what the head of the Palestinian negotiating team claimed:

Palestinian negotiators blamed the collapse of the Gaza ceasefire on Israel’s failure to take Cairo-based negotiations seriously. Azzam al-Ahmad, the head of the Palestinian delegation, claimed that Israel had always intended to break the truce, and had used the firing of three rockets from Gaza on Tuesday afternoon as an excuse for an already-made decision to sabotage the talks.

So, according to Al-Ahmad, Hamas may have technically violated the ceasefire, but the rocket attacks from Gaza were cynically exploited by Israel, who had already made the decision to “sabotage the talks”.
Then, we learn what Hamas spokesman Sami Abu Zuhri claimed about the ceasefire.

The Hamas spokesman in Gaza, Sami Abu Zuhri, denied knowledge of the rocket fire which Israel said had breached the truce. “We don’t have any information about firing rockets from Gaza. The Israeli raids are intended to sabotage the negotiations in Cairo,” he told reporters.