Sky News reporter Adam Boulton asked Britain’s Chief Rabbi Ephraim Mirvis three separate times if Israel causes antisemitism, during a short interview conducted on International Holocaust Memorial Day.  As Boulton was interviewing Mirvis about the significance of the 70th anniversary of the liberation of Auschwitz, viewers saw video in the background of Palestinians in the rubble of Gaza during the summer war, under the headline: “Auschwitz remembered”.
Here’s a screenshot from a YouTube clip of part of the interview: 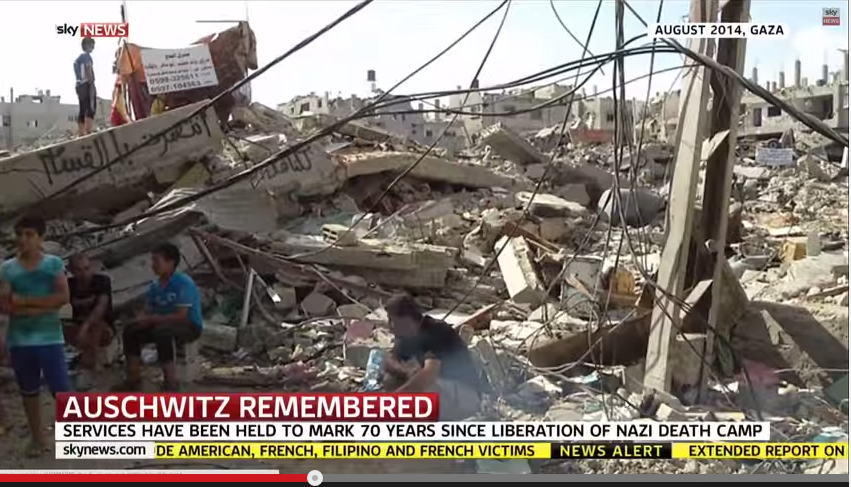 [youtube https://www.youtube.com/watch?v=1yztmTFAgPo]
First, in case it needs reminding, “holding Jews collectively responsible for actions of the state of Israel” represents a classic example of modern antisemitism.
Additionally, as Chief Rabbi Mirvis attempted to point out, the Sky News reporter got it completely backwards. It is the extreme antisemitic ideology of Hamas – whose charter calls for the murder of Jews – which continues to fuel the continued violence.
More broadly, Israel doesn’t cause antisemitism.
Rather, Israel serves as an alibi by anti-Semites to deflect the charge that they are racist towards Jews.
Israel’s re-establishment as a home for Jews, after thousands of years of statelessness, was a direct response to the persistent antisemitism which ultimately led to the death camps of Sobibor, Treblinka and Auschwitz – the same racism which now “fuels” jihadist attacks against Jews in Paris, Brussels and Jerusalem.
On the 70th anniversary of the liberation of Auschwitz, it’s extremely dispiriting that well-educated, putatively ‘cultured’ Britons would legitimize the antisemitic logic which implicitly holds Jews responsible for their own victimization.
h/t Melanie

Like Loading...
Tags from the story
Anti-Zionism, Antisemitism, Auschwitz concentration camp, British Jews, Europe, Jews, Paris, Sky News
Written By
Adam Levick
More from Adam Levick
Such holiday trickery reminds us that though events in the region may...
Read More