Guardian columnist Giles Fraser was born Jewish (the family name was originally Friedburg) but later converted to Christianity and became an Anglican priest.  Though he sometimes speaks of his fondness for the British Jewish community, his columns at the Guardian leave no doubt regarding his hostility to the Zionist passions of the overwhelming majority of actual Jews.  Similarly, though he claims to still believe in ‘the idea of Israel’, you’d be hard pressed to find more than a few actual citizens of the state who he regards as ‘righteous’.  In this last regard, Fraser actually praised Haaretz columnist Gideon Levy as a courageous voice, among the few genuinely moral Israeli Jews.

Additionally, Rev. Fraser (in analyzing Israel’s unique pathos) once compared the state to an autistic child, and has – on more than one occasion – appeared to express sympathy for Palestinian terrorism.

So, given such a record, it certainly wasn’t surprising to come across the following tweet by Fraser on May 25:

Up till nowI have avoided the word apartheid in describing occupation of West Bank. Hebron today changed my mind. pic.twitter.com/7hwVlXtJmK

Regarding the charge of “apartheid” in Hebron, a brief history is in order.

Hebron’s Jewish community, which currently includes some “90 families and 200-350 yeshiva students”, is perhaps the oldest Jewish community in the world (dating back to Biblical times) and is designated as the second holiest city in Judaism. It contains the Tomb of the Patriarchs – the second holiest site for the Jewish people after The Temple Mount

Jews have lived in Hebron almost continuously throughout the Byzantine, Arab, Mameluke, and Ottoman periods, and it was only in 1929 — as a result of an Arab pogrom in which 67 Jews were murdered — that the city became temporarily free of Jews. 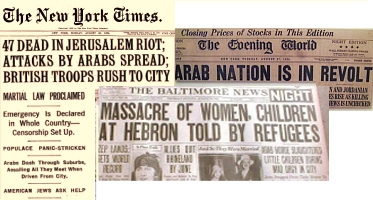 Under Jordanian control from 1949 to 1967, Jews were not only forbidden from living in Hebron but were barred from entering the Tomb of the Patriarchs, while authorities undertook a systematic campaign to obliterate any evidence of Jewish history in the ancient city.  They reportedly “razed the Jewish Quarter, desecrated the Jewish cemetery and built an animal pen on the ruins of the Avraham Avinu synagogue”.

Shortly following Israel’s victory in the 1967 Six-Day War, the Jewish community of Hebron was re-established. Whilst Hebron is of course positioned on the ‘other side’ of the 1949 armistice lines (the green line), characterizing Jews who currently live in Hebron as “settlers” falsely suggests that they are interlopers, colonizing land with which they have no connection.

In January 1997, the IDF withdrew from 80 percent of the city. Today – consistent with the terms of the Hebron Agreement signed by the Palestinian Authority – the city is composed of  two separate sections – H1 and H2.  H1 is Palestinian (population apx. 120,000), while the city’s entire Jewish population resides in H2 (a geographical unit which is also home to 30,000 Palestinians). H1 is similar in many respects with the Area A designation in the greater West Bank, with Palestinian security forces maintaining control of that section of the city. The IDF maintains a military presence in H2 (20 percent of the city’s territory).

Contrary to Fraser’s specific accusation, the separation between Jews (Israeli citizens) and Palestinians (not Israeli citizens) is dictated by the desire to protect both sides from violence.

The word “apartheid” in characterizing Israel (a smear originating in ‘anti-Zionist’ campaigns waged by the Soviets during the Cold War) is not an intellectually serious charge, but an emotive term meant to incite hatred against the state by comparing it morally to the odious system of racial exclusion and supremacy which reigned in South Africa from 1948 to the early 1990s.

The current security arrangement – again, agreed upon by the Palestinian Authority – is in place in lieu of a final status agreement. Though far from perfect, the current scheme is much better than the alternatives – either eliminating current security measures which keep Palestinian and Jewish extremists from engaging in deadly attacks, or ridding the city of Jews entirely.  Whilst Fraser would likely not be supportive of the former idea, it wouldn’t be at all surprising if he fancied the latter.

After all, for those of the opinion that Jews living in Judea and Samaria (beyond 1949 armistice lines) are legally and ethically illegitimate, then the expulsion of every last remaining Jew from ancient Jewish cities (such as Hebron) becomes a moral imperative.