Just over a year ago the BBC came under criticism following its decision to promote a press conference concerning the ISIS terrorist known as ‘Jihadi John’ which was held by the organization ‘Cage’. The day after its extensive coverage of that event, the BBC News website published an additional article titled “Cage: Important human rights group or apologists for terror?“. The article of course did not answer the question posed in its title but it did steer readers towards the former view. 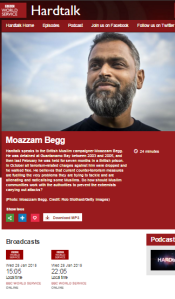 Since then – and despite that question having been asked – representatives of ‘Cage’ have continued to appear on BBC programmes (for example here, here and here) but still without adequate presentation of the organisation’s agenda and ideology as editorial guidelines on impartiality demand. That of course is significant because it means that audiences are deprived of the ability to put the commentary coming from ‘Cage’ – including, for example, on the topic of the UK’s counter terrorism strategies – into its appropriate context through understanding of the “particular viewpoint” behind it.

The CST recently published an article which includes some insight into those ideologies and is well worth the read – not only in order to find out who ‘Cage’ promoted at its 2015 Iftar dinner.