Last month we noted that the term of the current UN Human Rights Council’s ‘Special Rapporteur on the situation of human rights in the Palestinian territories occupied since 1967’, Michael Lynk, was approaching its end:

WILL THE BBC AGAIN AVOID THE ISSUE OF A CONTROVERSIAL UNHRC SPECIAL RAPPORTEUR?

Lynk’s parting shot is a report in which he jumps on the ‘apartheid’ smear bandwagon previously employed by political NGOs including ‘B’tselem’, ‘Human Rights Watch’ and ‘Amnesty International’, with uncritical amplification provided by the BBC (see ‘related articles’ below). 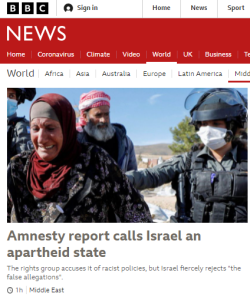 “The report is authored by the UN’s Special Rapporteur “on the situation of human rights in the Palestinian Territory occupied since 1967,” Michael Lynk. In his report, an advance unedited version of which was made public on March 22, Lynk accuses the Jewish state of being a “covetous alien” entity.

Having thus started off with the tired antisemitic trope of the “covetous” Jew, Lynk goes on to spread numerous false claims using the megaphone handed to him by the United Nations.

In alleging Israel is now an “apartheid” state, Lynk begins his report with the statement that “When the facts change, so must our minds.” Yet an honest and critical reading of the content of his report elucidates that the facts haven’t changed, notwithstanding Lynk’s repeated lies. Instead, the special rapporteur is trying to change the law to fit the falsified “facts” he presents.”

The context of the report from Lynk is explained as follows:

“…Lynk’s report was anticipated as part of the ongoing and coordinated assault on Israel’s right to exist being carried out by both UN figures and “human rights” organizations like Amnesty International and Human Rights Watch. These series of reports work to build up momentum for the anti-Israel slander ahead of the UN’s Commission of Inquiry’s report due in June, which is also expected to accuse Israel of “apartheid” and rewrite history to question Israel’s legitimacy.”

CAMERA has more on that topic:

“Like his previous writings, Lynk’s paper is characterized by emotive language, designed to portray Israel as greedy and cartoonishly wicked.  The reader is told that Israeli measures to prevent the smuggling of weapons and military materiel into Gaza constitute a “medieval military blockade,” and that Israel is a “covetous alien power” that must “abandon the fever-dream of settler-colonialism and recognize the freedom of the indigenous people.””

False Knowledge as Power: Deconstructing Definitions of Apartheid that Delegitimise the Jewish State

Neo-Orientalism: Deconstructing claims of apartheid in the Palestinian-Israeli conflict