When some real demonstrations by Palestinian protesters take place, the BBC's reporting on that topic is nowhere to be found. 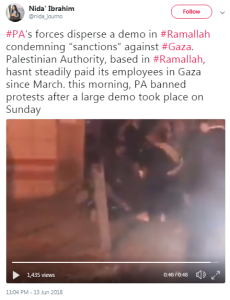 “Palestinian Authority Security Forces broke up protests in Ramallah on Wednesday night, after a week of rare public displays of opposition to the Palestinian leadership. Demonstrators called for an end to sanctions on the Gaza Strip, blaming PA President Mahmoud Abbas and the PA for its role in isolating the Hamas-run enclave.

PA Security Forces – which include numerous layers of police, plainclothes officers, riot police and more heavily armed units – sought to prevent a mass protest by Palestinians in central Ramallah. They erected “flying checkpoints” at entrances to Ramallah, according to tweets by activist Mariam Barghouti. A group of predominantly young men and women chanted “Freedom, freedom,” as police used stun grenades and physical force to remove them, Barghouti wrote. “Downtown Ramallah is like a war zone. All we’re asking is stop punishing our people by our leadership.””

The PA security forces were criticised by an NGO and by local and international press freedom organisations.

“The Palestinian Center for Development and Media Freedoms (MADA) expresses its deep concern and condemnation of the Palestinian security services’ repression and widespread attacks on journalists and the media outlets and preventing them from covering the peaceful assembly that was organized in Ramallah to demand lifting all  sanctions imposed on Gaza Strip, MADA denounces these violations that targeted civilians including journalists who peacefully participated in the demonstration; such rights are guaranteed under the Palestinian Basic Law.”

Several days later, on June 18th, a demonstration in the Gaza Strip was also violently dispersed by security forces – this time those controlled by Hamas.

“Undercover Hamas operatives attacked Palestinian protesters on Monday during a march held in Saraya Square in the center of Gaza City.

The demonstration was part of the Prisoners Movement’s initiative to end the division between Hamas, the armed Islamic group that rules the Gaza Strip, and Fatah, the political party that dominates the Palestinian Authority in the West Bank. […]

…Hamas members with long beards showed up,” a protester claimed to The Media Line. She added that most of them, armed with weapons, started pushing the protesters, including the females, assaulting them with rocks, sticks, and shoes.

“They kept pushing until they destroyed the whole stage and equipment,” the protester revealed. She said that the situation deteriorated when the armed assailants stopped protesters from filming the developments by stealing their phones. “I filmed part of the clashes and escaped by a car,” the protester told The Media Line, however, she qualified, Hamas members stopped her vehicle and forced her to delete videos and pictures. They purportedly threatened her, saying, “we will get back to you, just wait for us.””

For nearly three months the BBC has been reporting on what it has euphemistically portrayed as “demonstrations” along the border between the Gaza Strip and Israel. Despite the fact that people approaching that border – many of whom were linked to terror groups – have carried out shooting, firebomb, IED and arson attacks and have damaged the fence and tried to infiltrate Israeli territory, the BBC has insisted on blandly describing them as “protesters”

However, when some real demonstrations by Palestinian protesters take place, the BBC’s reporting on that topic is nowhere to be found.