Why did the BBC - unlike other media organisations - avoid any mention of the words Hizballah and Amal?

Here is how the BBC described what happened in Lebanon the previous day: 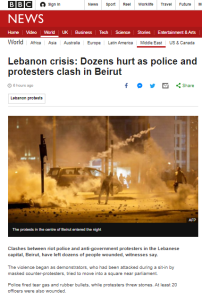 “Clashes between riot police and anti-government protesters in the Lebanese capital, Beirut, have left dozens of people wounded, witnesses say.

The violence began as demonstrators, who had been attacked during a sit-in by masked counter-protesters, tried to move into a square near parliament.

Here is how AP reported the same story (along with the Guardian):

“The trouble started Saturday when dozens of men, some wearing masks, threw stones and firecrackers at security forces on one edge of the protest camp in central Beirut. They were supporters of the Shiite Hezbollah and Amal groups, angered by some of the criticism of their leaders by anti-government protesters.

It was the second time this week the groups tried to attack the protest camp.”

Security forces intervened, firing teargas to disperse the men who attacked the camp with stones and firecrackers. […]

Shiite Amal and Hezbollah are partners in Lebanon’s cross-sectarian government, and supporters of Hezbollah and Amal have attacked anti-government protest camps in several cities in recent weeks, angered by demonstrators’ criticism of their leaders.”

The Times of Israel’s report states:

“The violence Saturday started when young men from a neighborhood known as a stronghold for supporters of the Shiite Amal and Hezbollah groups attacked the epicenter of anti-government protests, chanting “Shiite, Shiite.”

It was the second time this week that pro-Hezbollah and Amal supporters tried to attack the protest camp, angered by demonstrators’ criticism of their leaders.”

So while other media outlets were perfectly capable of informing their readers to which factions those “masked counter-protesters” belonged and what part they played in instigating the violence in Beirut, the BBC carefully avoided any mention of the words Hizballah and Amal – thereby concealing an important part of the story from its audiences and from its permanent public record.

BBC’s ME editor ‘joins the dots’ but dodges issues