If we were to conceive of the Private Eye article as a person, we'd be forced to say that he didn't have a honest bone in his body.

Here’s an article published in the Jan. 9th print edition of the British magazine Private Eye: 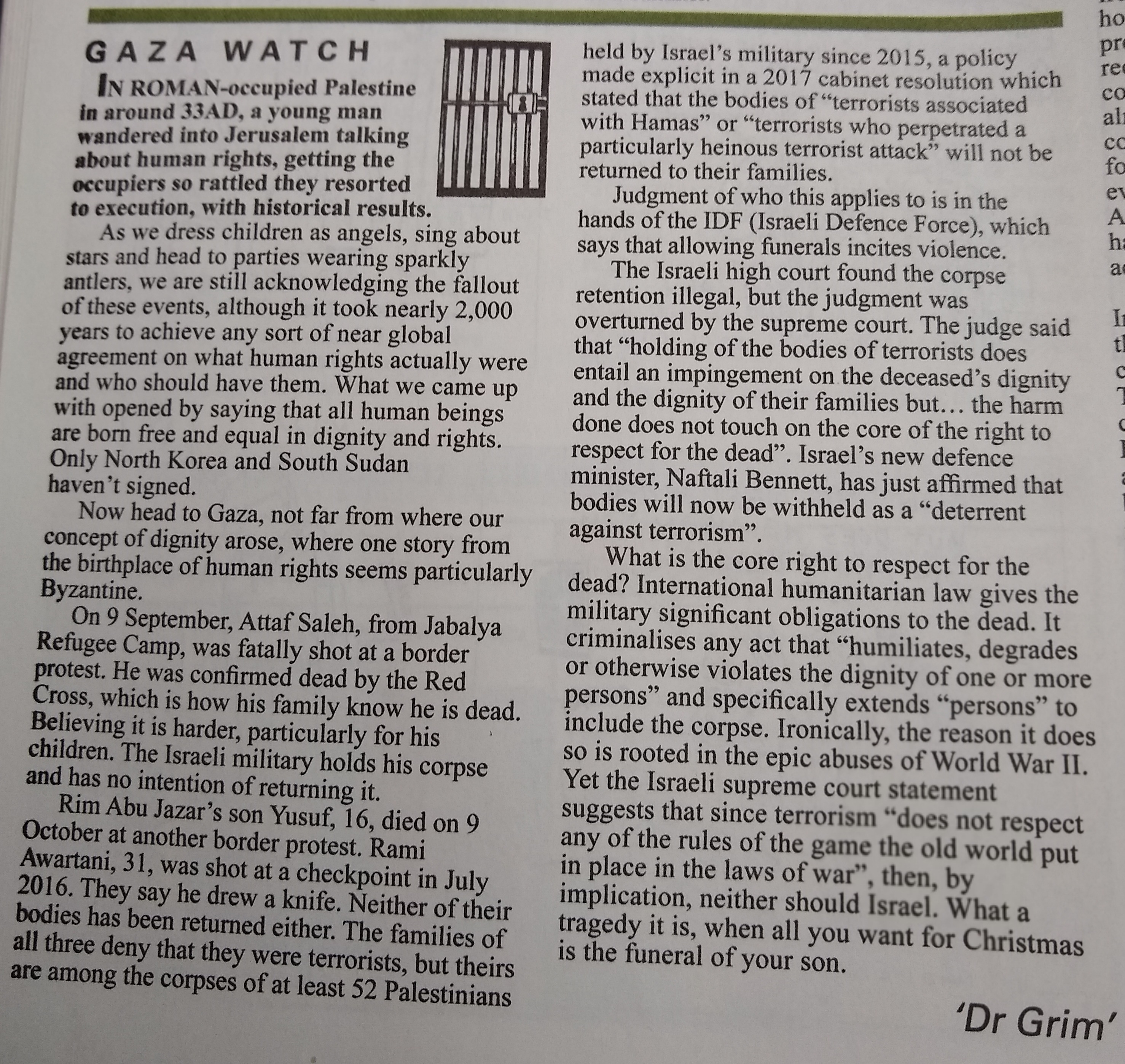 The reference to the execution of Jesus Christ by Roman “occupiers” has a clear editorial objective: to evoke a moral and historical comparison between the persecution of Christ and the persecution of Palestinians.  Though not going as far as some anti-Israel activists do in explicitly framing Christ, a Jew from Judea, as ‘Palestinian’, readers would likely come away with the idea that, just as Christ, 2000 years ago in ‘Palestine’, was oppressed and killed for advocating on behalf of “human rights”, Israelis today are committing similar crimes against (putatively ‘human rights seeking’) Palestinians in the Hamas ruled enclave.

To Private Eye, the Jewish state, unique among the family of nations, is failing to uphold basic norms of human rights and dignity that it “took 2000 years” to achieve.

The logic is warped in so many ways, the least of which its absence of any mention of the human rights abuses of Hamas, a proscribed terror group whose leaders openly call for the mass murder of Jews, fire rockets at civilian populations, persecute and murder gays, and arrest and torture political opponents.

Moreover, note how the writer evokes Christ, Christianity and Christmas, yet ignores the Islamist regime’s oppression of Christians in the Strip, the numbers of whom have decreased dramatically since they took control of the territory.  Their suggestion, in the last line of the article, that families of Palestinian Muslims killed during border riots, many of whom were supporters of Islamist extremist terror groups such as Hamas, want anything “for Christmas” may cynically serve its rhetorical ends, but is dishonest to the point of journalistic malice.

It’s of course also telling that the writer professes anger for those who violate the dignity of the dead, yet doesn’t mention the that Hamas refuses to return the bodies of Hadar Goldin and Oron Shaul, Israeli soldiers who were killed in Gaza in 2014 – in clear breach of international law. Let’s also recall that, in 2012, Gaza gunmen were filmed on motorcycles dragged the body of a Palestinian man who was killed as a suspected collaborator with Israel.

Dignity for the dead, or respect for their surviving family members, clearly isn’t a priority for Hamas, and certainly is not an issue likely to be debated by their ‘courts’.

Elsewhere in the article, Private Eye seems skeptical that Rami Awartani was actually a terrorist, writing that he was shot and killed after the IDF “claims” he drew a knife.

However, Hamas in Nablus issued a death notice (below) after he was killed, describing him as a “heroic shaheed son“, thus admitting he was a member.  The death notice, per a translation by CAMERA’s Arabic researchers, goes on to say: “Rami al-‘Awartani, who became a martyr…as the Occupation opened fire towards him after his attempt to commit a stabbing attack near the Hawar checkpoint south of Nablus”. 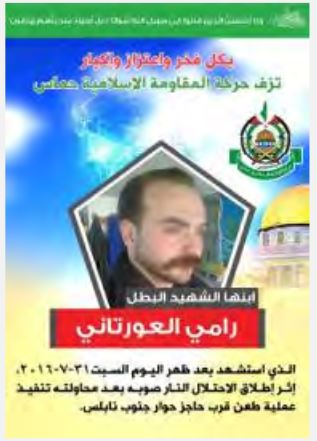 In short, if we were to conceive of the Private Eye article as a person, we’d be justified in saying that he doesn’t have a honest bone in his body.