The Egyptian television series An-Nehaya (“The End”), which debuted at the beginning of Ramadan (April 24th) as the Arab world’s ‘first sci-fi series’, takes place in a future Middle East in 2120. Starring prominent actor Yousuf Al-Sharif, the series predicts the fate of the State of Israel in the century to come (translation by MEMRI):

“[A history teacher speaks to young children:] In the first half of the 21st century, the balance of power in the world started to change. All the countries of Northern America used to be united in what was called ‘the United States of America.’ Then they began to weaken, fall apart, and fight one another. What used to be known as the Arab countries grew more powerful economically and militarily. The United States of America had been the main backer of the Zionist state. When the Arab countries got the chance to get rid of their sworn enemy, they launched the war that was called ‘The Jerusalem Liberation War.’

“The war was quickly over and the Zionist state of Israel was destroyed before 100 years had passed since its establishment. The vast majority of Jews in Israel fled back to their original countries in Europe and various countries of the world…”

The views of the director, Yasser Sami, do not appear to diverge much from the show’s portrayal of Israel’s demise. After the Israeli foreign ministry commented on the TV show, Sami responded:

“The Zionist entity should wait until 2120, for its absence as depicted in the series to come true, before opposing it. The series tells the story of an Arab dream that we believe in and also dream about. Palestine is an occupied Arab and Muslim land and the production staff and I expressed this in our [motion] picture; however it seems that the image we created was truthful, so it bothered them.” 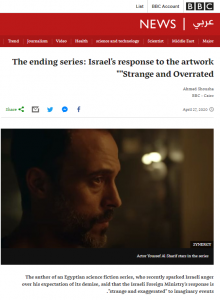 In an article about that Egyptian TV series published on the BBC Arabic website on April 27th, the writer chose to embed the following two Twitter comments:

“First day that I started watching An-Nehaya and for me it was very intelligible and good. What caught much of my attention, though, was that it has the Jerusalem Liberation War and the collapse of the Zionist entity, and that the Arab States will live together in the Levant. Here and now we say, Kudos Yousuf Al-Sharif  ” (SHANDA_KH “Unicorn”, Egypt)

“#An_Nehaya is a series of global impact, we woke up and came across Israel as it objects the series’ events when it deals with the termination of the usurper entity after 100 years. One silent message from Yousuf Al-Sharif that all the governments fell short of [uttering]. I applaud you with all my heart, Yousuf” (Mohamaed Kareem, Egypt)

BBC Arabic chose to amplify both those Tweets despite their hateful nature and their promotion of the view that demise of the “Zionist entity” by the means of a war initiated by its Arab neighbours and the mass displacement of a sovereign people is a key part of a brighter future for the Arab world.

A similar approach was taken by BBC Arabic in relation to comments concerning another Ramadan series – “Um Haroun”, starring Kuwaiti actress Hayat al-Fahd. The series, which was filmed in Bahrain and the UAE and is currently being broadcast by Saudi MBC network, stirred a debate over its positive portrayal of a fictional Jewish community living in one of the Gulf States in the 1940s.

Even prior to the broadcast of the first episode, BBC Arabic had already amplified several bigoted social media comments relating to the show’s promotional video. The comments criticised “Um Haroun” because it features historical Jewish characters as a religious minority encountering hardships. The comments were aired on the network’s social-media-themed programme “BBC Trending”, hosted by Rania Alattar on April 14th: 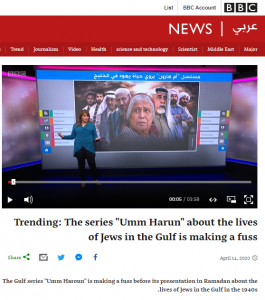 “At this time, selecting a Kuwaiti actress [to play] #Um_Haroun for a television piece where the grievance of Jews in #Kuwait [sic] is presented, is one of the forms of normalisation with #The_Zionist_entity which is [to be] outright rejected” (M. Hussein al-Fadli, Kuwait)

“A series that revolves around co-existing with the Jews in the Gulf… While thousands of Gulf women who performed heroic acts in various areas exist, and with plenty of true stories [featuring] Kuwaiti heroines throughout the invasion [by Iraq in 1990-1991], the role of a Jew is being portrayed so that she would become the heroine” (Hanan al-Qattan, Kuwait)

“What are the objectives gained from a series that tells the story of a Jew as she faces suffering in the Gulf? Does Israel broadcast shows about the story of a Muslim in its prisons, of a house it demolished around its owners’ ears to benefit its settlements, or about the story of thousands of Palestinian families whose bodies were ripped apart by its airplanes? (Fahd, Kuwait)

Two weeks later, when “Um Haroun” went on air, the BBC Arabic website showcased yet another cluster of social media comments, including the following tweet from the British-Palestinian journalist ‘Abdel Bari ‘Atwan who has a long record of supporting violence and antisemitism: 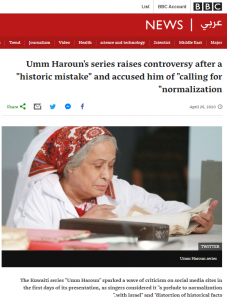 “The ‘Um Haroun’ series is one of the most dangerous episodes in the [sequence] of normalising and legitimising the return of Jews to the Arabian peninsula, and Khaybar in particular, and whoever says otherwise does not know history”

‘Atwan’s tweet was uncritically presented as though it were a legitimate part of an online conversation about the series’ perceived link to contemporary politics.

Section 5.3.38 of the BBC editorial guidelines on Harm and Offence states:

“We must ensure that material which contains abusive or derogatory treatment of individuals, groups, religions or communities, is not included in our output unless it is justified by the context.

Under Ofcom’s Broadcasting Code, material may constitute hate speech if it is likely to encourage criminal activity or lead to disorder. It includes all forms of expression which spread, incite, promote or justify hatred based on intolerance on the grounds of disability, ethnicity, gender, gender reassignment, nationality, race, religion or sexual orientation.

Content producers may include contributions from people or organisations with extreme or challenging views. Where output includes views which might incite hatred we must have editorial justification and must include appropriate challenge and/or other context.” [emphasis added]

The two Egyptian comments shown above express joy and anticipation at the notion of an Arab military aggression that would annihilate Israel and cause the displacement of millions of its Jewish citizens. ‘Atwan’s comment claims that a television show about a historical Jewish community in the Gulf is a slippery slope which could hasten the immigration of unwanted Jews into places in the Arabian peninsula that have been void of them for almost 14 centuries.

Nevertheless, no effort was made to include relevant context or to challenge the social media comments selected for promotion by BBC Arabic as required by the BBC’s editorial guidelines.

The practice of showcasing social media comments without adherence to the editorial guidelines on ‘Harm and Offence’ is not new. A complaint made to the BBC by CAMERA Arabic concerning a highly offensive social media post which still appears in a BBC Arabic website report has gone unanswered for 10 months.

JEWS OF THE MIDDLE EAST IN THE EYES OF BBC ARABIC