As we previously documented, on June 1st the BBC News website published a report concerning an incident which had taken place two days earlier in the Old City of Jerusalem.

That report remained on the website’s ‘Middle East’ page until June 5th. Two days later on June 7th another report on the same topic was published under the headline “Palestinian autistic man’s killing a ‘tragedy’ says Israeli PM”. 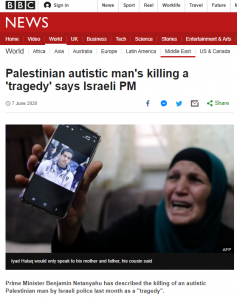 “Prime Minister Benjamin Netanyahu has described the killing of an autistic Palestinian man by Israeli police last month as a “tragedy”. […]

Mr Netanyahu had not commented publicly on the killing until now.

On Sunday he offered his condolences and said he expected a full investigation into the shooting.

“What happened with Iyad Halaq is a tragedy,” Mr Netanyahu said at the start of a cabinet meeting. “This is a man with limitations – autism – who was under suspicion, we know, wrongly, of being a terrorist in a very sensitive location.””

In the next paragraph readers were presented with a link to a Ha’aretz report about Netanyahu’s statement which would be useless to the vast majority of readers because it is behind a paywall. BBC audiences were not provided with the full statement.

“What happened with Iyad Al-Halak is a tragedy. This was a man with disabilities, autism, who was suspected – we know wrongly – of being a terrorist in a very sensitive place. I know that the inquiries are being made. We all share in the family’s sorrow. I think that this embraces the entire Israeli public, as well as the entire Israeli government. I await your full inquiries on this matter. Of course, this does not justify the wild assault on former MK Yehidah [Yehudah] Glick, and I am certain that justice will be done here as well.”

That reference to “your full enquiries” was apparently directed to the Minister of Public Security, Amir Ohana, who – unreported by the BBC – had previously expressed sorrow concerning Iyad Halak’s death.

The final sentence refers to an incident which took place three days before the BBC’s article was published in which the former MK was assaulted while trying to pay a condolence visit to the family.

Apparently that incident was not deemed newsworthy by the BBC and neither was a condolence visit paid by the Jerusalem Chief Rabbi and the city’s deputy mayor.

The BBC’s article presented some of the relevant context which, as we noted at the time, was absent from the previous report.

“In recent years there has been a spate of attacks – many of them deadly – by Palestinians against Israelis in and around the Old City, with assailants shot dead by police in many cases.”

However it also repeated the same redundant linkage and ‘parallels’ seen in the first report.

“Activists have drawn parallels with the killing of George Floyd in the US, which has sparked widespread protests. Social media users have been using the hashtag “Palestinian lives matter” to share their outrage. […]

It comes at a time of rising tensions between Israelis and Palestinians in the wake of Mr Netanyahu’s declared intention to annex parts of the occupied West Bank – something which has been met with outrage by Palestinians.”

Iyad Halak’s death of course has nothing at all to do with the as yet theoretical application of Israeli civilian law to certain parts of Area C and there are no valid “parallels” between that incident and the one in Minneapolis.

Nevertheless, the BBC continues to amplify those who opportunistically exploit of the tragic death of a young man to promote a political agenda. Palestinian lives of course matter but so do Israeli lives and the context to the shooting of Iyad Halak is that- as the BBC well knows – Israelis have been murdered in that part of Jerusalem by Palestinian terrorists.  No such comparable context exists in relation to the incident in the US.