On June 6th the BBC News website posted a report headlined “Iran blocking sites access, UN nuclear watchdog says” on its ‘Middle East’ page. The same story was covered the previous day by news agencies including Reuters and AP and the BBC’s article cites a report from AFP. 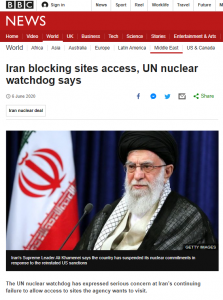 The BBC’s article relates to two separate reports from the IAEA, one of which concerns Iran’s denial of access to the UN organisation’s inspectors to sites suspected of being connected to nuclear activity which predated the 2015 agreement kown as the JCPOA.

BBC audiences were informed that:

“The UN nuclear watchdog has expressed serious concern at Iran’s continuing failure to allow access to sites the agency wants to visit.

The International Atomic Energy Agency (IAEA) says that for more than four months Iran has been blocking inspections of two suspect locations.

It is believed the activity there took place long before Iran agreed to curb its nuclear ambitions in a 2015 deal.”

Not for the first time, the BBC’s framing whitewashes the fact that Iran ratified the Nuclear Non-proliferation Treaty (NPT) in 1970, that the IAEA found Iran to be non-compliant in 2005, that the UN Security Council imposed sanctions on Iran in 2006, passed a related resolution in 2007, another in 2008 and another in 2010. In other words, the BBC’s suggestion that limitations on the Iranian nuclear programme only came into effect after the JCPOA was agreed is inaccurate and misleading.

Despite evidence to the contrary, the BBC once again chose to amplify Iranian talking points

“Iran has always denied that it has ever sought to develop a nuclear weapon, insisting that its programmes have been peaceful.”

In December 2015 the International Atomic Energy Agency produced a report which stated that:

“…the agency “assesses that a range of activities relevant to the development of a nuclear explosive device were conducted in Iran prior to the end of 2003 as a coordinated effort, and some activities took place” up to 2009.”

The BBC knows about that report and subsequent developments and yet it continues to provide uncritical amplification for Iran’s messaging in every relevant article.

Under the sub-heading “What is the Iran nuclear deal?” the BBC’s report states:

“The deal was signed [sic] in 2015 by Iran and China, France, Germany, Russia, the UK and the US. Under the deal, Tehran agreed to curb its nuclear activity in return for the lifting of sanctions.

Although the agreement allowed Iran to accumulate small amounts of uranium for research, it banned the enrichment of uranium, which is used to make reactor fuel but also, potentially, nuclear weapons.

Iran was also required to redesign a heavy-water reactor being built, whose spent fuel would contain plutonium suitable for a bomb, and to allow international inspections.”

The US State Department clarified in November 2015 that the JCPOA was not “signed”.

In contrast to AP’s report, the BBC did not bother to clarify that:

“It [Iran] is also above the pact’s limitations on heavy water.”

The BBC goes on:

“The agreement was hailed as a landmark – but in May 2018, President Donald Trump abandoned the deal, which he criticised as flawed, and reinstated US sanctions.”

The BBC did not bother to inform readers that the context to the US president’s decision was the Iran Nuclear Agreement Review Act – passed in 2015 – which required the US administration to certify to Congress every ninety days that Iran was fully implementing the JCPOA.

As we see the BBC News website continues to amplify Iran’s denials without qualification in its reporting on the Iranian nuclear programme and the JCPOA. Despite reports from the IAEA suggesting that violations of the Nuclear Non-Proliferation Treaty did take place, promotion of Iran’s talking points persists, even though it clearly hinders audience understanding of the issue.