Israeli Border Police on Wednesday released footage from a car-ramming attack in the West Bank, pushing back against accusations that IDF forces shot and killed the Palestinian assailant, Ahmad Moustafa Erekat (newphew of Saeb Erekat) without reason.

To believe, as some have claimed, that this even doesn’t in fact prove that it was an intentional car-ramming attack, you’d have to believe the following: the driver’s foot, as he was slowing down for the checkpoint, ‘accidentally’ moved from the brake to the accelerator, and that his hands ‘accidentally’ turned the steering wheel sharply to the right in a way that directly hit the checkpoint booth and the soldier inside.

Moreover, the Israeli border police officer who you see in the video being struck by the vehicle, Shani Orr Hama Kadosh, who was lightly injured, said in an interview that it clearly appeared to be intentional:

“I signaled to him to halt, the car started to slow down, and I moved in his direction…He saw that I took a step, he looked me in the eye, turned the steering wheel and rammed into me, and I flew to the other side [of the median]”.

Yet, despite the clear video evidence, and testimony from the victim, here’s the headline Sky News used in their June 25th article about the incident: 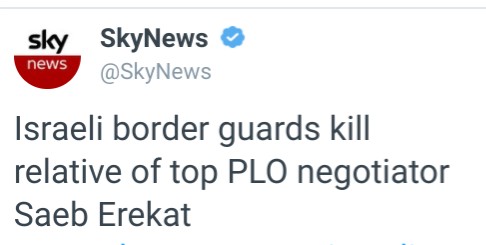 It’s an especially biased and misleading headline given that the article actually included the clip of the attack we embedded above.

An accurate headline would have focused on (or at least mentioned!) that the person Israel “killed” was a Palestinian attacker. Instead, editors totally ignored this fact, and instead highlighted the Palestinian attacker’s relationship to Saeb Erekat.

After our complaints, the headline was revised to the following, which, as you can see, is nearly as problematic as the original:

But, the headline – which amplifies Saeb Erkekat’s call for an investigation over what he’s quoted as characterising as the soldiers’ murder of his nephew – wasn’t the only biased element of the piece.

The Sky News article also cites an op-ed at Haaretz by the attacker’s cousin, Dalal Iriqat, who claimed that the Israelis “left [his cousin] bleeding for more than an hour” and that “the occupation army prevented an ambulance from getting to him”.  Then, in his own voice, the Sky News reporter writes the following, which serves to lend credibility to Iriqat’s false allegations:

Video of the moments after the incident shows the man moving on the ground and confirms that no medial assistance was given to him at that point.

However, as we pointed out to the journalist, Mark Stone, in a tweet, an Israeli Border Police Spokesperson had already responded to that accusation, noting that medics had arrived at the scene within minutes of the incident, and that the footage in question had been filmed prior to their arrival.

Hi @Stone_SkyNews I know you didn't write what we believe is a biased headline, but this sentence is misleading:

"Video…moments after the incident confirms that no medical assistance was given to the man after he was shot."

Earlier a Border Police Spokesperson replied to that pic.twitter.com/nBwWsnzhEq

To his credit, Stone responded to us, agreed that our concerns were valid and added the following clarifying sentence:

The police say medics were on the scene within minutes but were forced to declare him dead shortly after.

We commend Stone on the correction.