The piece, in an effort to provide international context to the charge against Grennel, turns to Israel in the following paragraph:

Israel uses its pro-LGBTQ+ policies to garner support in the US and western Europe, and to promote itself as a beacon of tolerance in a hostile neighbourhood. By promoting gay rights, activists claim, Israel “pink-washes” its human rights abuse of Palestinians.

However, the pinkwashing accusation against Israel is nothing more than an ad hominem attack disguised as a counter-argument.  The reason why ad hominem attacks are considered logical fallacies is because they question the motives of your opponent – which is irrelevant to the argument – in order to deflect attention away from the issue being debated.

Since pro-Palestinian activists can’t possibly refute the argument that Israel’s record on LGBT rights is dramatically more progressive than in ‘Palestine‘, they pivot instead to the putative motives of Israeli and pro-Israeli activists who boast of the country’s tolerance towards sexual minorities.

As pro-Palestinian activists rarely focus their efforts on peace, but, instead, on demonising Israel as a uniquely malevolent force in the world whilst painting Palestinian aspirations as intrinsically progressive, any information which contradicts this moral binary must be obfuscated.

The fact is that the Palestinians are among the most homophobic people in the world.  As this graph illustrating a 2014 Pew poll demonstrates, only 1 per cent of Palestinians believe homosexuality is morally acceptable. 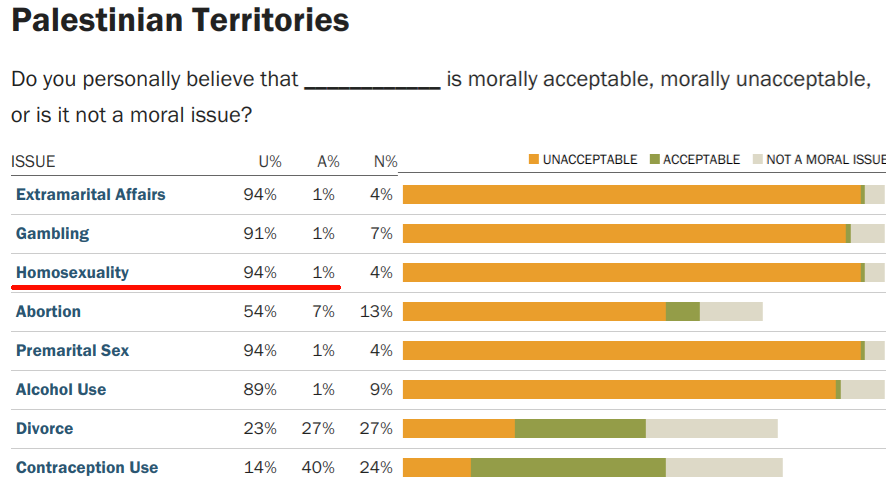 Read these reports by Freedom House on the broader civil rights protections offered by Israel in comparison to the PA to understand that Palestinian intolerance towards gays is representative of a vast freedom and tolerance gap between the two societies – an indisputable political reality that the term “pinkwashing” tries to wash over.

Like Loading...
Tags from the story
Guardian, Homophobia, Israel, LGBT, LGBT community, Mark Gevisser, Pinkwashing, Richard Grenell
Written By
Adam Levick
More from Adam Levick
Over at Israellycool, you can find a collection of tweets by some...
Read More