On September 15th the BBC News website published an article on its ‘Middle East’ page in which Middle East editor Jeremy Bowen gave his take on the agreements between Israel and the UAE and Bahrain due to be signed later in the day: “Five reasons why Israel’s peace deals with the UAE and Bahrain matter”. 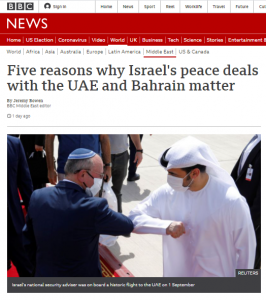 “Once again, they are left holding the wooden spoon.

They have condemned the Abraham Accords as a betrayal. The new agreement breaks a long-standing Arab consensus that the price of normal relations with Israel was independence for the Palestinians.

But now Israel is cementing new public relationships with Arab states while the Palestinians still languish under occupation in East Jerusalem and the West Bank, and in what amounts to an open prison in Gaza.” [emphasis added]

The Gaza Strip has of course not been “under occupation” for fifteen years and neither is it “an open prison”. Bowen however chose to promote that politically motivated dogma without making any mention of the factors that made necessary the counter-terrorism measures imposed by Israel and Egypt which affect travel into their respective territories.

Not only did the person tasked with providing BBC audiences with “a deeper understanding” of the region for the past fifteen years whitewash the crucially relevant issue of Palestinian terrorism, he made no effort to clarify that until the Covid 19 pandemic, thousands of Gaza Strip residents exited the territory into Israel via the Erez crossing every month: e.g. 26,900 in January 2020 and 22,100 in February 2020.

There is of course nothing novel about Bowen’s use of that smear so often used by anti-Israel campaigners: it has been repeatedly promoted on a variety of BBC platforms in the past, including by Bowen himself.

Although the BBC’s new Director General recently claimed that impartiality is a “bedrock” for the corporation, its Middle East editor indulges himself with a politically motivated smear taken straight from the toolkit of those engaging in the delegitimisation of Israel.

Mr Davie’s concerns about impartiality and journalists’ social media use will probably not be eased by the recommended reading tweeted by Jeremy Bowen on the same day: 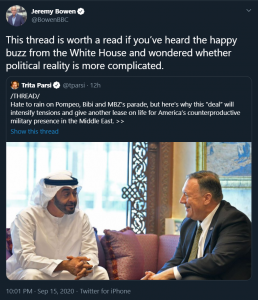 The author of the thread deemed “worth a read” by the BBC’s Middle East editor – Trita Parsi – was formerly the founder and president of the National Iranian American Council (NIAC), regarded by some as a lobbying organisation for the Iranian regime.

Parsi recently moved on to co-found the ‘Quincy Institute for Responsible Statecraft’ (which, inter alia, opposes the current US sanctions on Iran) and his thread promotes an article by that think tank alongside another by himself in his capacity as its executive vice president.

Jeremy Bowen of course did not bother to inform those who followed his advice and read the thread of its author’s record and agenda or of the fact that among his latest organisation’s ‘experts’ are Stephen Walt and John Mearsheimer (authors of ‘The Israel Lobby and US Foreign Policy’) and Lawrence Wilkerson – promoter of the conspiracy theory claiming that the use of chemical weapons in Syria could have been “an Israeli false flag operation”.

At least now we now know what type of sources the man providing BBC Middle East analysis thinks are “worth a read”.

BBC FLOUTS ITS OWN EDITORIAL GUIDELINES WITH IRAN TALKS INTERVIEWEES