On the afternoon of September 30th the BBC News website published a report titled “Coronavirus: Israel passes law to ban mass protests during lockdown” on its ‘Middle East’ page.

The main image originally used to illustrate that report showed a demonstrator holding a placard with a quote allegedly from Thomas Jefferson.

CAMERA UK wrote to the BBC News website pointing out that there is no evidence that Jefferson ever made that statement and suggesting that, in light of the BBC’s self-appointed role as an exposer of disinformation, it was not the best choice of image to illustrate the report.

Although we did not receive a reply, the image was subsequently replaced. 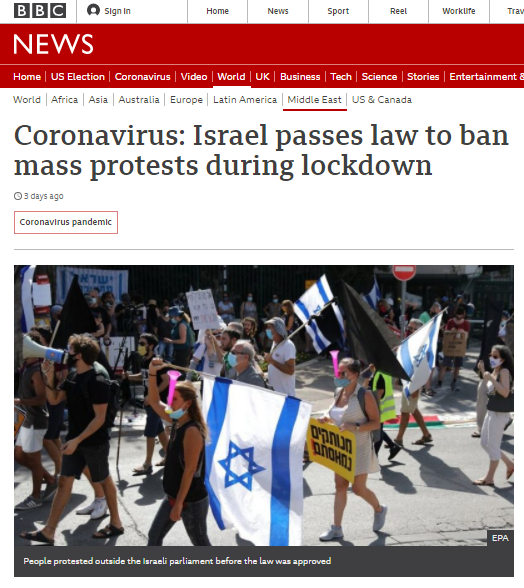 Like Loading...
Tags from the story
Accuracy, BBC, BBC corrections, BBc Monitoring, BBC News, BBC Online, Complaints, Coronavirus, Corrections, Israel
Written By
Hadar Sela
More from Hadar Sela
A correction has been made to an article appearing in the Middle...
Read More