On October 1st the BBC News website published a report headlined “Lebanon and Israel to hold ‘historic’ maritime border talks” on its ‘Middle East’ page which opened with a largely reasonable portrayal of the story. 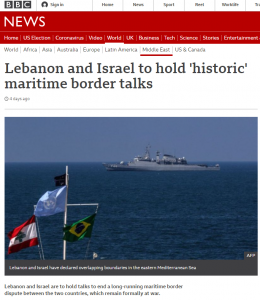 “Lebanon and Israel are to hold talks to end a long-running maritime border dispute between the two countries, which remain formally at war.

The speaker of the Lebanese parliament said a “framework” had been agreed for the negotiations, which will take place under the auspices of the UN.

Israel’s energy minister said the talks would begin after mid-October.

The US welcomed what it called an “historic agreement” following almost three years of mediation. […]

Lebanon and Israel have declared overlapping boundaries in the eastern Mediterranean Sea, and a resolution of the dispute would allow them to exploit offshore natural gas fields.”

Among the additional reading offered to readers is a link to an article written by Yolande Knell in July 2011. Nearly two years later Knell produced a longer report on the same topic but that – as noted here last year – was the last BBC audiences heard of a story which has been ongoing for years.

“The neighbouring states have technically remained at war since the Arab-Israeli conflict of 1948-49.

It is one of the region’s tensest frontiers, where Israel forces face those of the Lebanese army and the Shia militant group, Hezbollah, and peacekeepers from the UN Interim Force In Lebanon (Unifil) attempt to maintain calm.

In 2006, Israel and Hezbollah fought a month-long war that killed some 1,190 Lebanese and 163 Israelis. The conflict ended in a UN-brokered ceasefire.”

The BBC made no effort to inform readers that under the terms of UN SC resolution 1701, Hizballah forces should not be in southern Lebanon and that UNIFIL has failed to enforce the terms of that resolution since it was passed in 2006. Neither did the BBC’s report clarify that the same terrorist organisation has thwarted past attempts to solve the dispute over the maritime border.

Listeners to BBC Radio 4 on the same day were wrongly informed (from 06:30 here) in a news bulletin aired on ‘The World Tonight’ programme that the upcoming talks are not only about the maritime border.

Newsreader: “Israel and Lebanon have agreed to hold talks on their disputed maritime and land borders under US mediation. The two countries remain technically at war. The US Secretary of State Mike Pompeo has hailed the move as historic.”

The claim that the talks also concern the land border is inaccurate, as reported by the Jerusalem Post.

“Negotiations between Israel and Lebanon, set to begin next week, will only be on maritime borders, a diplomatic source in Jerusalem said on Sunday, despite indications to the contrary from Washington and Beirut.

Though disputes about the Blue Line, as the land border between Israel and Lebanon is known, came up in pre-negotiation talks, Israel did not agree to negotiate land borders.

Israel does not rule out Blue Line negotiations, but they would have to be separate, and different people would be involved. The Energy Ministry is deeply involved in the maritime border talks, because there is natural gas in that part of the Mediterranean, which both sides want to develop.”

The statement put out by the US Secretary of State referred to “talks to define unresolved issues related to the Blue Line” as a “separate” issue to which “the United States also looks forward”.

The news report continued with a contribution form the BBC’s Arab affairs editor Sebastian Usher, whose more cautious phrasing makes that misleading declaration by the newsreader all the more incomprehensible.

Usher: “Talks on the disputed land border – the so-called Blue Line – have yet to be fixed.”

Later in the same programme (from 28:30 here) presenter Paul Henley introduced an item about the same story with a rather odd description of the aim of the negotiations: [emphasis added]

Henley: “Representatives of Israel and Lebanon – two countries still technically at war – have agreed to sit down for talks on cooperation for the first time in 30 years. The United States is the mediator and the motivation is principally financial. As soon as the two countries can agree a maritime border, billions of dollars’ worth of undersea gas stands to be pumped out of the two nations’ disputed sea bed.”

Henley then introduced Israeli journalist Barak Ravid, currently at Walla! News, who told listeners of “direct negotiations” between parties “at the same table”.

Ravid: “…for those two countries to sit together at the same table…”

Ravid: “Both sides will start formal direct negotiations mediated by the United States…”

Ravid: “For the first time in 30 years Israeli and Lebanese officials will sit in the same room…”

However, as reported by the Times of Israel, that is apparently not to be the case.

“Lebanon’s parliament speaker confirmed Thursday that an agreement has been reached on a framework for rare, indirect talks between Lebanon and Israel over a longstanding disputed maritime border between the two countries. […]

Indirect talks mean that Lebanese army negotiators will not be speaking directly to members of the Israeli delegation but through UN officials.”

Henley tried to shoehorn some specific framing into the story:

Henley: “Now the US is mediating. Of course Lebanon needs the money but is there another possible explanation for why the breakthrough is now; something to do with the approaching US elections perhaps?”

Ravid pointed out that the issue has been “on the table for a decade” and that there had been previous attempts to resolve it by the Obama administration and by the Trump administration last year.

One would of course hope that the programme’s production team had done enough research into the story to know that, but the redundant framing from the presenter of a programme which purports to provide listeners with “intelligent analysis” appears to suggest that is not the case.

A BORDER DISPUTE BBC AUDIENCES KNOW NOTHING ABOUT

REVISITING A STORY THE BBC LAST MENTIONED IN 2013