Previously (see ‘related articles’ below) we have looked at two videos created by the BBC in 2004 (and still available in the UK) within the framework of its ‘Bitesize’ online study support resource which includes material relating to the GCSE exams taken by high school students in parts of Great Britain and Northern Ireland.

One of the sections offered under the history category is titled ‘The Middle East class clips’ and it includes seven videos. The third video (chronologically) relates to the Suez Crisis of 1956 and is titled “Suez and the arrival of the Cold War in the Middle East”. 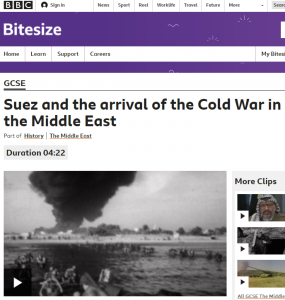 “By 1956, the Middle East was the cauldron of the growing Cold War between Russia and the United States that would dominate world politics and affairs for the next 30 years. In 1956, Gamal Abdel Nasser renationalised the Suez Canal and set off a chain reaction of events that saw the Israelis invade the Sinai and finish 10 miles from the canal, and an invasion by British and French troops. This situation was hatched by the British and the French with Israeli collusion. Whilst it was a military triumph for Ben-Gurion and Israel, it weakened the position of Britain and France who had acted without American knowledge. This event saw them replaced by the United States and Russia as the major players in the region and heralded in the era of the Cold War in the Middle East. Egypt courted Russia for arms and international support, while Israel drew closer to America. Professor Noam Chomsky put it more starkly as a battle for control of oil and resources in the region.”

Readers may already be wondering why the BBC selected an academic introduced as a “Professor of Linguistics and Philosophy MIT” to explain oil resources in the Middle East to high school pupils. The other contributors to this video are Rashid Khalidi “Professor of Arab Studies, Colombia University” and Avi Shlaim “Professor of International Relations, Oxford University”. As was the case in the previous two videos aimed at 14 to 16 year-olds, viewers are not informed of the anti-Israel activities of Noam Chomsky and two of the other ostensibly neutral academic contributors, Shlaim and Khalidi.

Like the previous two videos, this one is presented by the recently retired BBC Northern Ireland journalist Noel Thompson.

Thompson: “In 1952 Gamal Abdel Nasser led a coup d’état in Egypt and overthrew the monarchist regime. For Israel, Nasser’s Arab nationalism made Egypt a threat. Egypt was home to one of the world’s most important transportation systems: the Suez Canal. But it was owned by Britain and France and very few of the huge profits made on the canal ever found their way into the Egyptian economy. In 1956 Nasser nationalized the Suez Canal, bringing it under his control. Enraged, Britain and France plotted to win back the waterway.”

With no explanation given as to why Israel considered “Nasser’s Arab nationalism” a threat and no clarification of the fact that Egypt had sold its shares in the Suez Canal operating company to Britain in 1875, viewers see unidentified archive footage before being told that:

Thompson: “Israel colluded with Britain and France in the plan to retake Suez.”

Shlaim: “Israel jumped on the bandwagon of the war. The one thing that all three participants agreed on was that Nasser was a bad thing and one of the aims of all three was to try and topple Nasser by defeating his army. But there was no imminent military threat to Israel.”

Viewers are not informed of the fact that “[i]n 1955 – 1956 Israel’s borders were constantly attacked by Fedayeen terrorists, recruited by Egypt and operated from the Gaza Strip” and that “[i]n 1955 alone, 260 Israeli citizens were killed or wounded by fedayeen.”

Neither are they told that in addition to the earlier stopping of Israeli ships from passing through the Suez Canal, Nasser had blocked the Strait of Tiran to Israeli shipping, preventing access to the Red Sea port of Eilat. Instead, audiences are left with Shlaim’s partial portrayal of Israel’s motives.

Thompson: “Israeli troops invaded Egypt and came within ten miles of the Suez Canal. This was the pretext for the British and French to intervene. It prompted an international crisis. America condemned the attack at the United Nations. The US was furious at being kept in the dark by Britain and France and had no intention of supporting their ambitions in the area. Eventually the UN worked out a deal with Egypt and Israel in which Israel would withdraw. So Israel withdrew but for them the Suez crisis was a military triumph. David Ben Gurion showed the world that Israel was here to stay. Britain and France were humiliated. They would never recover their power in the region. That power vacuum was filled by the Cold War rivals America and the USSR.”

Khalidi: “It wasn’t until 1956 that it became clear with the outcome of the Suez war that they had supplanted the British and the French and that there were new big boys on the block.”

Viewers are told nothing of the 1955 arms deal between the USSR and Egypt under which the former would supply weapons to the latter via Czechoslovakia which rather deflates Khalidi’s theory.

Thompson: “Behind the superpowers’ interest in the territorial wrangling lay a shared overriding motive: oil.”

Chomsky: “The Persian Gulf, the Arabian Peninsula and the Gulf is by far the richest energy resource in the world. It has the largest reserves, the most easily accessible. It’s been understood for a long time, certainly since the Second World War, that control of the energy resources of that region is a very powerful leader of world control.”

Thompson: “To promote their own strategic and economic interests, both powers looked for friends in the region. Relations were built on arms deals and loans as much as on ideological solidarity.”

Shlaim: “The local states in the Middle East were happy for this to happen. They imported the Cold War because they saw the possibility of playing off the superpowers against one another. President Nasser of Egypt was particularly opportunistic in trying to play off the superpowers but as America was uncooperative and refused to supply arms, he ended up as a close ally of the Soviet Union.”

Thompson: “The US used the same tools to build a relationship with Israel.”

Khalidi: “The post-World War Two period has to be seen not only in terms of the impact of the Holocaust but also in terms of a sophisticated understanding on the part of the most acute Zionist leaders that the United States was the world power with whom they should align themselves. And this paid off.”

The film closes with an unsupported and unexplained claim from Thompson, followed by a quick flirt with antisemitic ‘Jewish lobby’ tropes.

Thompson: “Israel assumed the role of America’s regional policeman. This, and the continued influence of the Zionist lobby on successive governments, served to increase Arab hostility towards Israel.”

Interestingly, the BBC has nothing to tell its young audiences about the role played by the USSR in fanning the flames of Arab antisemitism during the Cold War.

Another topic the BBC chooses not to address is Nasser’s treatment of Egypt’s ancient Jewish community during the Suez crisis.

“…Nasser declared that the Jews were enemies of the state and the massive expulsion of the Jews continued with 25,000 Jews fleeing. Jews were given 2 days to evacuate their property, which was later confiscated by the government, and were forced to leave with one bag and no more than twenty dollars in hand.  Nearly 1,000 of those who remained in Egypt were imprisoned or tortured.”

Like its predecessors, this educational video gives British school students a superficial and incomplete view of a chapter of Middle East history while failing to clarify the highly relevant “particular viewpoints” of its academic contributors.