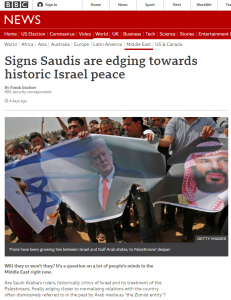 “Are Saudi Arabia’s rulers, historically critics of Israel and its treatment of the Palestinians, finally edging closer to normalising relations with the country often dismissively referred to in the past by Arab media as “the Zionist entity”?

“This low level of discourse is not what we expect from officials who seek to gain global support for their cause,” said Prince Bandar in the three-part interview.

“Their [Palestinian leaders’] transgression against the Gulf states’ leadership with this reprehensible discourse is entirely unacceptable.”

Palestinian leaders initially described the UAE and Bahrain’s normalisation of relations with Israel as a “betrayal” and “a stab in the back”.”

If readers at that point raised an eyebrow at Prince Bandar’s use of the term “reprehensible discourse” to describe the use of the terms “betrayal” and “a stab in the back”, that would be because throughout the BBC’s coverage of the Abraham Accords, it has avoided reporting the more extreme ‘criticism’ (as Gardner euphemistically puts it) from Palestinian officials and in official Palestinian media channels, such as the following:

“What happened is treason… This is treachery. Not just against the Palestinian people. This is a denial of the heritage of Prophet Muhammad… Are Jerusalem and the Al-Aqsa Mosque goods that are sold in the market of political prostitution? … [The UAE] have sold Jerusalem, have relinquished Jerusalem, and are trying to market their treason as them opening the door for the worshippers to come and pray in Jerusalem… Whoever wants to come visit the Al-Aqsa Mosque through the gate of Palestine: Welcome, and we will rejoice over him… But whoever wants to come through the Israeli gate is unwanted, and he will find nothing but the shoes of the people of Jerusalem and the spit of the people of Jerusalem in his face…” source

PA Grand Mufti and Palestinian Supreme Fatwa Council Chairman Muhammad Hussein: “It is forbidden for a Muslim to arrive in a plane of the United Arab Emirates or not of the United Arab Emirates to the Lod Airport [in Israel], which today they call Ben Gurion Airport, in order to come and pray at the Al-Aqsa Mosque. This is false marketing in terms of religious law, legally false, religiously offensive.” source

“This Arab tumor is beyond any attack that the occupation has carried out, because it comes from within our Arab body, and from leaders who were supposed to boycott the occupation and America by all means – politically and economically.” source

“You have become the occupiers’ dogs, O [UAE Crown Prince Mohammed] bin Zayed [Al Nahyan] the collaborator…They stabbed you in the back, O Palestine…They sold the Al-Aqsa Mosque for a dollar.” source

Another notable point in Gardner’s article comes in his description of the 2002 Saudi initiative:

“Essentially, it offered Israel full normalisation with the entire Arab world in exchange for a withdrawal from all occupied territories, including the West Bank, Gaza Strip, Golan Heights and Lebanon, as well as giving the Palestinians East Jerusalem as their capital and reaching a “just solution” for Palestinian refugees who, in the Arab-Israel war of 1948-49, had been expelled or driven from their homes in what became Israel.” [emphasis added]

That phrasing obviously presents a partial picture of the circumstances under which people left their homes and became refugees. As our colleague Gilead Ini has documented:

“Historians agree that there was no single cause of the Arab flight from Palestine. In large part, the masses fled because they saw the Palestinian elite doing the same thing. In part, it was in response to exhortations by Arab military and political leaders that Palestinian civilians evacuate their homes until the end of the fighting. Vast numbers were simply fleeing the heavy fighting that surrounded them, or that they expected to soon disrupt their lives. In some instances, Palestinians were forced from their homes by the Jewish military. […]

The Palestinian leadership and elite set an example for the rest of society by evacuating their towns and villages early during the conflict, usually long before fighting neared their towns, and some even before the civil war began. (Or as commander of the Arab Legion John Bagot Glubb put it, “villages were frequently abandoned even before they were threatened by the progress of war.”) This behavior not only shattered the morale of the Palestinian masses, but also, in the words of historian Shabtai Teveth, “amounted to clear — albeit unwritten — instructions to flee Palestine.” […]

Palestinian leaders also explicitly instructed Palestinians to leave their homes. The Grand Mufti of Jerusalem, Haj Amin al Husseini, told a delegation of Haifa Arabs in January 1948 that they should “remove the women and children from the danger areas in order to reduce the number of casualties,” and continued to encourage evacuations in the months that followed. Indeed, just a few months later, when Haifa’s British, Jewish and Arab leadership were working to negotiate a truce, the Arab side, in line with the Mufti’s orders but to the great surprise of everyone involved, insisted on a complete evacuation of all Arab residents.”

The BBC is usually careful to include the word “fled” in its descriptions of the circumstances in which Palestinians became refugees – for example:

“Hundreds of thousands of Palestinians fled or were forced out of their native land during the war, in what they call the “Nakba” or “Catastrophe”.” source

“Monday’s protests were timed to mark the anniversary of Israel’s creation in 1948 and the hundreds of thousands of Palestinians who subsequently fled their homes or were displaced in the war that followed.” source

The BBC Academy’s ‘style guide’ for journalists reporting on Israel and the Palestinians states:

“There is a Palestinian demand that Palestinians “who fled or were forced out of their homes” during the 1948 and 1967 Arab/Israeli wars have the right to return to their homes. (There is a dispute between the two sides over why they are refugees, so the previous phrase is a useful one that reflects the two different views.)”

Frank Gardner, however, chose to make disappear the fact that a significant proportion of those refugees were not “expelled or driven from their homes” and with it, the responsibility of Palestinian and Arab leaders for the creation of the refugee issue.