BBC Arabic’s ‘Trending’ (تريندينغ) programme has once again used the pretext of “showcasing the views of the Arab street” in order to absolve itself of the responsibility to provide proper context to offensive discourse in the public sphere.

Readers may recall that last April the programme presented social media calls to eradicate Israel and displace its Jewish population by means of war as legitimate opinions expressed within an online debate. In June 2019, it amplified an antisemitic Facebook comment by a Tunisian journalist which (in addition to espousing a detailed theory of Jewish conspiracy) included the phrases “death to Israel” and “death to America”.

In the edition of the ‘Trending’ programme broadcast on October 8th it was the terrorist couple Ahlam Tamimi and her husband Nizar Tamimi* who were whitewashed, along with their past record and related social media comments.

Ahlam Tamimi is the terrorist who facilitated the August 9th, 2001 Sbarro suicide bombing in Jerusalem, killing 15 civilians. Nizar Tamimi participated in the murder of Israeli civilian Chaim Mizrahi on October 29th, 1993, stabbing him and setting his car on fire with his body in the trunk.

Not once during the entire 6 minutes of broadcast could one detect the slightest hint of criticism towards either of the two from BBC Arabic. The social media solidarity campaign supporting them was uncritically portrayed as a matter of freedom of speech for the weak and persecuted. No less notable were the selective omissions from the couple’s violent history: the programme referred to Ahlam as though she was merely “accused of involvement” in the Jerusalem bombing (despite her own public admission of the crime) and failed to mention the reason for Nizar’s imprisonment at all.

The programme, entitled “#Jordan: Ahlam_Tamimi_Your_Voice_is_Loud_and_Clear”, was hosted by BBC Arabic’s Rania ‘Attar; one of Trending’s regular presenters. Describing the Tamimis as “freed detainees** from Israeli prisons”, ‘Attar told her audience how the two met in the halls of an Israeli military court, got engaged while in prison and married once they were both released in the 2011 Gilad Shalit prisoner exchange, against a background of sentimental pictures of their newfound life in Amman, Jordan. 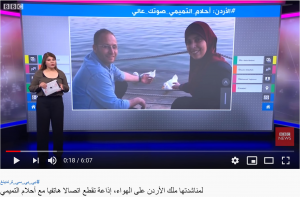 The BBC host continued with the latest developments in the couple’s story, explaining that Jordan had not renewed “detainee” Nizar’s permit to reside in the kingdom with his wife (herself a Jordanian citizen), resulting in his expulsion to Qatar earlier this month. She then quoted Nizar’s brother Mahmoud who claimed that the decision to expel the husband was related to the American extradition request currently pending against his wife and that the family considers it an indirect Jordanian acquiescence to American dictates.

Next it was explained what had triggered the social media campaign which gave the programme its hashtag-style name. Last Tuesday a radio host was supposedly documented censoring Tamimi as she was on air, making her plea to King ‘Abdullah II to let her husband back into Jordan. The Jordanian-Palestinian solidarity campaign which followed used the hashtag “#Ahlam_Tamimi_Your_Voice_is_Loud_and_Clear”. Among the many comments shown, ‘Attar featured those that praised Tamimi as a woman “of great value” and “honour”, whose story should be heard by “everyone”.

The host concluded the programme with a full, uncensored video of Ahlam Tamimi addressing the King for a second time. Only afterwards were viewers made aware of what ‘Attar referred to as “the main landmarks of Ahlam’s life”, with the following statements being used to elaborate on her terrorist activity:

“In 2013, American Department of Justice ranked her on the list of ‘most dangerous wanted terrorists’, under the accusation of conspiring to kill Americans in the ‘Sbarro’ restaurant bombing in Jerusalem”

Apparently BBC Arabic editors believe that Ahlam Tamimi’s connection to the Sbarro bombing is somehow ambiguous or yet to be proven. However, Tamimi herself has repeatedly boasted about her part in that terror attack.

The BBC also omitted any mention of the heavy death toll of the Sbarro bombing – 15 Israeli civilians, including seven minors aged 2-16, and a pregnant woman. This is how Tamimi responded when she heard how many Jewish children she helped to kill:

To this day, Tamimi has never expressed any remorse over the outcome of her actions; quite the contrary:

Also notable is BBC Arabic’s approach towards Ahlam’s definition as a terrorist. Although the programme mentioned that America’s DOJ put her on its list of “most dangerous wanted terrorists” and that she was the first woman to join the al-Qassam battalions, the BBC itself refrained from describing her as a terrorist. This is contrary to the official position of the United Kingdom on the matter, which considers both al-Qassam battalions in general and the “Sbarro” attack in particular as “terrorist” from 2001 to this day.

Once again the BBC’s level of commitment to its own editorial guidelines – including the section titled “Harm and Offence” – is on display. In addition, by portraying the pro-Tamimi social media campaign as one that is mainly about human rights, BBC Arabic concealed the possibility that the couple’s popularity among Jordanians and Palestinians is not despite what they did, but because of it.

It was Ahlam’s part in killing innocent civilians which brought her glory in the eyes of her Arabic-speaking surroundings. Many of the comments appearing under the hashtag “#Ahlam_Tamimi_Your_Voice_is_Loud_and_Clear” (of the kind not highlighted on the BBC’s programme) reveal just that public atmosphere.

Appendix: examples of some of the posts using the #Ahlam_Tamimi_Your_Voice_is_Loud_and_Clear hashtag which were not highlighted by BBC Arabic’s editors:

“[…] This is a daughter of the heroes and a sister of [true] men – she took part in an attack where she killed 21 Zionist soldiers [sic]. Her shoes are worth half of the moustache [i.e. honor] of the Arab homeland […]” ‘Aboud Bani Salameh, October 6

“Our sister Ahlam, her shoes are on the head of every traitor and collaborator, she did what Arab armies did not do [even] jointly and participated in the killing of *21 [sic] Zionist dogs* […]” Ahmaf, October 7

“We hold a glorious heroine like Ahlam Tamimi, if she asks for anything it is essentially her right, a woman who busted the Zionists’ nose to the ground, and that because of her they were living in horror days and nights, if it were different times she would have become an icon and a model, which she is indeed […]” Salah ad-Deen Barakat, October 7

”Unfortunately I did not have any information about Ahlam Tamimi! I definitely feel embarrassed that I did not know about such a hero, a hero not only because of what she did but also due to her patience […]” Shehab, October 7

“[…] someone who gave her spirit to Palestine. We are with you, for you and by you, Ahlam” Obada Alali, October 7

“She stomped on the dignity of the occupying entity [i.e. Israel] which half of the Arabs fawn today […] we all have her back” Khair Eldin Aljabri, October 7

“A hero among the heroes and heroines of Palestine” Heba Najadat, October 8

*Since both Ahlam and Nizar belong to the Tamimi clan, they had had identical family names even before they married.

**The Arabic word Aseer  أسيرmeans “captive”. It could also be translated as “prisoner”, but almost exclusively within one of the two terms “political prisoner” and “prisoner of war”. The Arabic word for a properly tried and sentenced prisoner is Sajeen سجين, which is rarely used by Arabic media outlets in the Palestinian context (this applies to all outlets, including Western-oriented ones). Since Aseer and its plural form, Asra أسرى, are often translated by Palestinian officials as “detainees” in order to indicate that the Israeli authorities which tried and sentenced them are illegitimate, this is the translation we chose here as well.