Despite the fact that the June 16th written backgrounder titled “Israel, annexation and the West Bank explained” (discussed here and here) still appears on the BBC News website’s ‘Middle East’ page, the corporation apparently decided that audiences were also in need of a filmed version of the same exercise.

Hence, on June 30th, visitors to the BBC News website’s ‘World’ and ‘Middle East’ pages found a video titled “Israel annexation: What is the West Bank?”. 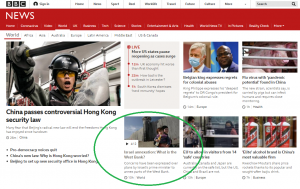 “Concerns have been expressed around the world over plans by Israel’s prime minister to annex parts of the West Bank.

Benjamin Netanyahu could make an announcement as early as 1 July – but what is the West Bank, and what might happen? 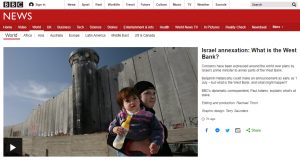 Given the BBC’s exclusive use of the partisan term ‘West Bank’, its complete failure to explain how and why that relatively recent appellation came about in its written backgrounder and its repeated avoidance of relevant history throughout all its generous coverage (see ‘related articles’ below) of the potential application of Israeli civilian law to parts of Area C, the BBC’s funding public may have hoped that they were finally going to receive some accurate and impartial information from Paul Adams.

An opening image of a Palestinian woman and her child against the context-free backdrop of one of the minority of concrete sections of the anti-terrorist fence is followed by more unexplained images before Adams’ ‘explanation’ begins. [emphasis in bold added]

Viewers heard no explanation of why there was a “war in 1967” and no mention of the fact that the surrounding Arab states intended to annihilate the then nineteen year-old State of Israel. They were not informed that Jordan “controlled” the area because (with British help) it had invaded and occupied it in 1948. Neither were they provided with any information concerning the mandatory context of British ‘control’ over the area or the fact that it had been assigned to the creation of a Jewish national home by the League of Nations.

The Jordanian origin of the term ‘West Bank’ as a device conceived by an invading country seeking to legitimise its occupation of land to which it had no legal claim is once again concealed from BBC audiences.

With those basic and highly relevant facts expunged – and with viewers left to decide for themselves whether the graphic designer Terry Saunders had intended to draw a fence or something reminiscent of a keffiyeh around the accompanying maps, and why – Adams continues. 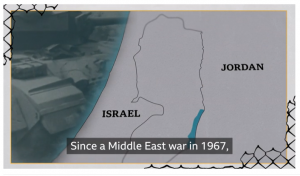 Adams: “But for centuries it’s been home to Palestinian Arabs, as many as three million of them today. And it’s long been seen by most people as the heart of a future Palestinian state.”

Adams’ failure to note that the area was also home to Jews until they were forced out by violence allows him to promote the suggestion that Jews had not lived in Judea & Samaria since “ancient, biblical” times.

Adams: “In the years that followed the war in 1967, Israeli civilians – settlers – started moving into the West Bank.”

Viewers see archive material apparently from the mid-1970s in which the community of Ofra is described as being “on what was once Arab land”.

Adams: “Some saw it as a long overdue return to parts of their ancient, biblical homeland. Slowly at first, but from the mid-1980s in larger and larger numbers. Pretty soon there were settlements all over the West Bank.”

Even according to the anti-settlements political NGO B’tselem, Israeli communities comprise less than 10% of the region and none of them are located in the 40% of the area which is under Palestinian Authority control.

Citing part of Article 49 of the Fourth Geneva Convention – but having failed to clarify that the territory concerned was previously under illegal Jordanian occupation – Adams goes on to give the BBC’s usual partisan portrayal of ‘international law’.

Adams: “Israel says it needs to hold on to some of the territory for its security. And it says Jews have every right to return to their ancestral homeland. But according to most interpretations of international law, the settlements are illegal. Since 1967 the number of Israeli Jews living in the West Bank and East Jerusalem has continued to rise.”

Failing to clarify that the current arrangement dividing the region into three areas – A, B and C – was agreed to by the PLO when it signed the Oslo Accords, Adams continues:

Adams: “Look at a map of the West Bank today and you see a confusing mess of settlements. Some in blocs, some in isolated outposts, between and around Palestinian towns. There are fences, roads and checkpoints to keep the settlers safe.”

Making no mention of the Second Intifada Palestinian terror war which brought about measures such as checkpoints, he goes on:

Adams: “If this is where a future Palestine is supposed to be, it’s started to look less and less viable.”

Viewers are not told why Adams considers the current situation any less viable than it was when the Oslo Accords were signed over a quarter of a century ago.

Adams: “But the one thing Israel hasn’t done until now is annex the West Bank, making the settlements officially part of Israel and not just part of a military occupation. If the government does it now, Jewish settlers, who are already Israeli citizens, would formally be living on sovereign Israeli territory. And not just some of them as envisaged in previous peace plans, but all of them.”

As noted here previously, the Clinton Parameters of 2000 proposed that “Israel would retain settlement blocs containing 80 percent of the settler population”.

Adams: “So why is all this happening now? Well that’s because in Donald Trump, Israel has perhaps the most pro-Israel American president there’s ever been. […] Earlier this year President Trump unveiled another peace plan.”

Refraining from clarifying that what he describes as “the old 1967 lines” are in fact the 1949 Armistice lines which were specifically defined as not being borders, Adams tells viewers:

Adams: “We’ve come a long way from the old 1967 lines. This plan sees Israel holding on to almost a third of the West Bank, far more than in any previous proposal. It does talk about a future Palestinian state in the ragged mess of what’s left. But only after four years and only subject to strict conditions.”

Viewers are not told that the “strict conditions” include the demilitarisation of the Gaza Strip and the disarming of the terror organisation currently ruling it. Neither are they informed of the proposed land swaps intended to “provide the State of Palestine with land reasonably comparable in size to the territory of pre-1967 West Bank and Gaza” or that the Palestinian leadership rejected the US proposal without even seeing it.

Glossing over the fact that the Israeli prime minister has had over a decade in which to apply Israeli law to parts of Area C, Adams goes on to speculate:

Adams: “For Israel’s Prime Minister Benjamin Netanyahu, it’s a once in a lifetime opportunity. He badly wants to be the leader who finally makes Israel’s control over the West Bank a legal irreversible fact. And he knows it may be a fleeting opportunity. After all, Donald Trump could be out of office in a matter of months if he fails to get re-elected in November. So will annexation go ahead? Netanyahu and his Israeli coalition partners haven’t agreed on how and when to do it. They’ve yet to produce a map or a timetable. This is making the White House nervous. It wants Israeli leaders to agree among themselves before it gives them the green light. It doesn’t know if Mr Netanyahu will simply ignore the bit about a future Palestinian state. Something most settlers definitely don’t want.”

In his closing lines, Adams recycles the long-standing BBC chimera of uniform Palestinian aspiration for a two-state solution while airbrushing both the Palestinian factions opposed to such an outcome and the obviously inconvenient fact that the Palestinians – who in Adams’ portrayal lack all agency or responsibility – have repeatedly rejected offers of statehood.

Adams: “And there’s all sorts of possible fallout. There could be violence. Palestinians may well see this as another, perhaps even the last, nail in the coffin for their dreams of statehood. And Israel could suffer enormous diplomatic damage around the world. Apart from the Trump administration, pretty much everyone is against annexation.”

That final sentence clearly reflects the purpose of this so-called ‘explanation’. Adams’ aim is to convince BBC audiences that “pretty much everyone” is against the as yet theoretical application of Israeli civilian law in places he claims are “seen by most people as the heart of a future Palestinian state”. Once again, however, the all-important history which would enable BBC audiences to make up their own minds on the issue is concealed from view, rendering this latest chapter in the BBC’s simplistic promotion of its chosen political narrative neither accurate nor impartial.