As regular readers know only too well, the BBC frequently quotes and promotes NGOs in its Middle East coverage.

Amnesty International and Human Rights Watch have long been among the organisations given regular – and sympathetic – BBC coverage that has included the highlighting of their campaigns. The Gaza Strip-based group PCHR featured prominently in BBC reporting during the summer 2014 conflict between Israel and Hamas.

Over the past six months, all three of those organisations have issued statements concerning a Gaza Strip resident arrested and held by Hamas since early April: HRW, Amnesty International, PCHR. 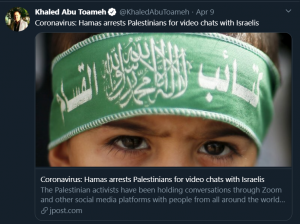 The story of the detention of journalist Rami Aman and two of his colleagues has been reported by a broad range of media outlets including dailies such as the New York Times, the Telegraph, the Guardian, agencies such as AP, Reuters and AFP (with which the BBC has commercial arrangements) and the magazine Newsweek.

“On Monday, April 6, 2020, Aman’s team organized a Zoom video call with Israeli and Gaza peace activists. The Gaza Youth Committee drew one of its biggest crowds ever, more than 200 participants.

Two days later, Aman was denounced to Hamas in a series of vituperative Facebook posts by Hind Khoudary, a former research consultant with Amnesty International. Hours later, Hamas arrested him for the crime of pursuing “normalization” with Israelis.”

In June the topic was raised in the UK parliament and last month the case was brought to the United Nations.

Later in September, Hamas charged Aman and two others under military law.

“Hamas military prosecutors on Thursday charged three Palestinian activists in the Gaza Strip with “weakening revolutionary spirit” — a charge that could lead to years in prison — for holding a video conference with Israelis.

Rami Aman, a 38-year-old peace activist and Gaza resident, was detained in early April after holding a public “Skype With Your Enemy” video call in which Israelis participated. […]

Although both Human Rights Watch and Amnesty International immediately called for the activists’ release, Hamas authorities have held the detainees for five months without trial. […]

For months after his arrest, Aman did not appear before a court, although he was charged with espionage under the Palestinian civil code. Hamas authorities issued a second indictment on September 17 that was made public on Thursday afternoon.

Aman and the other two detainees are now being charged under military law, rather than the civilian penal code. The charge they have been indicted on — weakening revolutionary spirit — harkens back to statutes encoded in 1979 by the Palestine Liberation Organization, well before the establishment of Palestinian civilian legal institutions in Gaza and the West Bank.

“The practice of bringing civilians before military courts and putting them to trial under military law is a dangerous violation of human rights,” the detainees’ defense said in a statement.”

Remarkably, although two of the BBC’s most quoted and promoted NGOs have issued statements on this case and despite coverage by local and international media outlets, the BBC  – which maintains an office in the Gaza Strip; presumably in order to be able to inform its funding public and other audiences what is going on there – has chosen to completely ignore this story for over six months.

ON HAMAS REPRESSION, THE NY TIMES, AND AMNESTY INTERNATIONAL  (CAMERA)