Here’s an article in the Nov. 3 print edition of the Scottish Express – ‘On This Day’: 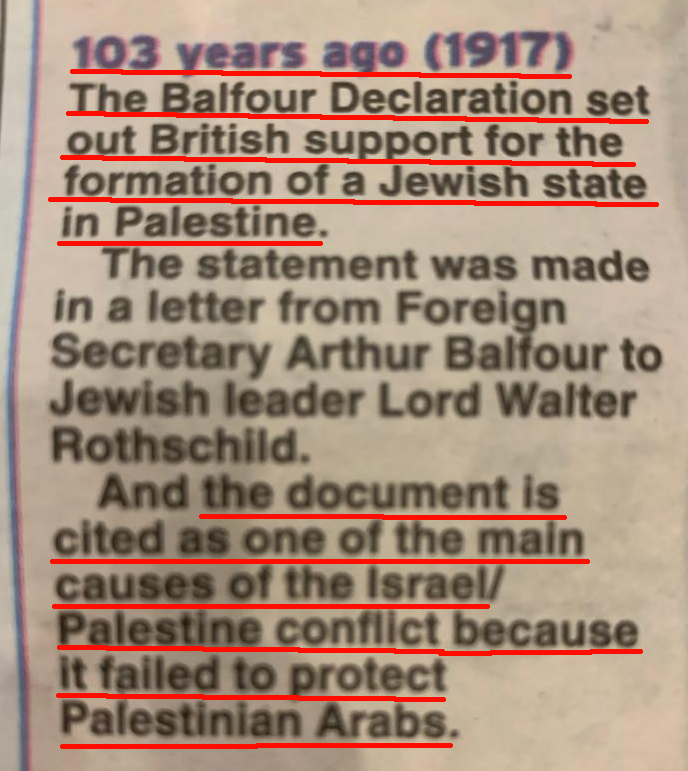 First, contrary to the assertion that the Balfour Declaration failed to protect Palestinian Arabs, the letter in fact says that “nothing shall be done which may prejudice the civil and religious rights of existing non-Jewish communities in Palestine”.

But, the more important distortion is the claim that the Balfour Declaration is “one of the main causes of the Israel/Palestine conflict”, absurd reasoning which conflates cause and effect.  It wasn’t the Balfour Declaration, which set in motion international recognition of the Jewish people’s right to self-determination in their historic homeland, that caused the Israel/Palestine conflict.  It was the Arabs’ and Palestinians’ consistent rejection of the morally intuitive idea endorsed in Lord Balfour’s letter – that “Jewish people constitute a nation and deserve an equal place among the family of nations in its own homeland” – that caused the conflict.

If Arabs and Palestinians had accepted the idea behind the Balfour Declaration, and tolerated but one Jewish state in a tiny sliver of land between the Mediterranean and Jordan, there wouldn’t have been the calamitous wars of 1948 and 1967, and Palestinians might have recently celebrated their 72nd year of independence.

In fact, to this day, Palestinians – who of course didn’t have distinct national aspirations until decades after Balfour – and their leadership describe the British letter as a “crime against humanity” and, drawing upon conspiratorial antisemitic discourse ubiquitous in Palestinian society, a fiendish plot by “global Zionism”.

The 100 plus year Palestinian campaign against Balfour in fact simply reinforces in the minds of many Israelis that the Palestinian leadership’s major grievance isn’t “refugees”, settlements or final borders, but with the very idea of a Jewish state.