Following last week’s EHRC report on Labour antisemitism, and Corbyn’s suspension from the party after he criticised the report on Facebook, claiming that the scale of the problem of antisemitism was “dramatically overstated” for “political reasons”, the Guardian’s Steve Bell published a cartoon depicting Starmer holding Corbyn’s head on a plate. 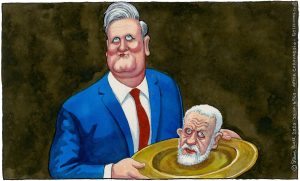 This was clearly as an allusion to the work of Caravaggio, referring to the Italian master’s famous two paintings (dated approximately to 1607-1610), both portraying Salome as she acquires the head of John the Baptist on a platter. The original paintings also contain two more characters: Salome’s self-proclaimed stepfather Herod, Tetrarch of the Galilee; and her mother Herodias.

The cartoon thus casts Starmer in the role of Salome (it is also evident by his “girly” eyelashes and red lips), while Corbyn is being depicted as John.   Also noteworthy is the absence of the two other characters, Herod and Herodias.  To understand just how offensive to Jews and their Christian allies this analogy is, we should first revisit the New Testament account upon which it is based.

The person known to Christians as John the Baptist is portrayed in the Gospels of the Christian Bible as a passionate Jewish prophet whose mission was to encourage spiritual revival and announce the coming of Jesus.  He lived and ministered near the Jordan River in the Judean desert, wore rough clothing made of camel’s hair, and ate locusts and honey. His ascetic, pious lifestyle can be understood in comparison to his contemporaries who lived at Qumran near the Dead Sea.

In response to John’s preaching on holiness and repentance, people from Jerusalem and Judea went to him to be immersed in the Jordan River. This is understood by Christians to be the practice of baptism, in which a minister does the immersing – thus the name “John the Baptist.”

However, when understood in the Jewish context of the time, demonstrated by archaeological findings at Qumran, and evidenced by continuous Jewish practice to this day, what John was actually doing was supervising observant Jews as they practiced ritual immersion by immersing themselves in the water of the Jordan.

Understanding of the practice of self-immersion in the time of John comes from the Dead Sea Scrolls, written and preserved by the Jewish sect that lived at Qumran. The act was a demonstration of repentance and holiness on the part of the person immersing themselves in the water. The person who wanted to be immersed under the supervision of John had to have turned from known sin in response to John’s preaching about the need to live a holy life.

John’s passion for righteousness and his belief that everyone needed to repent included Herod Antipas, the Roman governor at the time. In response to John telling Herod that his relationship with his brother’s wife went against the teaching of Torah, Herod had John arrested and put in prison. When the daughter of the woman having the inappropriate relationship with Herod requested John’s head on a platter in return for dancing for Herod on his birthday, Herod ordered John’s execution and indeed had his head presented on a platter.

As the Gospel of Mark reads:

“A convenient day arrived when Herod spread an evening meal on his birthday for his high officials and the military commanders and the most prominent men of Galilee. The daughter of Herodias came in and danced, pleasing Herod and those dining with him. The king said to the girl: ‘Ask me for whatever you want, and I will give it to you.’ Yes, he swore to her: ‘Whatever you ask me for, I will give it to you, up to half my kingdom.’ So she went out and said to her mother: ‘What should I ask for?’ She said: ‘The head of John the Baptist.’ She immediately rushed in to the king and made her request, saying: ‘I want you to give me right away on a platter the head of John the Baptist.’ Although this deeply grieved him, the king did not want to disregard her request, because of his oaths and his guests. So the king immediately sent a bodyguard and commanded him to bring John’s head. So he went off and beheaded him in the prison and brought his head on a platter. He gave it to the girl, and the girl gave it to her mother. When his disciples heard of it, they came and took his body and laid it in a tomb.” (Mark 6, 21-29)

“Herod put him (John) to death, though he was a good man and exhorted the Jews to lead righteous lives, to practice justice towards their fellows and piety towards God.”

Although it was Josephus’s writings which brought later generations to identify Herodias’ daughter as Salome, nowhere does he indicate she had anything to do with the death of John the Baptist.

In conclusion, John was an observant Jew who preached against sin and exhorted everyone to lead righteous lives. His entire life was dedicated to this mission, and he ended up losing his life because he confronted Herod’s sin with the teaching of Torah.

Bell’s equivalency between an observant Jew losing his life for preaching Torah and a man losing his position due to antisemitism is obscene.

Not only does the cartoon falsely present Jeremy Corbyn as innocent, it also draws parallels between Starmer and the character of Salome, and, perhaps most importantly, evokes speculation regarding the identity of Herod and Herodias in today’s UK politics (compared to their depiction in Caravaggio’s painting, the fact that they are nowhere to be found in the cartoon raises suspicions).

Thus, it further asserts that there was a sinister deal behind Starmer’s decision to suspend Corbyn, and even implies that the EHRC antisemitism report itself and Starmer’s response to it was an act of treachery.

Who’s the backstage political player who, in their cunning, convinced Starmer that he should seek to oust Corbyn (“Herodias”)?

Whose perverted desire to subjugate Starmer to their will brought them to actually do the deed and get rid of the former leader for the new one’s sake (“Herod”)?

By turning readers’ attention to the absence of these characters, the cartoon evokes an antisemitic interpretation along the lines of “the Jews are responsible for getting Corbyn removed from the party.”

In fact, we can look at Bell’s depiction of Corbyn as one which mirrors how the former Labour leader appears to see himself.

As the Andrew Rawnsley argued, one of the most under-appreciated faults of Corbyn is his “self-conceited estimation of his own purity” that feeds into his belief that not only is he not antisemitic, but he’s in fact incapable of being a transgressor, and must always be the sufferer, the martyr.  As with John the Baptist, it’s the challenge posed by Corbyn’s very piety, the narrative goes, which renders him a threat to his critics – those who are not his moral equals.

Though we’re not surprised that Bell – who has depicited Corbyn as the victim of a witch hunt, and previously employed the visual language of antisemitism – would canonise the former Labour leader, the chief editor’s decision to publish a cartoon legitimising those accusing Jews of treachery in their ‘targeting’ of him is another reason why most British Jews view the Guardian as an adversary in their fight against anti-Jewish bigotry.