As we saw previously, around a quarter of the November 10th afternoon edition of the BBC World Service radio programme ‘Newshour’ was given over (from 30:04 here) to the topic of the death earlier that day of Saeb Erekat.

In the second part of that item (from 34:17) presenter Paul Henley introduced the “tributes” described in the programme’s synopsis. [emphasis in italics in the original, emphasis in bold added]

Henley: “Some Israeli political figures who worked with Mr Erekat in negotiations have expressed their sadness, including the former foreign minister Tsipi Livni and the former cabinet minister Yossi Beilin. A spokesperson for Israel’s Likud party, Eli Vered Hazan, told the BBC Mr Erekat had been a formidable sparring partner.” 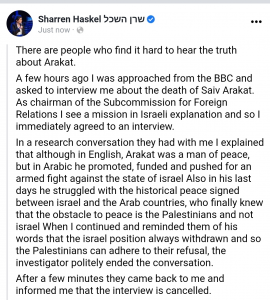 In addition, the five sentences spoken by Eli Vered Hazan which ‘Newshour’ chose to broadcast appear to have been cherry-picked from an interview in which he also brought up topics such as the Palestinian use of terror against Israelis and the Palestinian refusal to recognise Israel as the Jewish state.

Henley then introduced a frequent BBC interviewee, Mustafa Barghouti, whose record of on-air falsehoods, distortions and polemics is no doubt familiar to ‘Newshour’ producers.

Henley: “Well we can hear now from a long-time friend of Saeb Erekat, Mustafa Barghouti. He’s also a politician – general secretary of the Palestinian National Initiative – and I asked him how they’d come to know each other.”

Following Barghouti’s reminiscences about Erekat – including their meetings for “preparation of the first Intifada” in which around a thousand Palestinians were killed by Palestinians – Henley provided his interviewee with the cue for politicisation of the topic of conversation.

Henley: “His legacy is hardly intact, is it? The Oslo peace accords failed to hold in the long term. He was recently very critical of Arab nations normalising relations with Israel. Did he have a sense of some of his life’s work falling apart?”

Barghouti: “He was deeply disappointed like all Palestinians of course because his hopes were that there would be two-state solution and the Israeli extreme leadership headed by Netanyahu managed to destroy that. Everything that Netanyahu did since 1994 was to kill the possibility of peace based on two-state solution and to kill the possibility of a compromise between Palestinians and Israelis. And the last four years were the worst definitely – mainly because President Trump participated in helping Netanyahu killing that dream by promoting the so-called ‘deal of the century’ which is nothing but liquidating the Palestinian rights.”

Henley next further stoked the politicisation:

Henley: “I imagine Mr Erekat would have liked to have been here long enough to be aware of the change in the American presidency.”

Barghouti: “I think he would have had – like all Palestinians and the world probably – a great sense of relief, yes. Unfortunately President Trump proved to be the worst president in modern history and he has done so much damage to the Palestinian cause like he has done so much damage to human causes worldwide. I mean especially regarding the behaviour towards World Health Organisation or the global environment etc, etc. But the big challenge today is what will the new president Mr Biden will do. Will he be able to pressure Israel to stop that specific process that is going to destroy the possibility of the two-state solution and that is settlement activities that are illegal and represents the worst violation of international law?”

Predictably Henley made no effort to challenge Barghouti’s hyperbolic and politically motivated portrayal of Israeli building as “the worst violation of international law” before moving on to another ‘safe’ interviewee whose contribution could be anticipated in advance. 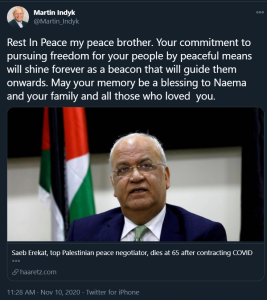 Henley: “Martin Indyk is a former US ambassador to Israel and former US special envoy for Israeli-Palestinian negotiations. He joins me. What’s your reaction to the death of Mr Erekat today, Ambassador?”

Throughout the interview Indyk persisted in mispronouncing the first name of his “peace brother” Erekat.

Indyk: “I’m very sad, as I think all people who are committed to seeing a peaceful resolution to the conflict between Israel and the Palestinians must be today. Because Saeb was one of the greatest advocates of the two-state solution and not only engaged in negotiations for – gosh – four decades now to try to achieve it but advocated for it publicly and particularly to Israeli audiences. He was a great man of peace and deeply committed to a peaceful resolution of the conflict.”

Henley made no effort to inform listeners of Erekat’s support for the PLO policy of paying convicted terrorists. Referring to the item’s earlier references to the Palestine Papers, he continued:

Henley: “And what did you make of him as a negotiator? We’ve heard reports about how he kept some offers under the table.”

Indyk: “Yes I think that’s really misleading. Saeb was a very frus…it was a very frustrating process to deal with Saeb…ah…because he was doggedly loyal to the negotiating positions of his leaders – first of all Yasser Arafat and then Abu Mazen: Mahmoud Abbas the Palestinian leader today. And he never strayed from his instructions in that regard, never engaged in back channel efforts to explore creative solutions. He was creative but it was very consistent with the positions of his leadership. That leadership would often go behind his back – because he was the chief negotiator – and allow others to make offers to the Israelis in back channel negotiations to test Israeli flexibility. But you know Saeb often didn’t know about that. His position was often undermined by that but he never waivered from the positions that his leadership had adopted.” […]

Henley: “You’re giving a detailed critique of the negotiating days of Saeb Erekat. At least they were negotiating, the two sides. It must seem like a golden age now.”

Indyk: ‘…it was a serious effort – by all the sides involved; the Israelis as well as the Palestinians – to try to resolve some really difficult, complicated, emotional, freighted issues involved with the final status. And Saeb led that issue, that effort, as I say for four decades in a very determined and often creative way but always committed to the outcome of an independent Palestinian state living side by side with the Jewish state of Israel.”

The twelve minute and forty-one second ‘Newshour’ tribute to Saeb Erekat ended at that point with Henley failing to clarify to listeners that Erekat’s party Fatah has in fact repeatedly refused to recognise Israel as the Jewish state and so Indyk’s closing claim is inaccurate and misleading.

Martin Indyk was the US special envoy for Israeli-Palestinian negotiations between July 2013 and June 2014 when he resigned. The talks in which he was involved came to an end when the Palestinians breached pre-negotiation agreements (in line with Erekat’s own strategy proposals) and announced ‘reconciliation’ with Hamas.

BBC audiences around the world heard nothing of that or the positions promoted by Arafat and Abbas loyalist Saeb Erekat which contributed to the failure to achieve his ostensible goal as ‘chief negotiator’.

As evidenced by the failure to address parts of Erekat’s record and the selective choice of interviewees (with edited comment from an Israeli thrown in to tick the ‘impartiality’ box), that was clearly not the aim of this uninformative and often misleading puff piece.

Nevertheless, some of the more problematic parts of the interviews with Barghouti and Indyk were rebroadcast in the evening edition of ‘Newshour’ (from 45:08 here) along with additional comment of the same genre from the PLO’s Hanan Ashrawi.