Even by the standards of bias we’re used to, a recent report by Channel 4 News (“Activist Akram Salhab on the Palestinian experience of British colonialism”, Dec. 14) reached a new low in the British media’s willingness to legitimise anti-Israel propaganda – a ‘report’ that doesn’t even feign fairness.

Akram Salhab, the show’s creator and narrator, is a British-Palestinian anti-Zionist activist and former Palestinian Solidarity Campaign student coordinator who routinely accuses Israel of “apartheid” and “ethnic cleansing”, and champions the Palestinians’ unlimited ‘right of return’.

The deceptions begin in the first few seconds, when Salhab complains that Palestinians’ history has been ‘silenced’ in the UK, which, as we argue later in our post, is arguably the exact opposite of the truth.

At 1:56, a Palestinian named Ziad claims his family was made refugees in 1948 as the result of the British, who “bear responsibility for it”.

However, if Palestinian leaders accepted the partition plan, as the Zionist leadership did, a Palestinian state would have been created, and there wouldn’t have been even one refugee.  The refugee problem is not Britain’s fault, but the result of the Arab decision to reject partition and launch a war of destruction against the nascent Jewish state.

At 3 minutes in, Salhab mentions the 1917 Balfour Declaration, and claims this was the first step in a series of events which led to their loss of the Palestinians’ homeland in 1948.

In addition to the fact that there wasn’t a distinct Palestinian national identity in 1917, Salhab’s narrative ignores the fact that, following Palestinian leaders’ rejection of the 1947 partition plan, and the 1948 war launched by Arab states, Jordan and Egypt occupied the West Bank and Gaza, and failed to create a Palestinian state within those territories.  British leaders had no role in such decisions by Arab leaders.

At about 3:30, Salhab claims that the official Israeli narrative was that, during the 1948 war, Palestinians left their homes of their own accord. This is misleading. Prominent Israeli historians claim it was a combination of factors: Palestinians leaving before the war in fear of the inevitable violence; some heeding the call by Arab military leaders to ‘temporarily’ flee in the belief they’d return when Israel was defeated; whilst others were indeed forced to flee due to Israeli military actions.

They then interview anti-Israel activists’ favourite historian, anti-Zionist Professor Emeritus at Oxford Avi Shlaim, who claims that Britain worked behind the scenes to “abort the birth of a Palestinian state”, and that Britain is largely responsible for the Palestinian tragedy.

First, this omits Britain’s policy of severely limiting the number of European Jews who could emigrate to Palestine.  And, it also erases Palestinian and Arab violence, and their refusal to consider a Jewish state within any borders, which had the result of “aborting” any chance of an independent Palestinian state.

At 4:26, Salhab discusses efforts to get British universities to adopt the International Holocaust Rememberance Alliance’s (IHRA) Working Definition of Antisemitism, a widely accepted international definition that he characterises as “controversial”.

He complains that IHRA defines calling the existence of the state of Israel a racist endeavor, “even though”, he counters, “hundreds of thousands of Palestinians were forcibly displaced in the process”.  Salhab’s argument appears to be that it shouldn’t be considered antisemitic to describe Israel as a “racist endeavor” because Israel is indeed a racist endeavor, and cites, as evidence of its “racist” nature, Israel’s alleged “forcible” displacement of Palestinians.

The flaws in this argument is clear.

It’s unclear how hundreds of thousands of Palestinians being displaced during the 1948 War (regardless of who is to blame for their dislocation) supports his claim Israel’s existence is a “racist endeavor”.

Jews in Palestine showed their willingness to share the land with Palestinian Arabs.  It was Arabs/Palestinians who, due largely to their racist opposition to Jewish presence in the land, opposed compromise and launched a war of annihilation against the Jews, a mere three years after six million Jews were murdered in the Holocaust.

If any national movement should be on the defensive against charges that their movement is intrinsically racist, it’s the Palestinians, not the Jews.

Then the video turns back to Shlaim, who charges that IHRA (which is non-legally binding) is about “censorship” and that the “fact” is that, in 1948, Israel expelled the Palestinians.

However, IHRA doesn’t define as antisemitic accusations that Israel expelled 700,000 Palestinians, or even accusations that it engaged in ethnic cleansing during the war.  As we’ve noted, it labels as antisemitic the charge that Israel is, by it’s very nature, a racist state – one which, like other racist states, would have no right to exist.  Shlaim dishonestly then adds that “Palestinians are not allowed to talk about their history”.

At 5:40 into the video, we’re introduced to a Palestinian chef and author named Joudie Kalla who complains that her editor asked her to remove the word “Palestine” from the title of her book on Palestinian cuisine.  However, we soon learn that she won the battle, and the book, published in the UK, ultimately included the word, and is titled “Palestine on a Plate”.

However, despite the fact that Kalla’s proposed title was ultimately accepted, Salhab oddly suggests that this is nonetheless an example of how Palestinians in the UK are “censored”.

At 6:39 into the video, Salhab discusses the ‘anti-poverty charity’ War on Want, and suggested that it’s charity status was unfairly targeted due to its work on Palestine.  A War on Want official, Rivkah Barnard, is then interviewed, and complains of such attempts to get them silenced which she fears will lead to others being fearful that they could be targeted if they speak up for Palestinian rights.

However, Salhab and Barnard mislead.

Though the UK Charity Commission rejected attempts to get War on Want’s charity status removed due to evidence presented that the NGO had links to terrorist groups, including PFLP, the same group which brought the charges, UK Lawyers for Israel (UKLFI), were successful in another attempt to sanction War on Want for their terror connections.  The  online payment company PayPal stopped accepting payments from the radical, highly politicised NGO when presented with evidence they had links to PFLP.

At 7:40, Salhab complains that the government’s counter-extremism program, called Prevent, includes “Vocal Support for Palestine” as a potential indicator of extremism.

First, as you can see by their own graphic, “Vocal Support for Palestine” is only one of the potential indicators for extremism cited: 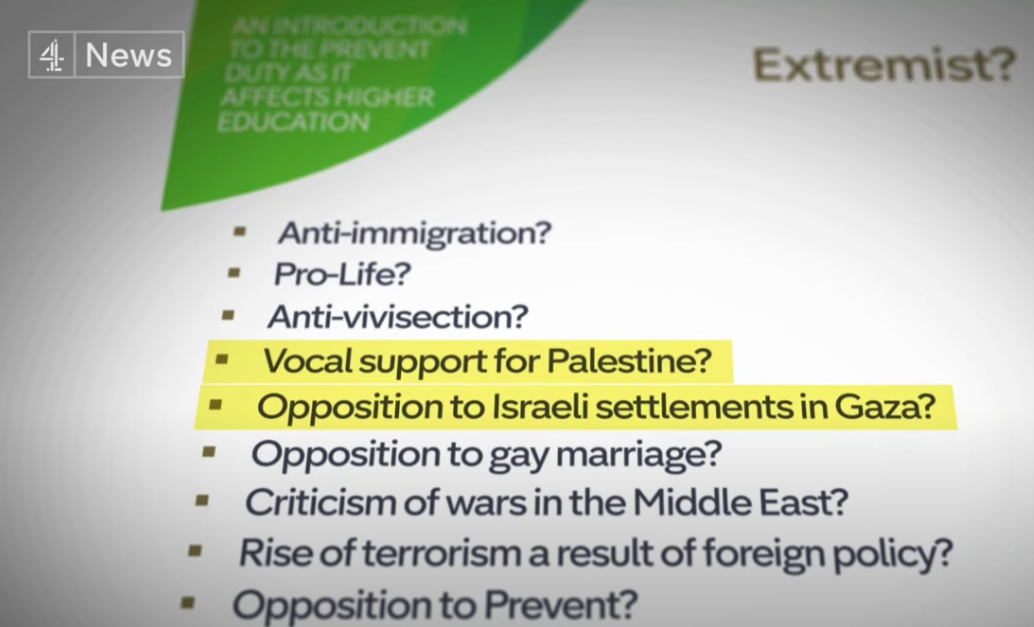 Moreover, David Toube, director of policy at Quilliam International, addressed complaints about the Palestinian component of Prevent in a piece at The Spectator:

Prevent is, in essence, a triage system. The overwhelming majority of referrals result in no action, and are quickly disposed of. It does not target Muslims: it focuses on violent extremism. Last year, the programme dealt with as many cases relating to far right threats as Islamist.

Further, as we’ve argued previously, concern over a connection between some forms of pro-Palestinian activism and extremist ideas is not without foundation.  A 2017 study by the CST and Jewish Policy Research Institute (JPR) demonsrated a “strong connection between extreme hostility towards Israel and traditional forms of antisemitism”.

The Channel 4 News report then shows a few final comments by Britons of Palestinian descent Salhab interviewed for the programme, several of whom reiterate Salhab’s primary argument: that the British government silences Palestinians.  It closes with comments by one of the Palestinian interviewees who complains that, in the UK, he’s “not allowed to talk” about his family’s history.

In addition to the specific distortions and inaccuracies in this Channel 4 News broadcast, the overarching narrative, that Palestinians in the UK are prohibited by the government from talking about or protesting Britain’s role in Palestine, is profoundly dishonest and arguably represents the opposite of the truth.

Debate in the UK over the Israeli-Palestinian conflict, in fact, takes up a disproportionate percentage of the public conversation on international affairs.  This is true in terms of media coverage of the issue, debate in Parliament, activism and scholarship within academia, and in the public square, where pro-Palestinian demos turn out thousands of marchers – a degree of political involvement that no other international human rights issue comes close to achieving.

The bottom line is that what Channel 4 News aired was not news or even opinion, but raw political advocacy based on arguments that don’t withstand even the most rudimentary critical scrutiny.