Back in July the BBC News website published a report headlined ‘Captagon: Italy seizes €1bn of amphetamines ‘made to fund IS’’ in which audiences were told that:

“Italian police have seized what they believe is a world-record haul of 14 tonnes of amphetamines they suspect were made in Syria to finance the jihadist group Islamic State (IS).

About 84 million counterfeit Captagon pills worth an estimated €1bn ($1.1bn; £0.9bn) were found in containers at the port of Salerno.”

That report is still available online in its original form. However in a filmed report published on the same website on December 21st – ‘Captagon: Destroying the frontline drug’ – BBC Middle East correspondent Quentin Sommerville stated that the source was not as originally thought.

“The source of origin wasn’t the Islamic State group, but this drugs bust and a wave of others which have occurred across the world, the source turned out to be Syria. The drugs came from the Syrian port of Latakia, the second haul the Italians have seized this summer. The Syrian regime and its ally, Lebanese militia Hezbollah, are deep in the drugs trade. It’s a major source of funding.” 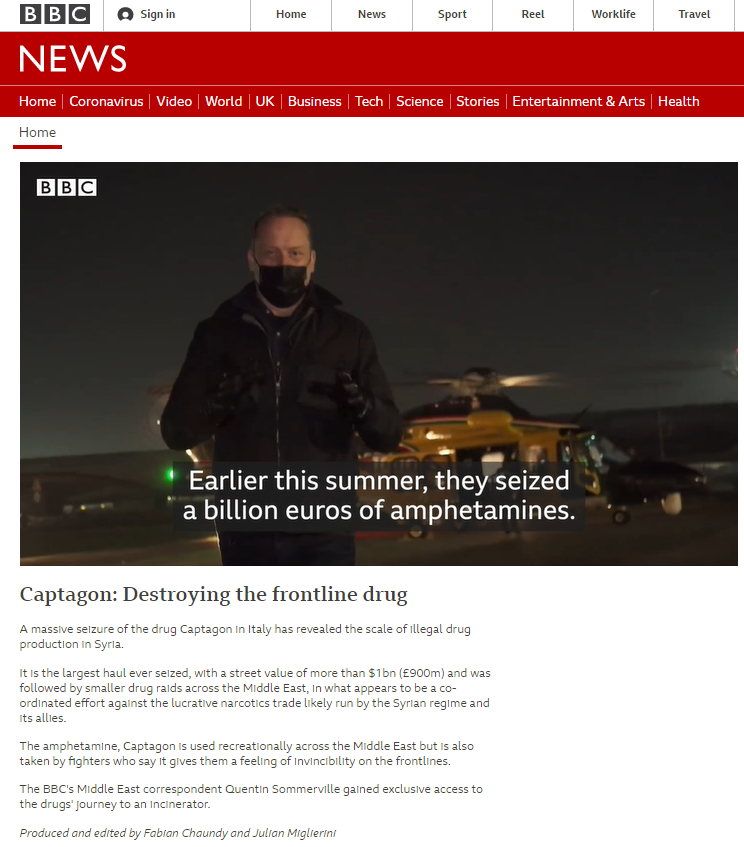 Sommerville provided no further details concerning Hizballah’s involvement in drug trafficking in that filmed report. Viewers searching for more information on the topic from the BBC would find that the corporation’s profile of Hizballah (last updated in 2016) provides no information whatsoever on that aspect of the terrorist organisation’s activities. A search online for previous BBC reporting on the topic only brings up articles from fifteen years ago, eight years ago and 2018, mostly relating to Hizballah’s drug related activities in South America.

In 2015 BBC Arabic aired a documentary about Captagon by a Lebanese journalist called Radwan Mortada but – as noted in an article published the following year by Columbia University’s School of International and Public Affairs – no mention was made of Hizballah’s role in the trafficking of that drug.

“Evidence strongly indicates that Hezbollah and their associated Syrian military connections are responsible for the increase in Syria’s Captagon production and distribution. […]

The conclusion of the 2006 Israel–Hezbollah War marked the beginning of increased Captagon seizures throughout the Middle East. The conflict left Hezbollah with a need to refill its coffers. The introduction of Hezbollah-controlled Captagon production facilities in the Bekaa Valley was a way to recoup lost funds. Produced cheaply and simply using ingredients that Iran (a known supporter of Hezbollah) was able to supply, the production of Captagon was an ideal solution for Hezbollah’s financial predicament. As this was occurring, Captagon production labs had been shut down by anti-drug authorities in Bulgaria and Turkey, creating an opening in the Captagon market. This opening was filled by the facilities in Lebanon, which were ideally located near the border with Syria, and had the protection and consent of Hezbollah. […]

In 2012, Lebanese anti-drug enforcement operations led to closures of several major production centers in the Bekaa Valley, including several facilities connected to Hezbollah. As such, producers relocated their drug operations across the border into Syria, whose ongoing conflict provided an ideal environment. Hezbollah has been actively involved in the conflict, with reports indicating that fighters have engaged in actions sympathetic to the Assad regime before 2013. This connection, combined with the closures in Lebanon, suggest that the increase in seizures of drugs moving outward from Syria was due to many of the Captagon producers relocating from Lebanon to Syria. Syria was no longer only a transit country; it had become the hub of production.”

In August 2020 the Washington Post published an article on the seizure of the shipment to which Sommerville’s filmed report relates.

“Intelligence officials concluded that the drugs did originate in Syria, but in factories located in areas controlled by President Bashar al-Assad’s government. The amphetamines departed Syria from Latakia, a coastal city with dedicated Iranian port facilities, and a known hub for smuggling operations by Tehran’s ally, Hezbollah. […]

Law enforcement officials have linked Hezbollah to a string of major drug seizures, in locations ranging from the empty desert along the Syria-Jordan border to urban centers in Saudi Arabia and the United Arab Emirates, to central and southern Europe. Many of the cases involve counterfeit Captagon, a synthetic drug that Hezbollah operatives began manufacturing more than a decade ago and has gained prominence as a moneymaker as the group’s military and financial commitments have expanded, intelligence analysts say. […]

The most recent drug cases suggest a collaboration among a diverse array of actors, including Syrian business executives with ties to the Assad government as well as organized crime families, U.S. and Middle Eastern officials said. Coordinating the logistics — and sharing the profits — are operatives from Hezbollah, with support from Iran’s Islamic Revolutionary Guard Corps, the officials said.”

Sommerville’s filmed report clearly did not provide BBC audiences with much information about what is obviously a bigger story.

For years the BBC has downplayed Hizballah’s designation as a terrorist organisation, describing it in its online profile as “a Shia Islamist political, military and social organisation” and promoting the myth of separate ‘wings’ to the group. A similarly superficial approach appears to be being taken by the producer of “news that you can trust” towards Hizballah’s criminal operations.