Though we’ve published two posts calling out The Times and Telegraph for erroneously suggesting that Israel was responsible for the COVID-19 vaccinations of Palestinians governed by the Palestinian Authority, and that Jerusalem wasn’t abiding by their obligations, today’s Guardian article takes this smear to the next level.

First, here’s a short recap of our refutation of the articles in The Times and Telegraph:

Now, turning to the piece in the Observer (sister site of the Guardian), written by Oliver Holmes and Hazem Balousha:

Whilst both The Times and Telegraph (the latter of which improved their article after our complaint) only devoted a single sentence in their articles to the Palestinian vaccination question,  the Guardian devoted an entire article to it – which is framed in a way to impute maximum malevolence to Israel: 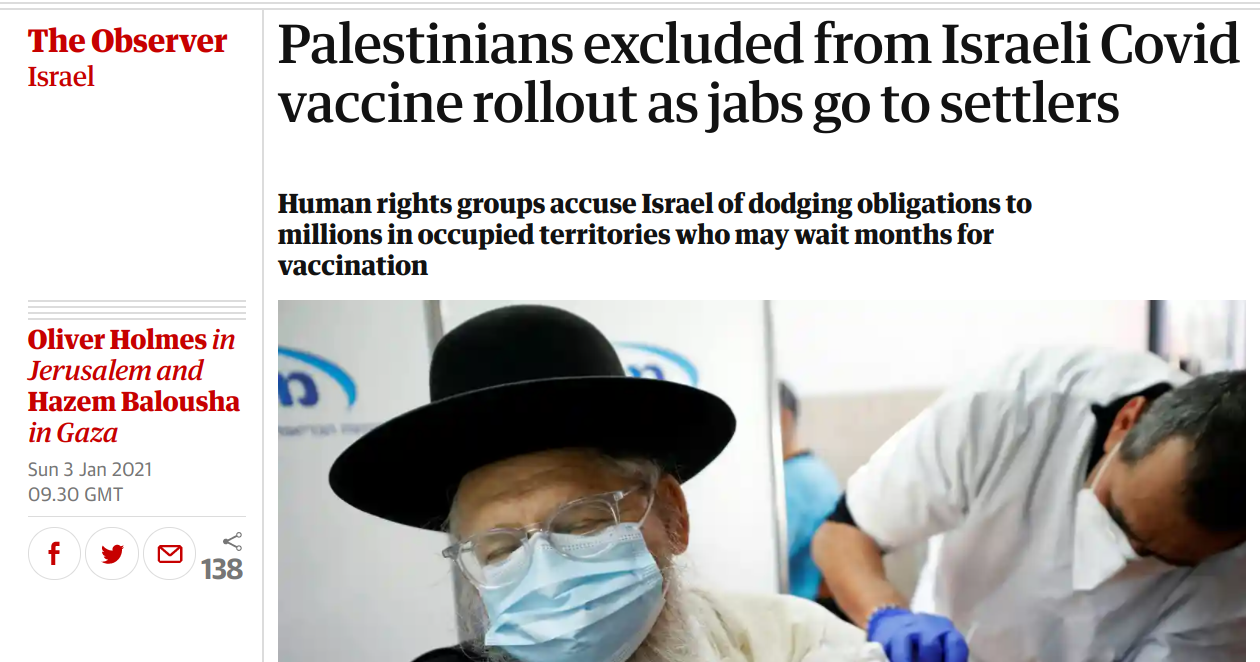 The article not only leads with the false narrative, but, in a manner likely to garner more clicks from readers who turn to the Guardian because to their hostility to Israel, suggested that settlers – the segment of Israel’s population most frequently demonised by the media group – were unfairly getting vaccinations that could have gone to Palestinians.

Also, the fact that editors illustrated the article with a photo of an Ultra-Orthodox Jew receiving a jab – despite the fact they make up only 12 percent of the population – wouldn’t come as a surprise to CAMERA UK readers.

The text of the article begins with the desired narrative:

Israel is celebrating an impressive, record-setting vaccination drive, having given initial jabs of coronavirus shots to more than a 10th of the population. But Palestinians in the Israeli-occupied West Bank and Gaza can only watch and wait.

Israel transports batches of the Pfizer/BioNTech vaccine deep inside the West Bank. But they are only distributed to Jewish settlers, and not the roughly 2.7 million Palestinians living around them who may have to wait for weeks or months.

In fairness, further in the article, Holmes does note that the PA is working on securing their own vaccine supply and that they have not asked Israel for help – and later adds that “coordination between the two sides halted last year after the Palestinian president cut off security ties for several months”.

Holmes also acknowledges that “Israeli officials have suggested they might provide surplus vaccines to Palestinians” and alludes to Oslo agreement “that required the authority to observe international vaccination standards”, but then uncritically cites “Israeli, Palestinian and international rights groups have accused Israel of dodging moral, humanitarian and legal obligations as an occupying power during the pandemic”.

Yet, Holmes fails to critically examine the claims of these NGOs, nor seek comment from NGO Monitor, the watchdog group which, for years, has been documenting the fact that these groups are highly partisan, and routinely exploit and distort the term “human rights’ to demonise Israel.

So, whilst the article does offer a bit of balance, any nuance or sense of the complexity of the situation is lost in the broader framing – as demonsrated in the headline, strap line, photo and opening sentences.

First, the Guardian sentence we highlighted, painting a picture of Israel transporting batches of the vaccine deep inside the West Bank to settlers, but not to the millions of Palestinians living around them, is no more relevant than the UK government transporting batches of the vaccine to Newry in Northern Ireland, but not to Dundalk, a mere 20 km away in the Republic of Ireland.

As we’ve noted, the PA has their own healthcare system, and their own vaccine acquisition and distribution regime – and, again, has not asked Jerusalem for assistance in this regard.

Palestinian, contrary to the Guardian headline, are not being “excluded” from Israeli distribution of the vaccine for the simple reason that they were never included – nor did they ask to be included – in the first place.  Israeli ‘settlers, those living east of the 1949 Armistice Lines, are Israeli citizens. Palestinians living under Palestinian rule are not.

However, in addition to the false premise of the headline and text, there’s another dynamic at play: the Guardian’s framing of Israel’s successes – economic, diplomatic or, in this case, regarding positive healthcare outcomes – not as the result of sound public policy but, rather, the product of an unjust system which privileges Israelis at the expense of the Palestinians.

This zero-sum framing, in which Israeli gains are measured against Palestinian losses, the latter assumed to be connected to the former, not only denies Palestinians agency, but deters journalists from critically scrutinising the PA to determine how their decisions may have contributed to their misfortune.

Questions not asked by reporters include:

Guardian journalists won’t ask these questions, because to do so requires accepting that bad Palestinian decisions invariably produce bad outcomes for their population – the adoption of a view of Palestinians as not merely victims that would represent a radical break from decades of reporting, and implicitly acknowledge the profound cognitive distortion that fuels their demonisation of the Jewish state.

Like Loading...
Tags from the story
COVID-19, Delegitimization, Guardian, Israel, Oliver Holmes, The Palestinian Authority
Written By
Adam Levick
More from Adam Levick
We recently complained to Telegraph editors about a claim on the number...
Read More