Over the past fourteen months, several BBC News website articles relating to the topic of Iran’s nuclear programme have included a graphic titled “Changes agreed under Iran deal to limit nuclear programme”. 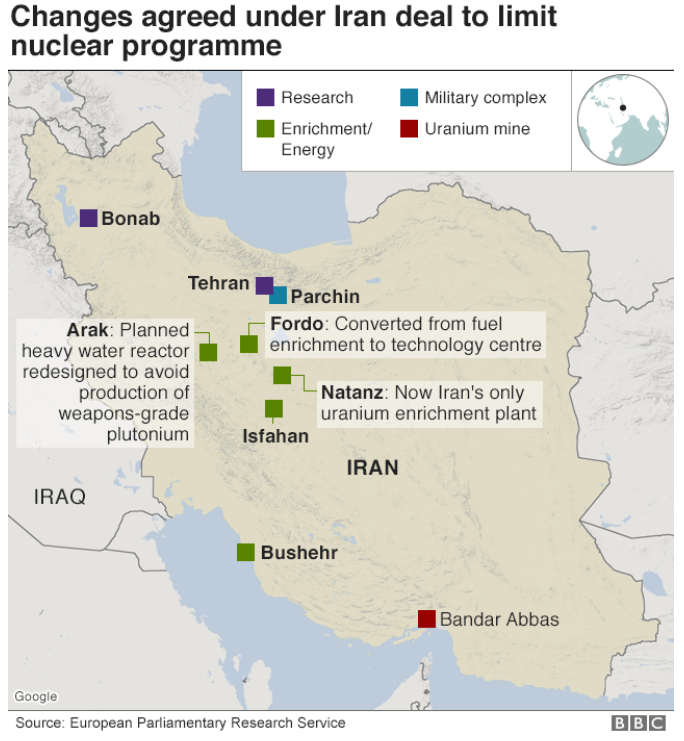 That illustration was most recently found in an article by BBC security correspondent Frank Gardner which appeared on the BBC News website on January 19th under the headline “Why Iran’s nuclear facilities are still vulnerable to attack”. 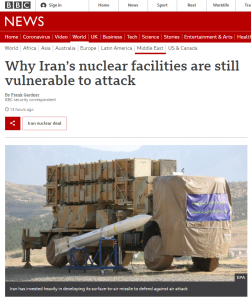 As has been the case on previous occasions (see ‘related articles’ below for some examples), insufficient effort was made to clarify to readers that the illustration does not reflect the reality of the current situation.

While the illustration tells readers that “changes agreed” under the JCPOA included Fordo being “converted from fuel enrichment to technology centre”, they are not informed that Iran did not comply with that requirement – as the BBC presumably knows because it reported the IAEA’s statement concerning uranium enrichment at that site earlier this month. Neither are readers of this article given any information about construction and development projects at two of the other sites named on the map – Arak and Natanz.

The provision of a graphic listing “changes agreed” years ago is clearly of little value if no mention is made of breaches of those agreements such as the one which prompted three of the parties that negotiated the JCPOA agreement to recently issue a joint statement  – which went unmentioned by Gardner – describing themselves as “deeply concerned” by “potentially grave military implications”.

The main theme in Gardner’s article is a theoretical future attack by Israel on Iranian nuclear facilities he portrays as “civilian” or “peaceful”.

“Israel remains extremely concerned, not just by Iran’s civilian nuclear activities but by its prolific programme to develop its arsenal of ballistic missiles.”

“Iran has always insisted its nuclear programme is purely peaceful…”

“Iran’s nuclear industry, while ostensibly civilian, is closely entwined with its military and security infrastructure.”

Gardner makes no effort to inform readers that – as the BBC knows – in December 2015 (after the JCPOA had already been agreed) the International Atomic Energy Agency produced a report which stated that:

‘…the agency “assesses that a range of activities relevant to the development of a nuclear explosive device were conducted in Iran prior to the end of 2003 as a coordinated effort, and some activities took place” up to 2009.’

The BBC also knows that in April 2018 Israel revealed documents from Iran’s nuclear archive which raised new issues. Although Gardner attributes the assassination of Mohsen Fakhrizadeh to Israel in his article without providing any evidence, he fails to note the fact that Fakhrizadeh was a senior officer in the IRGC or to give an adequate portrayal of his activities at the time of his death, stating only:

“…Fakhrizadeh – known as “the godfather of Iran’s nuclear programme”, who US intelligence says carried out covert work on nuclear weapons – was assassinated.”

Once again a BBC report concerning Iran’s nuclear programme amplifies Iranian talking points concerning its supposedly ‘peaceful’ nuclear programme and unevidenced claims of Israeli responsibility for assorted actions but makes little effort to provide BBC audiences with an objective and up to date account of Iran’s activities on that front and the significance of its repeated breaches of the JCPOA agreement.