As we have already seen, despite having acknowledged on its ‘corrections and clarifications’ page on February 9th that under the terms of the Oslo Accords the Palestinian Authority controls the healthcare of Palestinians, the BBC continues to cloud audience understanding of that issue.

Another example appeared in the February 14th edition of the BBC Radio 4’s ‘The World This Weekend’ when presenter Edward Stourton introduced an item (from 06:13 here) about potential ‘vaccine passports’. 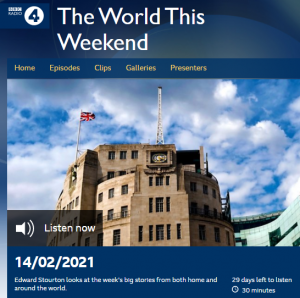 Stourton: “Denmark and Sweden are reported to be actively planning a vaccine passport, as is Israel which has vaccinated a higher proportion of its citizens than any other country, though we should add the rate is much lower among Palestinians in the occupied territories.” [emphasis added]

The BBC knows full well that Article 17 of the 1995 Oslo II agreement includes the following:

That is why, following a complaint, it put out the February 9th clarification stating:

“We suggested that under the Oslo Accords, Palestinian healthcare is ultimately the responsibility of the Israeli government.

Although there is a wider dispute over the issue, the Accords – which Israel signed with the Palestine Liberation Organisation – give the Palestinian Authority oversight of public health under the principles of self-determination.”

Nevertheless, five days after that clarification was issued Stourton misled listeners by implying that a “much lower” rate of vaccinations among Palestinians has something to do with Israel.

Similarly, an article by health reporter Rachel Schraer published on the BBC News website on February 15th under the confusing headline “Covid-19: Vaccine as good in ‘real world’ as in trial in Israel” closes with the following: 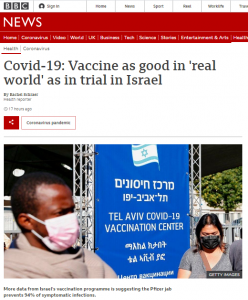 “The country [Israel] has also been met with criticism over questions about who should provide vaccines to the Palestinian territories.

Israel has only just also started to transfer some doses to Palestinians in the West Bank and Gaza, so that vaccinations can begin for front-line health workers.

Meanwhile it has given the full two doses to a quarter of its resident population.”

That link directs readers to an article by the BBC’s ‘Reality Check’ department originally published on January 26th and previously discussed here. Although it has since undergone numerous amendments including a change of headline, that article still fails to actually inform BBC audiences “whose responsibility it is to vaccinate Palestinians” and instead continues to promote politically motivated claims and statements on that subject.