On Saturday, the Deputy leader of the Labour Party, Angela Rayner, tweeted about new Scottish Labour leader Anas Sarwar, who’s of Pakistani descent, hailing him as the first ever ethnic minority party leader, a claim which came as a surprise to those who recall that there have been four Jewish party leaders.

And a day later she still feels no need to correct or delete her tweet https://t.co/JGSGcoX9Zl

BBC Politics Live aired a segment on the row yesterday, and invited four non-Jews on the programme to share their views on how Judaism should be defined, whilst a a banner at the bottom of the screen read: “Should Jews Count As An Ethnic Minority?”. 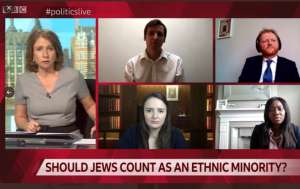 After that panel segment, journalist Benjamin Cohen, CEO of Pink News, was interviewed by the BBC presenter, Jo Coburn (who herself is Jewish), and asked him the following question:

“Benjamin, isn’t there a wider point, that actually perhaps the fact that Angela Rayner didn’t immediately recognise previous Jewish political leaders in her tweet underlines the fact that many Jews have succeeded in reaching high political office and therefore don’t need to be seen as a group need recognition [as ethnic minorities] as the same way as others.”

Cohen made good points, but there are a few others worth exploring in response to Coburn’s querey.

First, let’s remember that the term “ethnic minority” has a straightforward meaning, one which clearly includes Jews:

A group within a community which has different national or cultural traditions from the main population.

Let’s also remember, as The Jewish Chronicle’s Jonathan Sacerdoti noted in a recent Spectator article, Jews have been recognised by British courts, under the Race Relations Act, as a distinct racial/ethnic group.

However, beyond the fact that, by virtue of the plain meaning of the term, and as codified by British law, Jews are in fact ethnic minorities, the BBC presenter gave voice to a broader narrative: that Jews, by virtue of their relative success, don’t really count any more as ‘oppressed minorities’ in the way other less successful ethnic and racial minorities do.

First, as Cohen articulated in his response to Coburn, the Labour antisemitism scandal under Jeremy Corbyn, and historic levels of antisemitism in the UK more broadly, clearly belies the suggestion that ‘successful Jews’ can’t be victims of racism – to the point that a large percentage of these ‘successful Jews’ believed that Jewish life in the UK was in serious danger.

But, even leaving aside the correlation between a group’s minority status and the degree to which they are victimised by racism, the suggestion that Jewish political, economic or educational success can negate their ethnic minority status holds Jews to a standard that no other minority is held do.

Would anyone question whether, for instance, British Sikhs, who, as a group, are wealthier than the average population, are a genuine ethnic minority?

In the United States, many African and South Asian immigrants are extremely successful.  Sub-Saharan immigrants in the US, for instance, are more highly educated, and have a higher employment rate, than the native-born population.  Also, Indian immigrants in the US – which includes Vice President Kamala Harris’s late mother – have a a median annual household income of $100,000—nearly double the median for all U.S. households.

Would BBC air a programme debating whether Americans of South Asian descent like Kamala Harris are really ethnic minorities, in light of the extraordinary success – economically and politically – of the South Asian community?  Of course not.

Though Jewish success may explain, to some extent, the deputy Labour leader’s tweet and the BBC presenter’s query, we believe there may be something else at play: the (misleading) perception of Jews as white in the context of increasingly influential ideologies which frame the black and white colour line as a moral dividing line between oppressed and oppressor.

If you subscribe to or are significantly influenced by the view that Jews are, for all intents and purposes, ‘white’ (as opposed to ‘people of colour’ or BAME), and therefore the recipients of white privilege, and benefit from, or even collaborate with, the ‘system’ of white supremacy, then you can see how their bonafides as ‘legitimate’ ethnic minorities would be suspect.

As Barri Weiss framed it, Jews – via intersectionality, critical race theory and identity politics, which promote a racial essentialist view of human interactions, power relations and unequal outcomes, and fails to grasp the multi-faceted nature of Jewishness –  have been “flattened into white people”.  The British Jewish comedian and writer David Baddiel observed, in his new book on antisemitism, that “Jews aren’t treated as an ethnic minority because they are seen as white and thus, automatically on the side of the rich, powerful and privileged”.

The title of Baddiel’s book, “Jews Don’t Count”, refers to the West’s blind spot when it comes to racism targeting Jews, a profound ignorance regarding the existential challenges still faced by of one of the world’s smallest historically persecuted minority groups that was on full display at the BBC.