Visitors to the BBC News website’s ‘Middle East’ page on the morning of May 23rd found this: 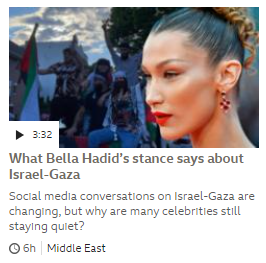 The link leads to a filmed report titled “Israel-Gaza: What Bella Hadid’s stance says about changing conversations” made by Ramallah-based Tala Halawa of BBC Monitoring. 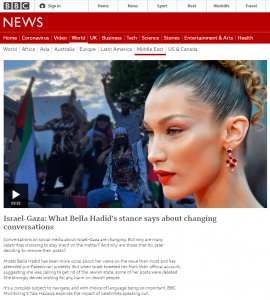 “Conversations on social media about Israel-Gaza are changing. But why are many celebrities choosing to stay silent on the matter? And why are those that do, later deciding to remove their posts?

Model Bella Hadid has been more vocal about her views on the issue than most and has attended pro-Palestinian protests. But when Israel tweeted her from their official account, suggesting she was calling to get rid of the Jewish state, some of her posts were deleted. She strongly denies wishing for any harm on Jewish people.

It’s a complex subject to navigate, and with choice of language being so important, BBC Monitoring’s Tala Hallawa explores the impact of celebrities speaking out.”

At the beginning of her film, Halawa once again asks: “But why does much of the celebrity world continue to stay silent on the situation?”

Many people are of course are quite relieved when they come across individuals who do not believe that the public is hungry to hear their opinions on a complex geo-political situation just because they made a name in sports, acting, singing or some other entirely unrelated field. Halawa obviously does not share the view that a high number of social media followers does not translate into a certificate of expertise on subject of the Arab-Israeli conflict.

The focus of Halawa’s film is a video of an anti-Israel protest put out by the American fashion model Bella Hadid.

Halawa: “But it was this video that led to condemnation from Israel’s official Twitter page. The accusation from Israel is extremely serious. They claim she’s advocating for Jews to be ‘thrown into the sea’.”

Halawa next presents the video in question which shows people shouting the familiar chant ‘from the river to the sea Palestine will be free’ and ‘free, free Palestine’. She then ‘explains’ that chant to BBC audiences.

Halawa: “Whilst Israel has labelled the chant as anti-Semitic, the slogan has been used by Palestinian activists across the world and it refers to the River Jordan and the Mediterranean Sea, which formed the boundaries of Palestine after World War One and part of which became the State of Israel.”

Of course the fact that the chant “has been used by Palestinian activists across the world” does not mean that it is not antisemitic. The AJC defines it as: “the catch-all phrase symbolizing Palestinian control over the entire territory of Israel’s borders, from the Jordan River to the Mediterranean Sea”, explaining that:

““From the River to the Sea, Palestine Will Be Free” is a common call-to-arms for pro-Palestinian activists. It calls for the establishment of a State of Palestine from the Jordan River to the Mediterranean Sea, erasing the State of Israel and its people. It is also a rallying cry for terrorist groups and their sympathizers, from the Popular Front for the Liberation of Palestine (PFLP) to Hamas, which called for Israel’s destruction in its original governing charter in 1988.

Sometimes the Palestinian flag emoji is used as shorthand for this phrase to spam social media posts related to Jews, whether having to do with Israel or not. There is of course nothing antisemitic about advocating for Palestinians to have their own state. However, calling for the elimination of the Jewish state, or suggesting that the Jews alone do not have the right to self-determination, is antisemitic.”

Whether used as a call for the expulsion of Jews from their state or – as some claim – for the promotion of a bi-national state in which Jews would be an ethnic minority, the essence is the same: the negation of the right of Jews to self-determination and that – according to the IHRA definition – is antisemitism which Halawa – perhaps not surprisingly given her own record on social media – clearly refuses to recognise.

Halawa brings in a commentator called Ayesha Siddiqi to promote the risible claim that social media is contributing to public knowledge of the Arab-Israeli conflict.

Halawa: “Social media is presenting a complex discourse given the fact that anyone, anywhere can be a content creator.”

Siddiqi: “More people having access to that testimony, particularly on Twitter and Snapchat, more and more people are presented with factual, video-based evidence and so there’s no longer intermediaries between what’s happening on the ground there and what we’re told about it here.” [emphasis added]

As we have been documenting for years, social media has in fact had a negative effect on public knowledge and understanding because it is used by anti-Israel activists for propaganda purposes.

Tala Halawa’s pitch to whitewash an antisemitic slogan heard at all too many anti-Israel events around the world should obviously have raised editorial eyebrows at BBC Monitoring and BBC News before it ever saw the light of day. Had that been the case, the BBC might have avoided yet more bad publicity and the need to remove Halawa’s report from its prominent placing on the BBC News website’s ‘Middle East’ page just hours after it was published.

Instead, Halawa was given publicly funded resources to promote her personal political agenda under the guise of ‘building people’s understanding’ on a platform that claims to provide “news that you can trust”.

On June 11th the Jewish Chronicle reported that:

“After Ms Halawa’s tweets were brought to light last month, the BBC launched an investigation.

Today, a senior corporation source confirmed that the investigation had concluded, adding: “This individual no longer works for the BBC.””

Nevertheless, the above item is still available online.

BBC MONITORING CLAIMS TO TAKE ON THE ‘MANIPULATION OF MESSAGING’