Earlier in the week, we posted about a long Guardian op-ed by Peter Beinart, an American Jew who opposes Israel’s existence, which called for the unlimited Palestinian right of return.  That piece was published on May 18th.  Two days later, the Guardian published an op-ed by the anti-Zionist Israeli Jew Asaf Ronel, a journalist who recently resigned from Haaretz because it wasn’t pro-Palestinian enough.

On May 22, the Guardian published another op-ed by an American Jew who opposes Israel’s existence.  The piece (“Jewish Americans are at a turning point with Israel”) was written by Arielle Angel – Beinart’s colleague at the anti-Zionist publication Jewish Currents.

The piece included, as its featured image, a photo of an elderly lady with a placard saying that “Zionism is Genocide”. 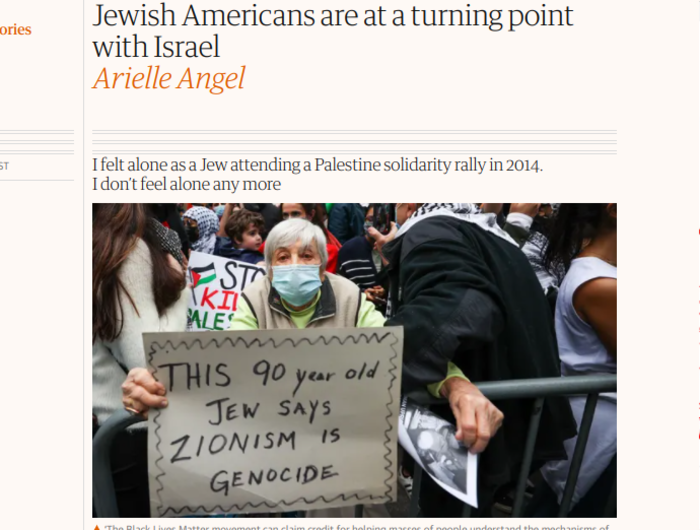 On Nakba Day, 15 May, amid the outbreak of war in Israel/Palestine, I attended a rally in Bay Ridge in Brooklyn, to commemorate the expulsion of more than 700,000 Palestinians from the new Israeli state in 1948, and to protest against the oppression of the Palestinian people in the land between the river and the sea.

Not even the Guardian claims that all 700,000 Palestinians in 1948 were “expelled”, only that some were expelled and most fled, either to escape the war or at the behest of the Palestinian leadership.  As historian Benny Morris demonsrated, there was no Zionist expulsion policy before or during the war.

Moreover, it’s the height of dishonesty for Angel to elide the context of the Palestinian flight: an Arab war of annihilation against the nascent Jewish state.

Angel then flashes back to 2014, and writes,

“An ardent Zionist until that point, my worldview had been profoundly shaken by the images in the papers – Palestinian children bombed to pieces on a beach; Israelis in the rattled buffer town of Sderot gathered on hilltops overlooking the Strip, cheering as the bombs fell.

As we demonsrated at the time, the “images” and words “in the papers” didn’t tell an accurate story.  Residents of Sderot, a city which has born the greatest brunt of terrorist rocket fire, and where a large percentage of children suffer from PTSD, were showing their support for IDF attacks on Hamas targets, not, as many were led to believe, on Palestinian civilians.

My heart raced when chants broke out of “From the river to the sea, Palestine will be free” – a popular protest slogan calling for equality in a single democratic state, which Jews have long been told amounts to their expulsion.

As our colleague Gilead Ini has explained, “one doesn’t need a cipher, but just a simple map”, as well as a basic understanding of Hamas ideology, “to understand that the passage refers to the elimination of Israel”.

Angel then boasts of a growing movement of American Jews who are asking questions, such as “the circumstances surrounding the expulsions of Palestinians from their homes in Sheikh Jarrah, for instance, or the affiliations of the Jewish revelers dancing ecstatically opposite a fire on the Temple Mount…”.

As CAMERA has explained, there is no Israeli planned expulsion of Palestinians from their homes.  What’s at issue is a decades long legal case involving Palestinians tenants who’ve lived in Jewish own property, but has refused to pay rent and face eviction.

W’ve also refuted the claim, by Angel and some media outlets, that Jews were “dancing ecstatically opposite a fire on the Temple Mount”.   First, the fire was started by Palestinians on the Temple Mount, who threw fireworks in the direction of Jews praying at the Western Wall. One of the fireworks hit a tree on the (Temple Mount/Al-Aqsa) compound, and it caught fire.  Further, the song being sung by Jews at the time of the fire has been sung all through the day – with no evidence indicating that it broke out when they saw the fire.  Finally, of course, we asked in our post, why would Jews be celebrating a fire at the Temple Mount – the holiest site in Judaism?

Angel then introduces Black Lives Matter to his op-ed, to help explain why ‘many’ Jews have putatively joined the pro-Palestinian side:

The Black Lives Matter movement can claim credit for helping masses of people understand the mechanisms of structural racism and oppression, and for consistently linking the Black struggle to the Palestinian one. White people, including white Jews, who spent last summer confronting their own complicity in anti-Blackness or their discomfort with the force of abolitionist demands like “defund the police”, are perhaps finding themselves prepared to face similar complicities and discomforts in relation to Palestinian liberation.

As Matti Friedman eloquently explained in a recent op-ed at the Atlantic on the jumbling of the Israeli-Palestinian conflict with US racial dynamics, “the story of the Jewish minority in Europe and in the Islamic world, which is the story of Israel, has nothing to do with race in America”.  Friedman continued:

If you stand on a street in the modern state of Israel and look at passersby, you often can’t tell who’s Jewish and who’s Arab. Many Israelis are from Arab countries, and for the 6 million Jews living in the heart of the Arab world (300 million people) and in the broader Islamic world (1.5 billion people), the question of who’s the minority is obviously a tricky one. Most Black people here are Jews with roots in Ethiopia. The occupation of the West Bank is supported by many Israelis mainly because they have rational fears of rockets and suicide bombings, tactics that weren’t quite the ones endorsed by the American civil-rights movement.

Just as 2014 produced new infrastructure in the Jewish community to encourage dissent, I am certain that this moment will prove pivotal in a changing Jewish American conversation about Israel/Palestine.

Angel – much like the Guardian, in their amplification of such voices – wants readers to believe that he’s in the vanguard of a growing movement within the Jewish community that opposes the continued existence of the Jewish state.

However, the data simply doesn’t back up this assertion.

A 2020 poll by American Jewish Committee – the oldest and, arguably, most prestigious US Jewish group –  shows, in fact, that the overwhelming majority of American Jews (85%) not only don’t identify with anti-Zionism, but believe the rejection of Israel’s right to exist is antisemitic – a number almost identical to those of their 2019 poll.

Given that a mere 14% believe it’s NOT antisemitic to reject Israel’s right to exist, we can infer that a much smaller number are actually anti-Zionist, since we can safely assume that there are a good number of Jews who may not think anti-Zionism is necessarily antisemitic, but who don’t hold anti-Zionist views themselves.

The very premise of Angel’s op-ed – much like his specific claims about Israeli hisotry and the recent violence – is based on a lie.