It’s an all too familiar sight for British Jews: conflict erupts thousands of miles away and protesters in their own ‘green and pleasant land’ immediately take to the streets with trite slogans, baseless allegations, antisemitic imagery and sometimes acts of violence.

During and after the 2014 conflict between terrorist groups in the Gaza Strip and Israel, we documented BBC coverage of such protests on its domestic patch.

HOW DID BBC NEWS COVER THIS SUMMER’S ANTI-ISRAEL DEMONSTRATIONS IN THE UK?

“By failing to provide audiences with a comprehensive picture of the records and political agendas of the fringe groups which organised these demonstrations – along with the highly relevant topic of their links to repressive regimes in the Middle East – the BBC created the false impression that those demonstrations galvanised around a consensus issue for ordinary members of the British public. By refraining from reporting on the antisemitic imagery and slogans used on numerous occasions by some participants in the demonstrations, the BBC denied audiences a view of the real motivations underpinning their organisation and messaging.”

In the wake of the UK Labour party antisemitism scandals from 2015 onwards, one might perhaps have expected that the BBC’s ear would be by now better tuned and that it would try to provide domestic (and foreign) audiences with a more accurate and impartial account of events on its own home turf.

Let’s begin outside the BBC offices in the Welsh capital, Cardiff.

On May 22nd a report headlined “Hundreds demand ‘free Palestine’ at Cardiff protest” was published on the BBC News website’s ‘Wales’ page and placed in the ‘updates’ section of the same website’s ‘Middle East’ page.

“About 400 protesters gathered in Cardiff calling for a “free Palestine” as rallies were also held in Manchester and London. […]

The protest was held outside BBC Cymru Wales’ offices.

It was organised by the Cardiff Palestine Solidarity Campaign.

“This has to stop,” said Mohammed Hadia, one of the organisers, who said more than 60 children were among the fatalities in Gaza.

“The West and the international community has to stand up and say this is enough.””

That promoted link leads readers to a BBC report which fails to clarify that one of the children it features was actually killed – along with other members of his family – by a rocket fired by a Palestinian terror group.

As we see, the BBC does not provide any information concerning the Cardiff branch of the Palestine Solidarity Campaign, its parent organisation (including its long record of antisemitism) or the Swansea university employee whose talking points it chose to promote.

Neither does the BBC bother to inform its audiences about the pernicious and defamatory lies promoted by participants in that event. 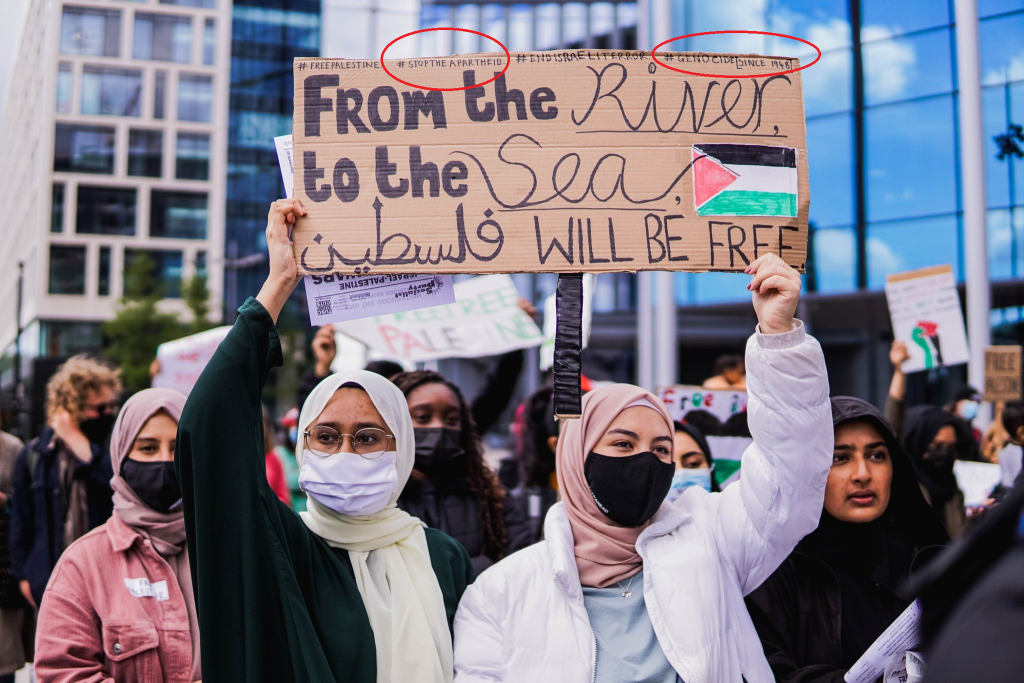 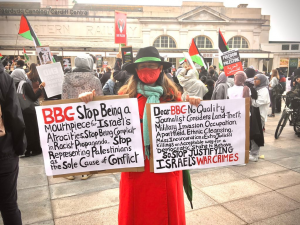 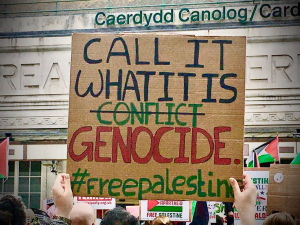 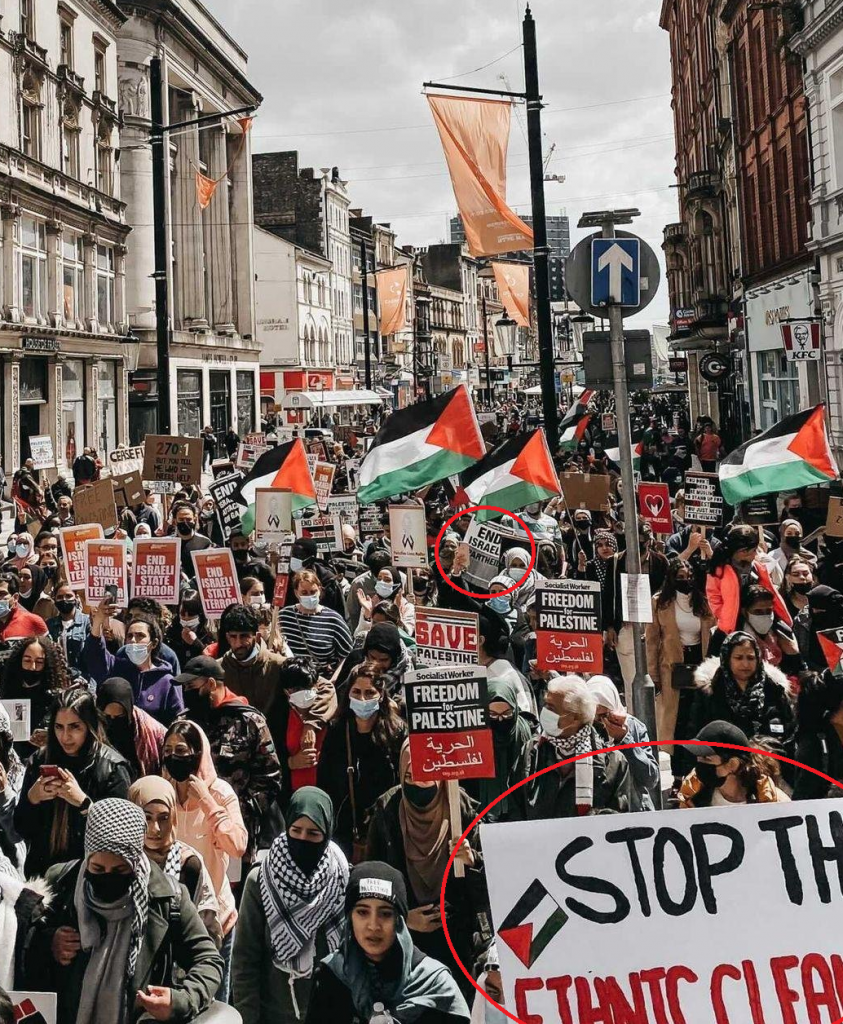 When the BBC chooses to turn a blind eye to the real nature of a demonstration right outside one of its own offices, one must surely ask how it can be trusted to accurately report events thousands of miles away.

On May 16th a report titled “Hundreds gather in Glasgow’s George Square for pro-Palestinian rally” was published on the BBC News website’s ‘Scotland – Glasgow & West’ page as well as in the ‘updates’ section of the same website’s ‘Middle East’ page.

“Hundreds of demonstrators have gathered in Glasgow’s George Square for a pro-Palestinian rally.

Protesters shouted “free Palestine” during what organisers insisted was a peaceful demonstration on Sunday.”

The BBC obviously thought it appropriate to unquestioningly promote a defamatory and inflammatory falsehood from a partial political activist.

“Ahead of the Glasgow rally, civil liberties lawyer Aamer Anwar tweeted that “1000s will gather peacefully with families & no alcohol, to protest the genocide of Palestinians.”” [emphasis added]

It therefore comes as no surprise to see that the BBC avoided telling readers that that lie and others were also evident at the “peaceful demonstration”. 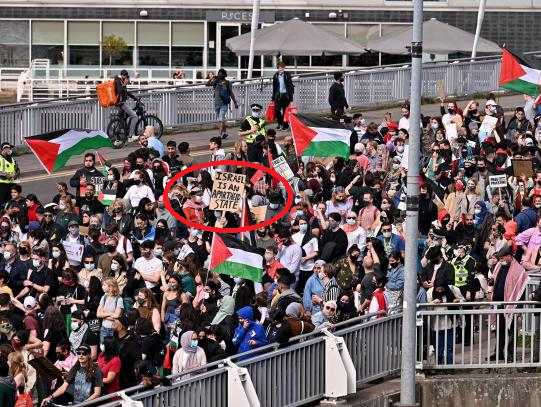 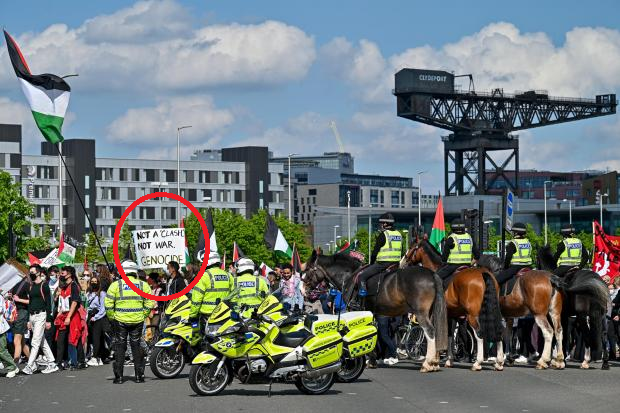 A May 15th report by Jo Couzens about a demonstration in London – “Thousands protest in London over Israel-Gaza violence” – likewise uncritically promoted baseless propaganda from interested parties it did not adequately identify and explain.

“The organisers of the protest called on the UK government to stop allowing what they described as “Israel’s brutal violence against and oppression of the Palestinian people”. […]

The demonstration in London has been organised by the Palestine Solidarity Campaign, Friends of Al-Aqsa, Palestinian Forum in Britain, Stop The War Coalition, Campaign for Nuclear Disarmament and the Muslim Association of Britain.

A spokesperson for the organisers said: “It is vital that the UK government takes immediate action.

“It must stop allowing Israel’s brutal violence against and oppression of the Palestinian people to go unpunished.”

They said the bombardment of Gaza “which is killing civilians including children is a war crime“, adding: “The UK government is complicit in these acts as long as it continues to offer Israel military, diplomatic and financial support.”” [emphasis added]

In a May 22nd report about another London demonstration the following week  – “Pro-Palestinian rallies held in Manchester, London and Cardiff” – the BBC chose to promote the opinions of the then leader of a political party investigated for institutional antisemitism.

He told the crowds that children should not have to see their homes demolished by bombs dropped from above.

Readers were told nothing of the antisemitism and violence on display at that event. 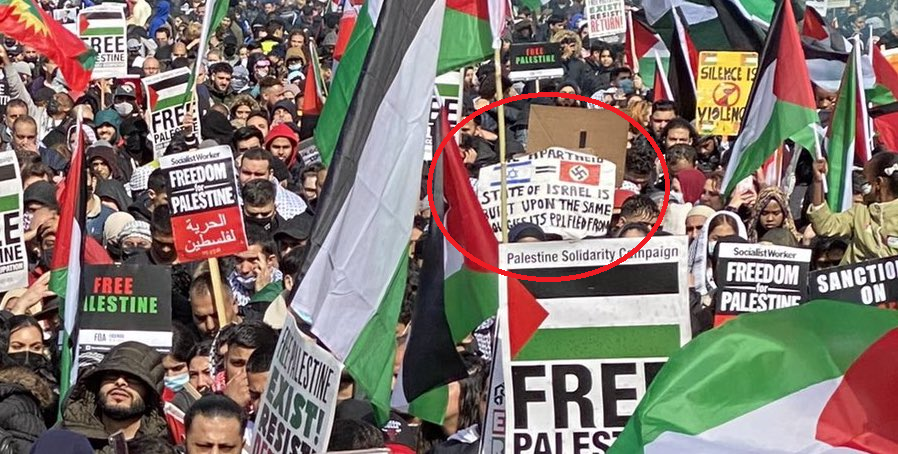 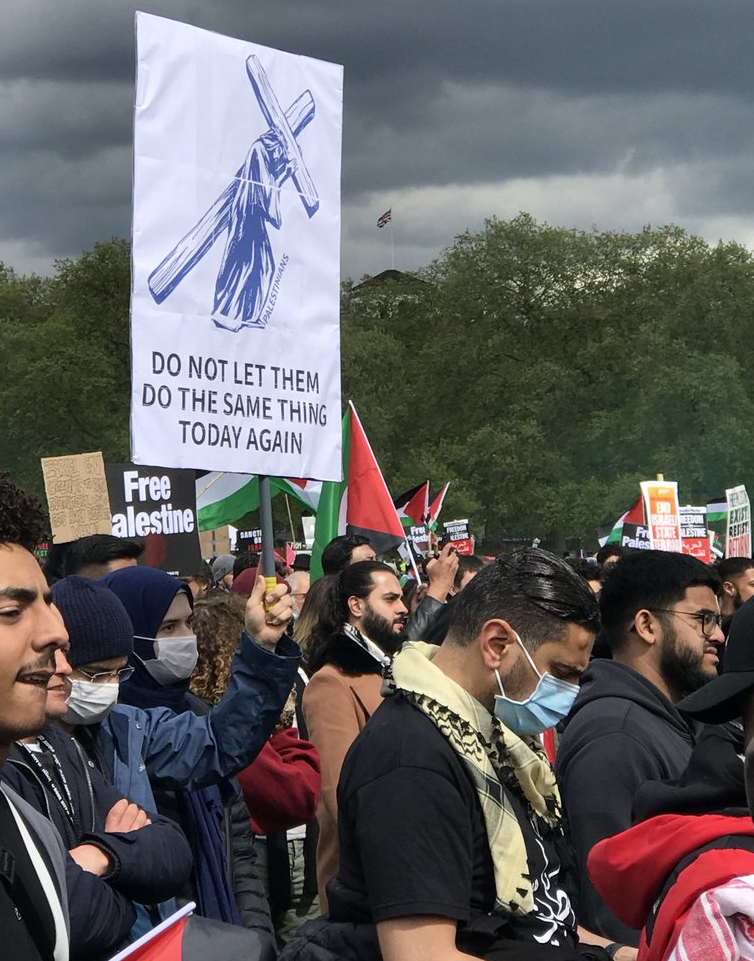 Similar antisemitism and hate speech was on display in additional locations in the UK including Nottingham, Birmingham, Leeds and Manchester.

The ‘public purposes‘ defined for Britain’s publicly funded national broadcaster include the following:

“The BBC should bring people together for shared experiences and help contribute to the social cohesion and wellbeing of the United Kingdom.”

The BBC however continues its long tradition of whitewashing the hateful propaganda and antisemitism regularly seen at such events while uncritically promoting the canards of participants and organisers it avoids adequately explaining – all as antisemitism once again surges in the UK.